F1 on NBCSN: Russia 2014 This should be a week where excitement is high and interest in the upcoming F1 race is keen.  Any time you visit a new circuit, there's supposed to be a whiff of anticipation in the air.  The events at the end of this past weekend's Grand Prix of Japan, however, have cast a pall over the anticipated proceedings.  It's difficult to imagine how the drivers and teams feel... I'm sure it's a mix of "it can't happen to me" and "holy crap."  But if they can sit in the cockpits of their high-tech-high-speed cars, I can suck it up and guide you on a tour of the new Sochi Autodrom, home of the 2014 Grand Prix of Russia. 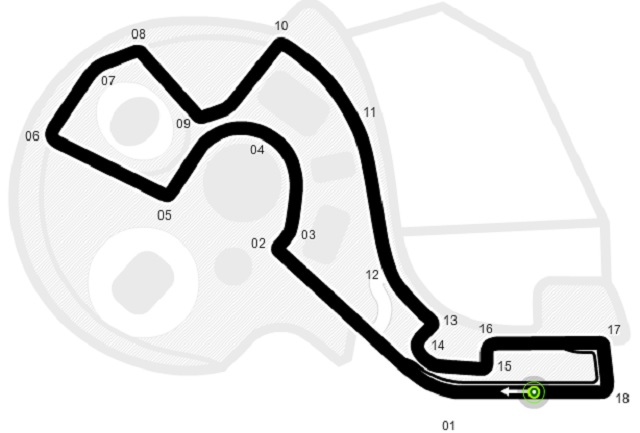 There's a distinct whiff of Valencia here, in that it's a "street circuit" that winds through the Olympic Village, but without any of the drama of an actual street circuit like Monaco or even Singapore.  This video makes it fairly clear that it's a Hermann Tilke design, full of flow-killing right-angle turns.  To the circuit's credit, Turns 01, 11 and 12 seem like they'll be more suggestions than actual turns, at least in a F1 car.  The big horseshoe left-hander promises to be a real neck-stretcher, though how good it'll be for racing is another question.  Turn 02 will probably be the big passing zone, with 06 and 13 earning marks in that category as well... at least, just by looking at the map.

It's a wide track, though not so immense as Valencia, where you could put four cars side by side and have room left over.  With concrete barriers right up against the track, one wanders offline at one's peril.  The guess is that the asphalt will be smooth and slick, which is why Pirelli is bringing the Soft and Medium compounds for tire choices; it'll give good performance without being too conservative... unless the surface was secretly made out of ground glass and razor blades.

Basically the circuit will come down to how hard the right-angle turns are on the actual racing.  Fortunately for us, the good zeks of the Legendary Announce Team will be bringing us their usual sterling commentary on the following schedule:
FRIDAY
Practice 2: 5am - 630am live
SATURDAY
Quals: 6am - 730am live
SUNDAY
Grand Prix of Russia: 530am - 8am live

One interesting bit of news regarding the race... teams are not going to be allowed to bring in any upgrades.  Not by FIA regulations, but because of the ongoing embargo against Russia regarding the ongoing mess in Ukraine.  The teams can bring their stuff from Japan, but spare parts from, say, Woking, are banned.  We'll see how that works out.  See you this weekend!

1 You laugh, but they actually DO use ground glass in making asphalt here. Turns out it's pretty much the only thing that's cost-effective to do with recycled glass since shipping it elsewhere would cost a mint...

(No razor blades, but maybe if they had some kind of metal in the roads and not just antediluvian layers of asphalt, there wouldn't be so damn many potholes...)

2 Did everyone get packed in Japan and shipped out? Or are they waiting out the storm?

3 I retract my question; looks like the storm is long past.

4 Steven, it was still a fair question.  Lotus is in Sochi, they got in around 8pm Pond Central Time Monday, somewhere between six and 12 hours behind normal schedule.  The delay, of course, was typhoon related.

I guess I always figured that the teams went in together on planning how to move from each race to the next. After all, they're all going to the same place, so why not charter a 747 passenger jet for all the crews, and one or two 747 cargo jets to carry all the equipment, and everyone split the expense equally?

But I guess they don't do that, huh?

6 The FIA does actually charter multiple  cargo 747s to move the cars and much (all?) of the air freight.  Getting their personnel to the destinations is on the teams, however.  Some drivers make their own arrangements (in his championship season, Jenson Button flew business class on his own dime), some have their own planes, some fly with the rest of the team.