Michael Schumacher In Bad Shape Sad and troubling news from the world of Formula 1 today as recently-retired and seven-time world champion Michael Schumacher is currently in a medically-induced coma and is "fighting for his life."

Schumacher was skiing off-trail in the French Alps with his teenage son when he went down and slammed his head into a rock.  He was taken to a local hospital where initial reports were that he had suffered a concussion.  Doctors recognized something more serious than that, as he could not respond to questions and his limbs moved involuntarily.  He was quickly sent to University Hospital in Grenoble.  Once there, his condition quickly deteriorated, and surgery was required to lower intercranial pressures.  Postoperative scans showed that he had "bilateral diffuse hemorrhagic lesions" on the brain.

He was put into a medical coma to make recovery easier, as well as being kept in a cooled state.  His medical staff has publicly said that they have no idea "what the outcome will be yet.  All we can do is wait."  His family is at his bedside, and he's being monitored closely.  The frightening thought is that brain injuries often get worse after hours or days; the case of Natasha Richardson is a chilling example.

Unsurprisingly, the F1 world and beyond is rallying to his support.  Former President Bill Clinton, with whom Schumacher has worked on The Clinton Foundation, chimed in with good wishes, as have pretty much the entire F1 grid, most if not all the teams, ex-drivers... you name it, they've probably said something.  I think the best one that I've seen has to have been the one from Sauber, for whom he raced sportscars in 1991: 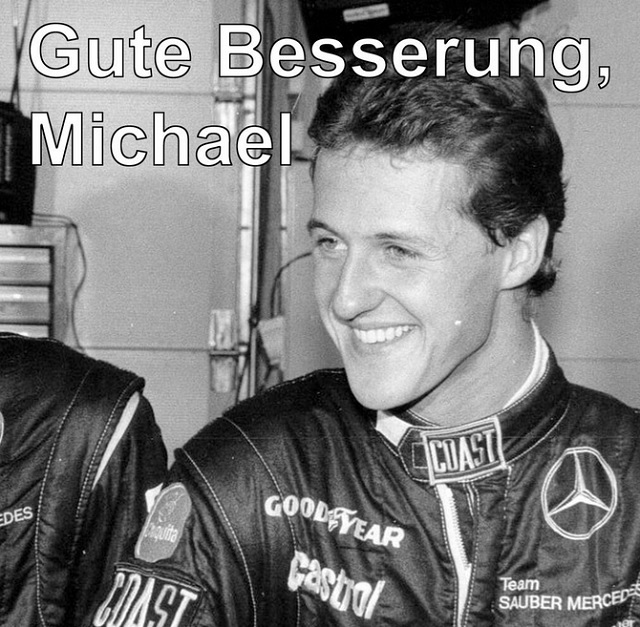 Hard to argue with that.  It's no secret that Schumacher wasn't F1U!'s favorite driver, but today, we'll call him "Slappy" affectionately: Good luck, Slappy, we're all pulling you.

1 Hoping he pulls through.

Some people: CNN says that a reporter disguised himself as a priest and tried to sneak into his room.