Jules Bianchi Update As of around 6am Pond Central Time, the reports on Marussia driver Jules Bianchi are... mixed.  The FIA confirmed that he suffered a serious head injury from the accident.  What happened is that Adrian Sutil aquaplaned off in the Dunlop Curve and went into the tire barrier.  Waved double-yellow flags, indicating that drivers must reduce speed significantly, were deployed as a vehicle resembling a front-end loader came out to carry Sutil's Sauber off-track.  One lap later, Bianchi aquaplaned off in the exact same place of the circuit, hit a curb, flew over most of the gravel runoff, and slid into and under the front-end loader.  This was all witnessed and confirmed by Sutil, who was still on site and saw the entire thing.

There was no on-screen footage of the accident shown.  The first inkling that there was any problem was when the Safety Car was called out.  What the Legendary Announce Team (as did SKY and BBC's teams) missed was that as the Safety Car pulled out, it was closely followed, and rapidly passed by, the Medical Car.  Bianchi's car was seriously damaged, showing a lot of deformity around the cockpit; a few inches worth of the airbox/roll hoop behind the driver's head were missing.  It's unsure if it was removed by the extraction team or by the impact.  Either way, the left-side sidepod was crushed, and Bianchi suffered exactly the type of accident we've all feared... one that apparently defeated the crash structure of the car.  For those who might want to see the situation, I have included a photo behind the SPOILER tag.  There is no gore, but it is still somewhat disturbing.  Your call. 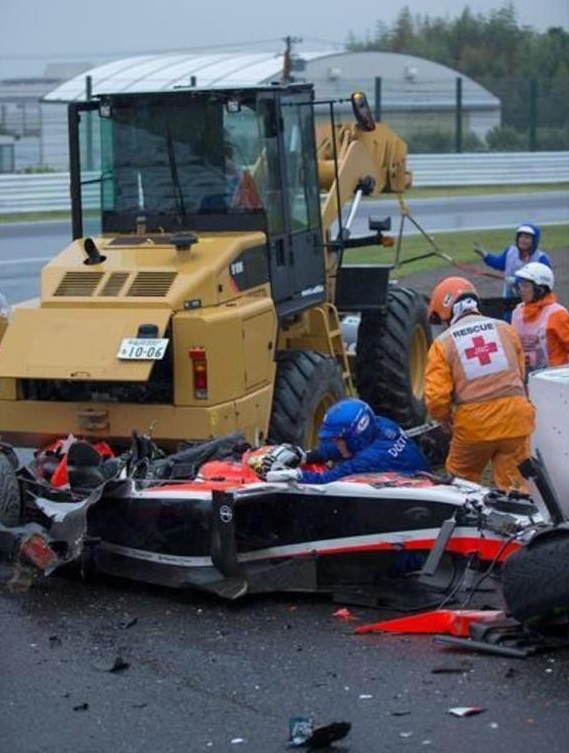 Bianchi was taken to the Suzuka medical center, then to Mie General Hospital via ambulance.  While the usual routine is to use the medical helicopter, it appears that the size of the ambulance, allowing more medical personnel to attend to the stricken driver, caused the change in procedure.  Once at the hospital, a CT scan showed the extent of the severe head injury and surgery took place immediately.  As of roughly 12noon Sunday, Pond Central Time, Bianchi is out of surgery and taken to ICU, where he is reportedly breathing on his own (note: there are now reports saying that he is intubated).  Some of the drivers were at the hospital waiting for news.

The F1U! crew asks our readers to send happy thoughts in the direction of Japan today.  It may not do any good, but it won't hurt either.

1 Happy thoughts are being sent, indeed.

So. From the looks of things (as I catch up on my Sunday backlog)... proceeding with the race in the face of the weather was a bad idea, or a horrible idea?

2 Reminds me about Maria Villarosa's accident where she submarined under a truck's loading gate.

3 Pete, I didn't want to make comparisons between Bianchi and Maria de Villota's accidents, since there are major differences between the two despite superficial similarities.

The biggest is that de Villota's was 100% driver error, and Bianchi's was not.

Even if they both drove for Marussia.

GD, the rain wasn't particularly bad for most of the race.  I don't even know if it was that heavy when the accident occurred... it needed full wets, but...