Ferrari International Assistance... CONFIRMED! Over the years, many F1 fans have accused the FIA of being members of the Ferrari tifosi.  Many times, the Scuderia has gotten away scot-free with things that other teams would be slammed for... and yet, there have been those who've partaken of the Red Kool-Aid who have looked the other way, blatantly ignoring the double-standards.

Luca di Montezemelo, Ferrari supremo, recently suggested that it's time for Darth Ecclestone to step down from his position in F1.  In an interview with the Times of London, Ecclestone replied in a fairly incendiary way:

"The only thing he has not mentioned is the extra money Ferrari get above all the other teams and all the extra things Ferrari have had for years - the 'general help' they are considered to have had in Formula One.  Ferrari get so much more money than everyone else. They know exactly what they get, they are not that stupid, although they are not that bright, either. They get about $80 million more. When they win the Constructors' Championship, which they did this year, they got $80 million more than if McLaren had won it. They were the only team that broke ranks with the other manufacturers (in 2003, during a teams revolt involving a plan for a breakaway series- Wonderduck)- why did they break ranks?  That's where the $80 million comes in. We 'bought' Ferrari. We 'bought' Ferrari's loyalty. Our deal with Ferrari was that we 'bought' them so they would not go to the others."

Ignore that, Ferrari loyalists.  Yes, your team is the most popular.  Granted.  Your team has also been helped by the powers-that-be for YEARS.  That's like Major League Baseball having different rules for the Yankees than for everyone else.

I didn't much like Ferrari before this.  I can now honestly state that I loathe them.  It's been obvious to any fan with a working brain that Ferrari has been given breaks; now it'll be obvious to even the most hardcore tifosi that the playing field isn't level, and hasn't been for years.

Anybody think McLaren might think about a lawsuit or two now?

Verrrrry interesting.  Do you suppose Luca diWatsizname could really make Eccelstone step down?

McLaren would seem to have plenty of ammunition for a lawsuit.  Wish they'd put it on Court TV. 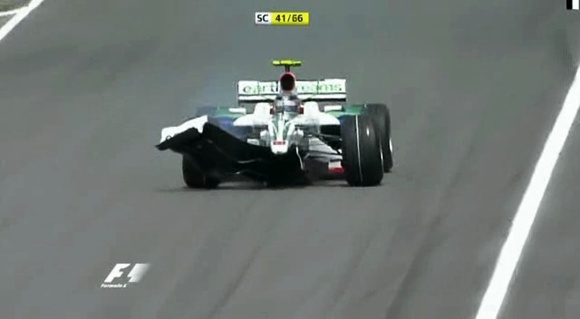 Bombshell news today, as Honda announced their decision to pull out of Formula 1, effective immediately.

"Honda Motor Co. has come to the conclusion that we will withdraw from all Formula One activities, making 2008 the last season for participation," said Takeo Fukui, president of Honda Motors.  He cited the costs of the sport, lousy car sales, and the global economy as reasons.

Honda supplied engines to BAR from 2000 to 2005, then took the team over in 2006, but has had a long history in the sport to boot, originally joining F1 in the mid 1960s.  Earlier this season, they withdrew funding from their junior team, SuperAguri, citing rising costs.  This led to SuperAguri closing up shop.

Honda will spend the month trying to sell the team, but considering the state of the global economy, it seems unlikely that there'll be much interest.  If nobody steps forward, they'll start laying off staff and (presumably) auctioning off stuff.

Of course, this leaves Jensen Button and Rubens Barrichello without drives for 2009.   I know I'm curious as to what sort of interest they'll generate; neither has burned up the track as of late, but that's certainly due to the miserable Honda chassis.  Remember, Button won the 2006 Hungarian GP (albeit in the wet, with breakdowns from both HWMNBN and Slappy Schumacher), and Barrichello outdrove Button in 2008, earning 11 points to Button's 3.  There still are a few seats out available out there, and I'll guess that one of the two will get a drive.  And then there's Ross Brawn, team principal and architect of Ferrari's dominance in the first half of this decade; where will HE end up?

I've been hard on both the team and the drivers over the past few years, but I didn't want them to leave the sport.  Like Toyota, they spent too much money for (practically) no results.  They could have dominated F1 if they used their cash well.  The 2007 windtunnel debacle, though, is a perfect example of why they were so unsuccessful (short version: at the beginning of the season, they didn't calibrate their wind-tunnel correctly.  All their aerodynamic data was wrong, and as a result, every fix they put on the car just made things worse).

Nine teams, 18 cars will take to the grid in Australia.  That'll be VERY strange...

It was bound to happen, though, when you look at the number of sponsors that have already left NASCAR.  Hard to justify spending millions of dollars on sports in this economy.

2 It's a pity, but in the current economic climate it's not to surprising that someone dropped out. Probably won't be the last, either.

This guy thinks that Honda is walking away because they're tired of losing. So he doesn't think this presages a collapse of the sport.

4 While that guy comes off as a supercilious twit of the first class, he may not be wrong.  All I know is that one win in three years as a constructor, at somewhere between 200 and 300 million dollars/year, plus six years as team partner and financier (zero wins, who knows how many dollars?), when your car sales have dropped 40% in the last quarter, seems like a pretty big financial hit that a company doesn't have to take.

*shrug*  They wrote off SuperAguri to save money, after all...