F1 Quals: Monaco 2018 Another beautiful day in the Principality, all sun and blue skies and yachts in the harbor.  And a bunch of loud F1 cars driving through the streets.  Here's the provisional grid for the 2018 Monaco Grand Prix:


You may notice that there's only 19 cars shown, instead of 20.  DH Verstappen did it again, wrecking in Practice 3, breaking his front suspension and damaging his gearbox in the process.  Red Bull could not get his car repaired in time for Quals, and so he'll start at the Steward's discretion.
Which has got to be a blow to the team, because his partner in crime, Smiley Ricciardo, turned in the fastest lap ever around Monaco to take pole.  I'd like to point out that ten years ago Felipe Massa's pole speed was 1:15.787.  Even the slowest qualifier this year was almost 2.5 seconds faster than that.  Anyway, Red Bull had owned the race weekend, finishing 1-2 in every session thus far, and were expected to do so in quals.  No such luck.  I'm beginning to wonder if what we're seeing nowadays is what DH Verstappen is... crash-happy and quick to blame others.
Much can happen between now and the end of the race, but it sure is lookin' good for Ricciardo.  F1U! will follow along sometime afterwards... got the Indy 500 to look at too!  See ya.

F1 on The ESPNs: Monaco 2018 Monaco.
To your common American, the word conjures up images of impeccably tailored men gambling away fortunes in the Casino while impossibly beautiful women try to catch their eye.  International spies lurk in every corner, camouflaged by supercars idling in the French Riviera night.
To your common Formula 1 fan, it means "oh god I hope it rains."  There would be no way the sport would be racing on the streets of Monaco if the race was proposed today.  Too narrow, too unsafe, too small.  But yet, every year, here we are:

And we as fans love it.  It's the counter-American type of racing.  Here, we go for monster high-banked ovals or 500 mile long races.  Last year, the two worlds came together when Fernando Alonso and McLaren took a run at the Indianapolis 500, and former F1 driver Takuma Sato won the race.
No such luck this year... Alonso will be driving at LeMans, for example... but it really is the greatest day for auto racing in the year, Sunday is.  Monaco, Indy, then Charlotte for the Coca-Cola 600.  But it all starts at the tiny little constitutional monarchy with a nice harbor.
ESPN has done us good this time 'round... here's the schedule
Thursday
Practice 1: 4a - 530a, live on ESPN2
Practice 2: 8a - 930a, live on ESPN2
Friday
...is traditionally an off day so the rich people can get out of town before the noise arrives.
Saturday
Practice 3: 5a - 630a, live  on ESPNews (be careful here... there are conflicting reports)
Quals: 8a - 930a, live on ESPN2
Sunday
2018 Grand Prix of Monaco: 8a - 11a, live on ESPN, the real deal.  There's also a replay on ABC in the afternoon.
So there's your weekend!  Get comfy, order a deep-dish pizza, and enjoy the racing!  F1Update! will be along afterwards... I promise.

1 Order a deep dish pizza...undoubtedly easier to do in Duckford, not far from where the delicacy was invented, than most other places, but we do have a couple of Pizzeria Uno chain restaurants* within reasonable driving distance, and I haven't had one in a while.  That, sir, is a pretty capital idea to include in my Memorial Day weekend festivities, like maybe having one at Uno while catching the replay of the race.  Cheers.


*I fully accept that pizza at my local Uno franchise "just isn't the same as in Chicago", just as NY pizza outside the NY area isn't the same, as well as cheese steaks outside Philadelphia.**  It's still a pretty darn tasty meal, and I'm looking forward to it.


**NY pizza and Philly cheese steaks not being as good elsewhere I can vouch for.  I grew up in NJ about halfway between the two cities.

2 Oh yeah, about F1Update!  Good to hear!  I hope this means you're feeling better, and things will do nothing but continue to improve for you.  Reading the F1Update!s is, no joke, what got me interested in the sport, and are still a delight to read.  Thank you WD.

Until Further Notice Due to ongoing joint problems vis a vis my hip, I'm really unable to spend enough time in front of my computer at home to do writeups.  I'm working on that, of course, but right now it just hurts too much to spend the two hours or so it takes.

A doctor's appointment is a week from friday... it would have been sooner, but he's on vacation... so hopefully that'll shake something loose.

Of course, if something big occurs, I'll show up to pontificate... I'm still a fan, after all.  Oh, and Spain was a Lewis Hamilton Special... he ran away and hid for the entire race.  Never any doubt in my mind, that's for sure.

F1 Quals: Spain 2018 A threat of rain hung over the circuit as the clock began its countdown on "GoFast Day" at Barcalounger.  It never came, but the qualifying result was interesting nevertheless... here's the provisional grid for the 2018 Grand Prix of Spain:


You'll note only 19 cars listed.  The 20th, Brendan Hartley's Toro Rosso, had a unfortunate vehicle/barrier interface right at the end of Practice 3 and the team could not get the car back together in time for Quals. 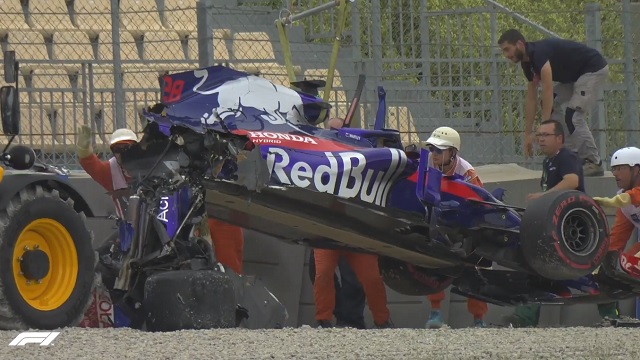 To be fair, the rear of the car was still attached until the workers picked it up.  THEN it fell off.
I'm not entirely sure how the two Mercs ended up on the front row, since at no time during the practice sessions or the other two Qualy periods did they look faster than the Ferraris.  Well, that and my DVR timed out with two minutes left in the session.  Apparently ESPN does not designate Formula 1 as "sports", thus not activating the automatic "extra hour" mode on my DVR.  Anyway, I've not seen the final runs of Q3 because of that.  I'm not gonna go out of my way to find 'em, either.  I'm grumpy that way.
So, an interesting grid for Sunday's race... let's see how it goes!

F1 on ESPN2: Spain 2018 Finally, the Thundering Herd makes its way back to Europe and the real start of the F1 season.  This is when the teams begin to debut new parts, new wings, etc etc etc, so in theory we could have completely different results from the flyaway races.
Don't count on it, though.  Here's the track map for the 2018 Grand Prix of Spain.

That's just the way it is, somethings will never change.  Spain. Spain never changes.  Though they did resurface the track since last year so grip issues will be a possibility.  Or not.  It's hard to tell with these new cars.
We'll find out though... starting Saturday!
Saturday
Practice 3:  5a - 630a  live on ESPN2
Quals: 8a - 930a  live on ESPN2
Sunday
2018 Grand Prix of Spain: 730a - 10a  live on ESPN 2
Hopefully I'll have coverage afterwards.  See ya then!