Newest McLaren Tooned! 50 I wasn't wanting to post this right now, but repeated attempts to link it in comments has kinda forced my hand... wing... whatever.

1 Tooned is one of my favorite parts of this whole thing.  And I never would have found out about it if not for you.

Also, I loved all the background bits of slightly off brand names, like "Casdrool."

F1 Quals: Belgium 2013 The result is the same, but the gettin' there made it fun!  Here's the provisional grid for the 2013 Grand Prix of Belgium:


Just as Q3 began, with nine cars on dry tires lined up at the Pit out light, it began to rain.  The nine cars immediately leaped onto the track and tried to get around and complete a hot lap before the track became too wet for dry tires.  They didn't succeed.  It took them until roughly halfway around the four-mile-long circuit to realize it, but there was no way a flying lap on slicks was going to work.  Quickly, the situation became one of pure survival as nine cars slipped, slid, fishtailed and twitched their way back to the pitlane.

Then there was Force India's Paul di Resta... the 10th car in Q3.  He and FI waited for everybody else to start rolling out of the pitlane before they came out... on Inters.  It was a gamble to be sure.  If the track had stayed dry-ish, everybody else would set flying laps in much better conditions than he'd ever see.  But if the rain kept coming, he'd be on Inters at the best possible time: that golden period where Inters were superior to slicks, but before the rain tires started to slow down a touch.

And that's exactly what happened.  For nine minutes and 55 seconds of the 10 minute session, Paul di Resta sat on provisional pole.  But the rain had stopped a couple of minutes earlier, and Nico Rosberg had managed somehow to pip di Resta just as time expired for the session.  Disappointing, but it would still be a front-row start for Force India, nothing to sneeze at for a midpack team.

Except both Red Bulls and Shiv Hamilton had begun hot laps just before time ran out on Q3... and the track was drier still for them.  Webber was in front of Vettel who was, in turn, in front of Hamilton on track.  First Webber beat Rosberg's time for pole, then Vettel beat Webber's time... and then Hamilton took pole from Vettel.  Suddenly, the great gamble taken by Force India and Paul di Resta, which looked like such a winner, was gone in an instant.  But for a brief shining moment, Force India controlled the Formula 1 world.

There's more rain predicted for Sunday's race, which means that anything could happen.  If you're gonna watch one race this year, make it this one.  It should be awesome... see ya then!

F1 On NBCSN: Belgium 2013 In the Walloon Region of Belgium, tucked away in a valley in the corner of the Ardennes Forest, there is a small village that has lent its name to a form of beauty salon, personal care resorts, or places devoted to overall well-being through a variety of professional services that encourage the renewal of mind, body and spirit.  That little town is also known for a very, very big racetrack.  Of course, I speak of Spa, home of the Grand Prix of Belgium, which also encourages renewal of the mind, body and spirit through the heavy use of high RPMs and carbon fiber.  Let's take a look at this most favorite of circuits, shall we? 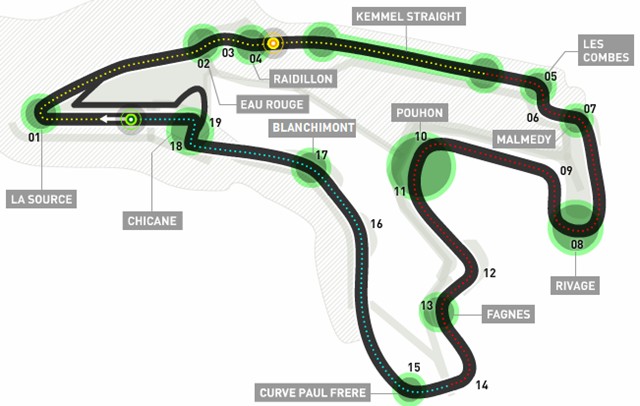 Yup, still the same old Spa of the past years.  I could gush over the wonder that is Eau Rouge, the daring that is Blanchimont, the glory of La Source, and in my older "F1 on SPEED!" posts, I have.  Instead of regurgitating all the same things, I'm going to pause for a moment and pay tribute to the people that taught me how to be a fan of F1, then motorsports in general.

SPEED was where my adult fandom of Formula 1 began, back these... eight or nine years ago.  They showed me the nuance and detail involved in a way that only baseball before it has hooked me.  From F1, it was a small step to the two 24 Hours races they programmed, at Daytona and LeMans.  From there, I learned about the brilliant V8Supercars series with the magnificent Mt Panorama circuit.  Then onto the world of high-end car auctions, lesser Formula races, and even the NASCAR Truck Racing series, all of these were introduced to me via the Charlotte, NC-based channel.  And while they never turned me into a fan of NASCAR, they sure gave it a good try.

SPEED is gone now, turned into something called "Fox Sports 1", but for me, they'll always be a part of my motorsports fandom.  Thanks, guys.  You'll be missed.

You'll note that Quals is out of normal time; that's because NBCSN believes that something called "Premiere League Football" is more important.  I had no idea Adobe was sponsoring football teams!

1 The crazy thing is that NBC has decided to air EVERY Premiere League game through their various networks. This means they're airing a lot less cycling!

P34 @ Monaco I hope to have the third installment of Eva 1.11 tonight, but while you're waiting, here's this:

A lap of Monaco in the legendary Tyrrell P34 with most of the bodywork taken off.  Helluva thing, those four front wheels.  And here's what it looks like with the bodywork ON:

1 Watching that first video, the overwhelming thing I felt was how VULNERABLE he seemed without the bodywork.  It was scary seeing him come close to the walls and barriers.

I guess the cost/benefit ratio of the technology wasn't good enough for it to catch on.  Or else F1 decided it was unfair and made a rule against it.

3 Also, about vulnerability: the body work doesn't offer any substantial protection. It's all about streamlining.

4 Mauser, it's strange, but the biggest problem with the long-term viability of the P34-type design had nothing to do with the chassis itself.  Oh, to be sure, the FIA changed the rules to state that a F1 car can only have four wheels, and that put an end to that, but that took six years to occur, in 1983!

No, what killed the P34 as a racer were the tires.  Goodyear had to make each set of 10" front tires by hand specifically for Tyrrell only.  Of course, every other car on the grid could use conventional-sized front tires, so that process was much easier.  Goodyear didn't develop the tire design at all, which meant that in 1977, the P34's second year of racing, it wasn't nearly as good as it had been the previous season, when it had 10 podiums and one race victory between the two cars (17 race season, but it didn't compete in the first three races).

In fact, in the race it won (Sweden, 1976), the P34 finished 1-2.  The following year, there were four podiums total, no wins, and the car was in all 17 races.  It also became fragile, though F1 cars notoriously were in that time.

5 I imagine a thin layer of fiberglass isn't all that much protection, but riding around without it just took away the illusion of protection.

I recall a few Road and Track type magazine articles about other 6-wheeled cars, with the other two up front.  But the car I'm thinking of seemed to have them just to support the load of an enormous engine.

6 Mauser, would that have been the Covini C6W?  Because, strangely enough, all the other F1 cars that had six wheels had four wheels at the rear: the Williams FW08b was the one that caused the FIA to finally create the 4-wheel rule; the March 2-4-0 was a four-wheel-drive car... with all four powered wheels at the back; even Ferrari tried something with the 312 T6, with four wheels on the rear axle...

7 Hmmm, no, this was much longer ago, and more sedan-like.  Fortunately, the commenters on another article on that site led me to the "Panther 6" which might be it.