Disaster At Daytona On the final lap of today's NASCAR Nationwide series race at the Daytona Superspeedway, there was a terrible wreck.  Kyle Larson, in the middle of the pack coming out of Turn 4 and heading for the tri-oval/start-finish line, got tipped sideways and as often happens at any superspeedway race, The Big One happened.  There were cars going every which way, but Larson went nose-first into the wall, snapped over, and got airborne.  HIGH. 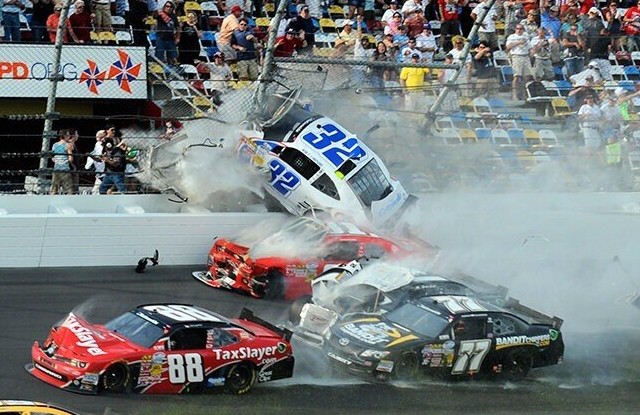 The entire front of his car, back to the firewall, was torn off as he pinwheeled over the SAFER barrier and into the catch fence.  The catch fence did its job: it kept the #32 out of the stands.  Mostly. 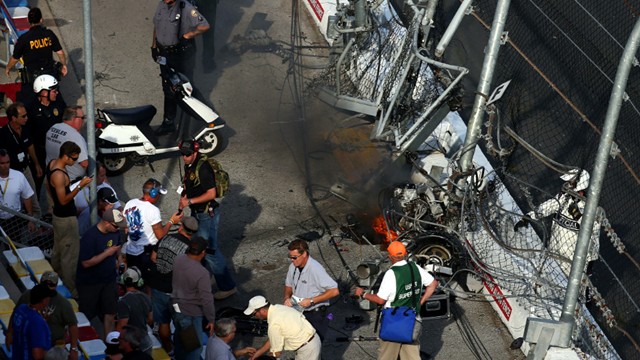 You may notice the man with the orange hat.  Directly above him in that picture is the engine of the #32; the fire you might notice is from fluids draining from it.  Unfortunately, that's not the only thing that got through the fence, and what got through was worse than an engine. 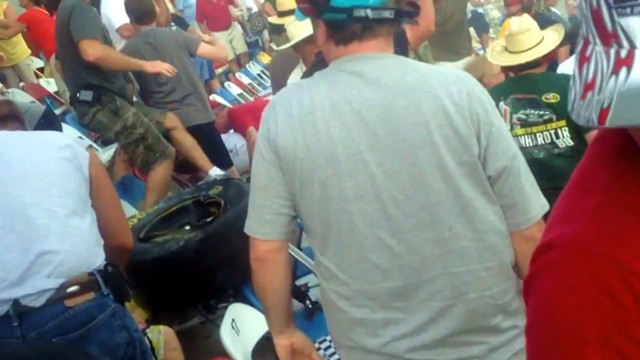 At least one 120lb tire/wheel/brake rotor combinaton made it into the stands, working its way through the spectators until it came to a halt some 15-20 rows up.  Around thirty people are known to have been injured.  15 were taken to the track's medical facility for minor cuts and bruises and were released.  Conflicting reports say 14 to 16 were taken to two hospitals near the track.  At least one was reported to have a serious head injury and was in emergency surgery.  Having said that, NASCAR officials just had a press conference, and they said that everybody at the hospitals were in "stable" condition, so take that emergency surgery report with a grain of salt. 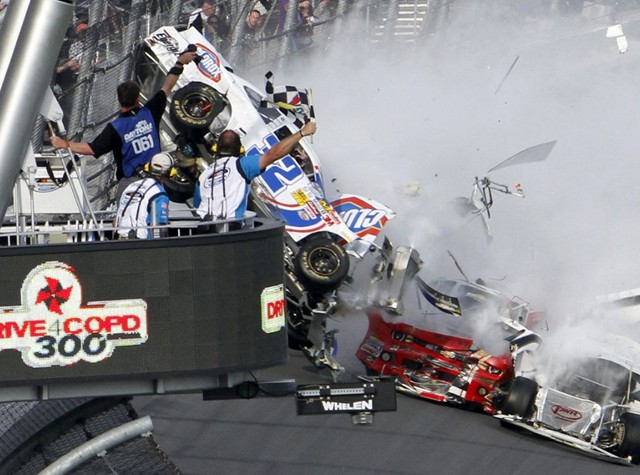 Racers know that what they do is dangerous.  They understand that every time they climb into their car, be it NASCAR, F1, IndyCar, dragsters, LeMans or motorcycles, they could be injured or killed.  But no fan expects to see a tire flying at their face, and it's troubling every time a fan is hurt.

With luck, everybody injured will be okay.  Ironically, the drivers involved are all just fine.  As of right now, Sunday's Daytona 500 will go on as planned, with Danica Patrick on pole.

1 The winner of the race did the right thing too.  They basically skipped any sort of post race celebration/interviews/antics and just focused on getting people care.

2 Maybe it's too early to be this cynical, but somehow I DON'T expect there will be calls to Ban NASCAR racing after this.  Unlike how they tried to end the Reno Air Races after their darkest hour.

3 Looks like there weren't any deaths, and that's damned lucky. This is no LeMans...

A Thousand Words? If you think about Formula 1 history, 1994 is pretty much considered the grimmest year ever.  That's because of that horrible weekend at Imola which saw the death of Roland Ratzenberger and Ayrton Senna, and the near-fatal wreck of then-rookie Rubens Barrichello.  What often goes uncommented upon in that year was the incredibly fortunate escape of the Benneton team at the Grand Prix of Germany.

1994 saw the reintroduction of refueling, banned since 1983 from the sport.  Even before the season began, teams were concerned about the pressurized fuel rigs to be used.  The rigs could fill an empty tank in just a matter of seconds, but everybody was concerned about the consequences of a spill or malfunction.  Through the first eight races, there had been no incidents, and perhaps the teams were feeling a little more comfortable now.  On lap 15 of the German Grand Prix, Benneton's Jos Verstappen brought his B194 in for a regular pit stop: tires and fuel.  Unbeknownst to the FIA, the team had tinkered with their refueling rig, removing a fuel filter and in the process upping the flow by an additional 10%.  Everything seemed to be going fine, until the man on the hose moved it around slightly.  The nozzle seemed to pop out of the fuel tank, spraying an estimated four liters of gasoline around the car in an instant.  It took no time at all for the inevitable to occur.

Just as quickly as it happened, it was over.  While a few of the mechanics went to the hospital, nobody was seriously injured; Verstappen, caught in the middle of the whole thing, suffered a burn to his nose when some fire got into his slightly-opened visor.  Steve Matchett, one of the voices of SPEED's Legendary Announce Team, was the rear jack man for Benneton at the time.  His burning firesuit was extinguished by members of the McLaren team, and he suffered no injuries.  The fire did give us one of the truly outstanding photographs, not just of F1 or motorsports, but perhaps of all photography. 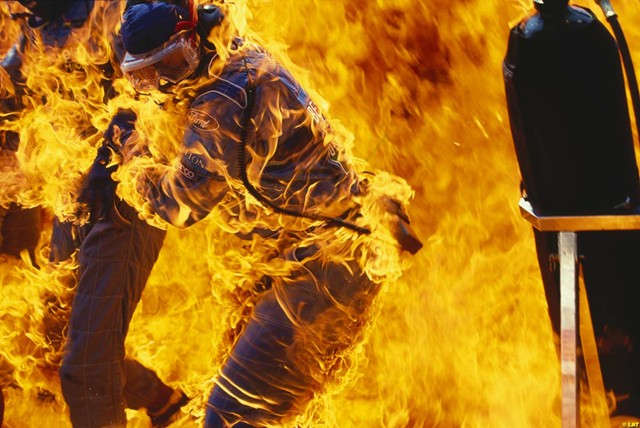 1994 was a terrible year for Formula 1, but it could have been so much worse.

1 It's neat (understandable but neat) how people from other teams all swarmed in to help. That's how it should be.

2 Whenever I see a picture like that last one, I always hope the people are holding their breath. If someone inhaled in a situation like that they'd get a lung full of flames, and then they're either dead or hopelessly crippled for life because of lung damage.

3 Just remember: nobody seriously injured.  Just keep repeating that when you're looking at that picture.  For the record, the man's name is Paul Seaby, and he's now the Team Manager for Lotus F1.

4 I seem to recall a similar incident in  Indy car racing.  The next generation of nozzles included improved interlocks, and the ring handle also had water jets that would hose off any spilled fuel as it was pumped.

Still, I hope the guy who modified the nozzle was... fired.

5 Nope.  This is F1, and the team principal was Flavio Briatore.  He undoubtedly gave him a commendation.  After all, Benneton was suspected of having secret (and illegal) launch and traction control software on Michael Schumacher's car that year, too.

The Moment Taki Inoue Became Famous Taki Inoue was, to put it bluntly, not a good F1 driver.  In 1995, he drove for the hysterically bad Footwork team (note: they had a podium that year... in the Australian Grand Prix; only eight cars finished that race, all but the winner at least two laps down.  That's a podium that only just barely counts), but only because he had very very deep pockets behind him.  While that was enough to earn him a seat, it didn't mean that he could do anything with it.  He drove a F1 car like you or I would: badly.  Very badly.  In 17 races that year, he retired from 12 of them; his best finish was 8th at Monza, when only 10 cars finished.

In short, he was kinda embarrassing to the sport, but because he wasn't out-and-out dangerous to himself or others on the track, the FIA couldn't kick him out.  That should have been all, a blip in the ether, Inoue in, Inoue out, g'bye.  But two weird things happened to him.  First, during the first Qualifying session at Monaco, he was sitting in his dead car being towed back to the pits, when the safety car ran into him.  The Footwork was pushed into the barriers and flipped over.  Inoue had a concussion and a chunk taken out of his helmet, but he still raced the next day: a gearbox failure ended his Monaco GP.

While that's curious, the moment that Taki Inoue became famous came at the Hungarian Grand Prix.  On Lap 14, his engine when kablammo and the Japanese driver brought his car to the side of the track, where it sat, steaming and unhappy.  The track marshals were less than enthusiastic in their efforts to help him; after gesturing furiously, he ran to the armco and grabbed a fire extinguisher himself.  He turned around, took a couple of strides towards his car, and... 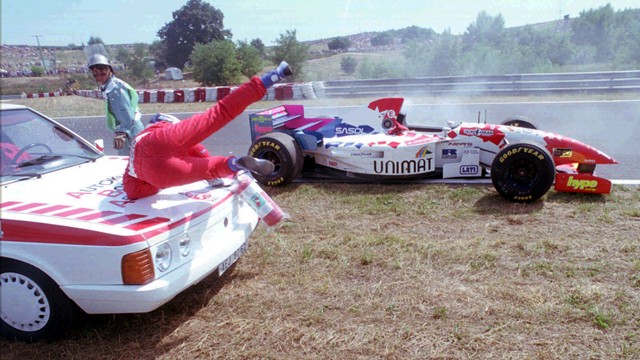 ...he was run over by the medical car.  And thus, a legend was born.  Here's the video.

Today, Inoue is considered something of the Clown Prince of F1, via his twitter account.  He knows what he was, and has fully embraced it.  Good show, Mr Inoue!

1 He limped a few steps and then fell down. Was he badly hurt?

He had a broken left leg.  It didn't slow him down, though... two weeks later, he finished 12th at Spa-Francopants.

It didn't slow him down, though...

Sounds like he didn't need any help slowing down...

4 So he raced at Monaco with a concussion, and he raced at Spa with a broken leg--both in the same season, no less.  He may have mediocre racing skills, but he's also got guts.

5 "Mediocre" may be too kind, but I don't think anybody would disagree with the latter comment.  Maybe not that many brains, but guts, yes.

This Is Simple! So you wanna be a F1 driver, bunky?  You think you got the skills to take one of the 22 most technical cars in the world out onto the racetrack and go head-to-head with the likes of Seb Vettel, Mark Webber, HWMNBN, Shiv Hamilton and all the others?  Okay!  Here's your steering wheel.

...and here Hamilton thought he had gotten away from Button(s).

Hey, where you going?  I thought you wanted to be a F1 driver!  You've only got to be able to negotiate tracks like Spa, Austin, Montreal and Monaco at nearly 200mph, with other cars mere inches away, while being able to operate your steering wheel, often without looking.  Here's the kicker: this is Shiv Hamilton's wheel, after he asked Mercedes to simplify it for him.

1 Huh. I would not have expected carpal tunnel to be a major hazard of F-1 racing.
You learn something new everyday.

2 Around 1997 in a Honolulu store I saw a steering wheel that Ayrton Senna had in one of his F-1 cars, there might have been six buttons and a dial on it.  If I can remember correctly the price was somewhere around 5k.

3 Is that a "drink" button there on the left?

Personally, I'm holding out for an automatic.

4 I like the purple dial with four different "default" settings.

6 These "simiplified" controls do not seem more complex than those I have in Piper Arrow, but there's a significant difference in that airplane controls have more to do with navigation and communication than with airplane's performance.

The "drink" button triggers a pump that delivers the Gatorade. You don't want to strain yourself sucking from a remote bottle through the 6-ft-long straw.

Pete, I have no doubt.  The question is, do you fiddle with the Piper's gizmoswitches while undergoing 5g manuevers a handful of times every 90 seconds, in close formation with other planes, at around 180mph?

8 Arrow cannot reach the numbers. Maximum sustained speed against the air is 155 mph and the maximum rated load is 4.4g. I hit 200mph against the ground once with a good tailwind, even have a picture of GPS.

The fastest and toughest airplane I have ever flown is North American T-6 "Texan". It tops well in excess of 200 mph, in fact I was going faster through Valles Caldera. It can pull 5g easily and actually it takes a certain attention not to black out accidentially.

But without doubt proximity operations are the hallmark of F1. They are made easier by the advanced safety that F1 racers enjoy these days, but back in the day Fangio was doing 75% as fast WITHOUT A SEATBELT.

9 My steering wheel has three buttons on it that control the radio/cd player.  I still use the ones on the dashboard because I can operate them without taking my eyes off the road.  That being said, I would love for a chance to drive an F1 car into the kitty litter or a wall.  (Assuming I could even get out of the pit lane.)