While We're Waiting For F1U... People have asked me, "Wonderduck, why do you like LeMans so much?" 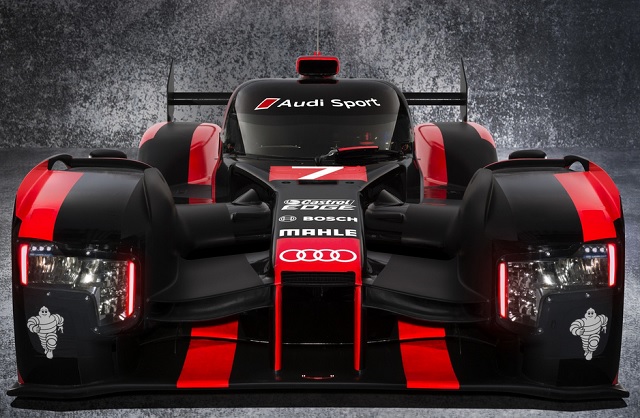 THAT right there.  That's why. 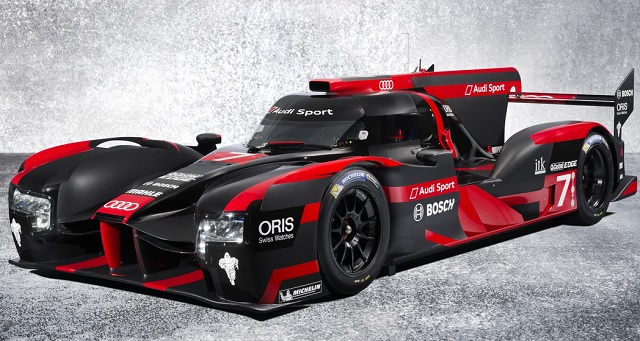 That's Audi's entry into the 2016 World Endurance Championship's LMP1 class (or whatever the top prototype class is called these days).  My word, that's quite the looker.  I mean, I love F1 cars, but c'mon, they haven't looked this good in years.  And that livery!  That's poster material right there.

I kinda geeked when I first saw the pictures.

1 That is QUITE the looker, isn't it? Wowza.

2 Pretty!  Do they plan to pull it off track at random intervals to check for continued rules compliance?

3 David, what is it that you think they might find?

5 The livery is great, except for Bib on each front fender. It looks like he's running in a desperate attempt to keep from being run over.

F1 Quals: Abu Dhabi 2015 Here's the provisional grid for the 2015 Grand Prix of Abu Dhabi.  Stop me if you've heard this one before:

Yup, it's another Mercedes 1-2, with Rosberg taking his sixth pole in a row.  The big news, though, is that Ferrari's Seb Vettel never made it out of Q1.  The team told him that he had gone fast enough to make it to Q2, so he backed out of his final flying lap to preserve tires... and then Jenson Button's McLaren bumped him.  Oy.

Up at the front, Lewis Hamilton actually was quickest in Q1 and Q2; Rosberg just killed it in Q3, though, and that's the only one that really matters.  There's actually a chance that the nearly .40 sec gap will increase, as Hamilton may have his fastest lap thrown out for violating track limits.  He'd still be in 2nd, though.

Other than all that, however, it was pretty much bog-standard.  Which is what I expect Sunday's race to be as well.  But who knows?  Maybe it'll rain.

1 Force India in 4th is a bit of a surprise.

2 How is it Hamilton had a faster time in Q1 and Q2 but is still second?  Or is that just because you only use one table for all three rounds?

3 Rick, the table's organized by final qualifying positions. Exactly what position you finish in, for Q1 and Q2, is unimportant if you aren't low enough to get knocked out.

4 Steven, if Ferrari hadn't peed Vettel's Q1 down the collective legs of their firesuits, Perez would likely be a more palatable fifth.  The grunt of the Mercedes engines definitely dominates down those two long straights, and reportedly Force India is running a little bit more wing because of that.  It slows them down, but improves handling in the twistybits.

Rick, what Avatar said... the chart shows the final grid positions, but also shows the best time per driver per session.  It's a convenient way to do it, instead of having three separate charts.

F1 on TV: Abu Dhabi 2015 And so we come, not to the end of the beginning, nor the beginning of the end, but just, simply, the end.  The final race of the 2015 Formula 1 season.  A season which started eight months ago in Melbourne.  Along the way, we've seen one of the less-interesting seasons of racing in recent history.  So what does this finishing contest promise?  Let's take a look at the track map for the 2015 Grand Prix of Abu Dhabi. 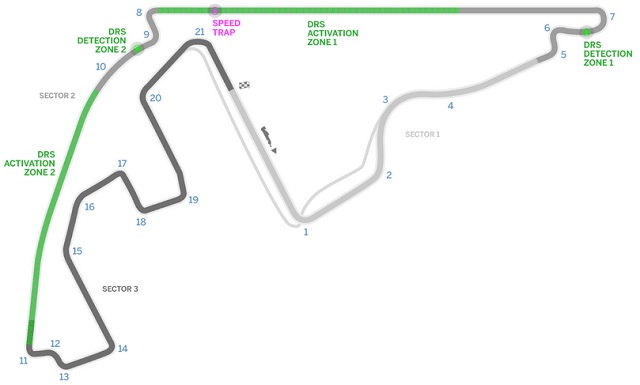 We've been here plenty of times before, and pretty much what we've learned is that this is a awful track to race on.  Fun to drive, yes, but to contest position?  There's one good place to pass, Turn 8/9, with Turns 5-7 being somewhat less swell.  Remember, this is the circuit where they thought it would be a good idea to have the pit exit run underneath the track.  I suspect it's merely luck that we haven't seen that idea backfire horribly.

So what's the point of this race?  Well, Valterri Bottas and Kimi Raikkonen in a fight for fourth place in the driver's championship, one point separating them.  Lotus leads Toro Rosso by nine points for sixth in the constructor's championship.  And... um... that's about it, really.  Most teams will probably be using Abu Dhabi as an extended test session... remember, the 2016 season is only four months away!

We'll be along afterwards, of course, with the usual F1Update!.  Join us, won't you?

1 I don't even find this track to be very fun to drive.  It's my least favorite track in every racing sim that features it.

2 Why is it that you think running the pit exit under the track is a potential disaster?

3 Steven, here's a look at the inside of the tunnel.  All it'll take is one enthusiastic driver spinning his steed to cause a blockage.  Or a broken suspension, or an unfortunately timed engine failure.  Or, god help us, a fire.

That it hasn't happened yet just means that it's going to happen eventually.

4 Steven, someone wrecked their GP2 car in the tunnel today.  It's just a matter of time...

F1 Quals: Brazil 2015 Decent weather at Interlagos today, more's the pity, but the track is still naturally slippery.  So what's the grid like for Sunday's race?  Take a look:


Not much to say about this, really.  Rosberg has taken his fifth consecutive pole, Alonso's McLaren died on track with yet another bum engine.

And the president of the FIA, Jean Todt, didn't so much step on a landmine as jump up and down on a landmine when he said to French TV station Canal+ "do you realise that the number of people killed in road accidents is by far bigger than the number of people who died in Paris yesterday?"  I understand he took the opportunity to promote the FIA's road safety program, but that was not the time.

Jean Todt is French, by the way, and the FIA's headquarters are in Paris.  Just saying.

1 Open mouth wide, jump in with both feet, after first cladding those feet with sturdy crampons. Hooboy.

2 Mercedes qualfied 1-2. What a surprise.

3 I know, I was totally shocked.

F1 on TV: Brazil 2015 The fact of the matter is that I hate Interlagos, the site of the 2015 Grand Prix of Brazil.  I always have, and though I know it's an irrational hate, I probably always will.  Even though the circuit has been upgraded to fix the ridiculous pit-in that nobody paid attention to and therefore it always looked like they were going to pile into the wall of the pit lane at 200mph, the memories remain.  Here's the track map for the place: 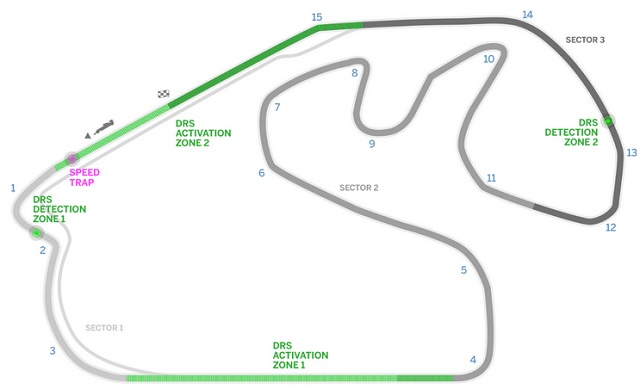 Really, I'm just about the only F1 fan out there who doesn't like Interlagos.  The drivers adore the place (except for the occasional attempt at armed robbery), the Brazilian fans (that's a lot of fans!) are both well-versed in the sport and insane, and it's uncommon to have a poor race.  Even the part that I used to hate the very most, that it was the last race of the season, has changed, with that title now in the oil-stained hands of Abu Dhabi.  So why, exactly, do I still hate Interlagos?

Because I'm a stubborn mule of a lifeform that refuses to allow such things as logic to get in the way of my peccadilloes when it comes to F1.  Enough of this place, I hope the two manmade lakes that give the place its name overflow their banks and flood the whole kit 'n' kaboodle.  Safely, of course.

Despite my loathing of the place, the Legendary Announce Team (which does not, in fact, respond to my every whim, unlikely as that seems) will be doing their usual outstanding job at coverage.  Here's the schedule for the broadcast weekend:
Friday
Practice 2: 10a - 1130a live on NBCSN
Saturday
Quals: 10a - 1130a live on CNBC
Sunday
2015 Grand Prix of Brazil: 930a - 12n on NBCSN

This actually surprises me somewhat; even though they've done four races on NBC already, for whatever reason I thought Brazil would be on the Mother Network.  Wow, look at me, I'm wrong, perhaps for the first time this post.  Anyway, that's it.  I've given enough of my attention to this... place... for one day.  Of course, I'll force myself to cover Quals and the race this weekend, so I don't get to escape completely!  See ya then!!!

F1U! Mexico Delayed Because Of Idiot After the race, I took a nap.  The race ended around 3pm, and I went to sleep around 6pm-ish.

It's almost midnight.  I only just now woke up.  I'm an idiot.