In effect, nothing happened.  Since it was wet from the get-go (though it didn't rain in Q1, the track was so wet it may as well have been raining the whole time), nobody was at a particular advantage or disadvantage.  Which is weird... usually you'd see a Ferrari (for example) out in Q1, or a Caterham making it to Q3, or what have you... but not today.  We almost saw 4Time Vettel fail to make it to Q3, but no, he cleared it at the last moment.

Lewis Hamilton's initial reaction to qualifying second was his usual whinyness, but it changed to remembering what happened last year.  Then, he was the polesitter, and had his doors blown off down the Kemmel Straight by Seb Vettel on Lap 1.  What's to say that won't happen this year?

Pay no attention to the two-second gap from the polesitter to the first non-Mercedes.  Lots of reasons are possible for that: Merc could have a wet-weather setup on their cars, for example, or they just like the wet-weather rubber.  It'll be a much smaller gap on raceday... which is Sunday!  See ya then!

F1 on TV: Belgium 2014 The Summer Break is over.  The assembled teams of Formula 1 have loaded up the transporters and taken the Circus on the road.  Drivers have come back from their vacation spots, with Switzerland being a favorite in the past.  And this high-tech road show is aimed directly at the Walloon municipality of Stavelot in the east of Belgium.  There, in the vicinity of a small town named Francorchamps, is found a seven kilometer monster, the home of the Grand Prix of Belgium.  Here's the track map: 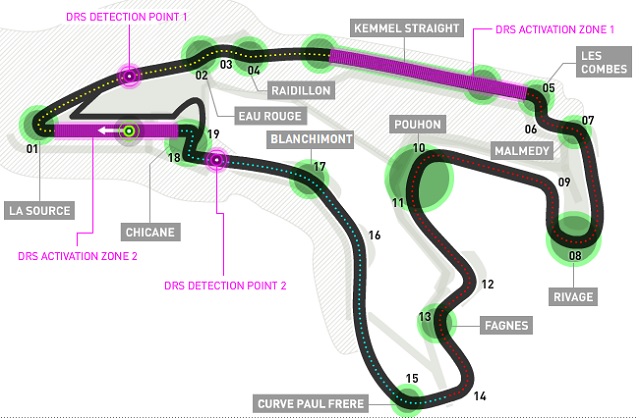 Of course, the overhead map hardly tells the whole story of Spa-Francopants.  Unlike most circuits on the calendar, Spa is all about elevation change.  From Turn 01, the track heads generally downhill until it reaches Eau Rouge.  From there to Raidillon, the circuit climbs steeply, then levels out until you reach Malmedy. From there until Blanchimont, the track descends, then climbs slightly back to the level of the start finish line.  All of which is raced at high speed; only the Bus Stop chicane could arguably called "slow."

Unless it rains.  The hoary old gag about Spa is that if it isn't raining, it's getting ready to.  There's precipitation forecast for Quals, but the race is currently supposed to be dry... but this is the Ardennes.  We've seen rain appear out of nowhere before.

Of course, the Legendary Announce Team will have their slickers and bumbershoots ready as they provide their live coverage!  Here's the broadcast schedule:
FRIDAY
7a - 830a: Practice 2 live on NBCSN
SATURDAY
7a - 830a: Quals live on CNBC
SUNDAY
630a - 9a: 2014 Grand Prix of Belgium live on NBCSN

Of course, the good sprouts of F1U! will be all over the weekend.  We'll see ya then!

1 That German dude that you hate so much didn't design this one, did he?

2 Hermann Tilke?  No, no.  This track's been around for a very long time, though its current, shorter, version came around in the '80s.  Thankfully, the Tilkemonster hasn't gotten his claws into this one.

The drivers have been away playing in Switzerland (or somewhere) but I bet the engineers and mechanics have been slaving the whole month. I wonder if anyone has figured out why the Mercedes cars are so much better than anyone else's? And figured out how to do the same to their own?

How much redesign are they legally permitted to do mid-season?

4 The engineers... actually, everybody involved on the racing side of the businesses... were literally locked out of their factories for two weeks during the Summer Break.  No work could be done on the cars, no design or parts remodeling, that sort of thing.  It's a health and safety thing instituted a few years back.

If teams wanted to design and build a new car for every race, they could, there's nothing in the regulations against it.  However, each new chassis/body piece would require crash testing to make sure it was safe on track.  Caterham has done just that; they're debuting a new nose at Spa to replace the shovel.  Well, better late than never.