F1 Quals: Abu Dhabi 2017 I'm a little pressed for time, but I didn't want to leave y'all hanging!  Here's the provisional grid for the 2017 Grand Prix of Abu Dhabi: 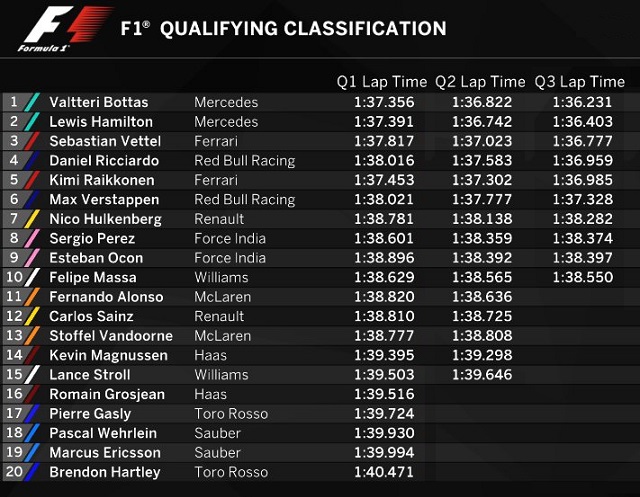 Different graphical format today... the usual grid layout isn't copying correctly, and Firefoxy doesn't work today for some reason.  So instead you get a picture!  Sorry... just imagine the nicknames, 'k?
Yup, Bottas is a full half-second ahead of the third place sitting Seb Vettel.  As predicted, the weather was perfect for the Silver cars, and thus one of the Mercs was fastest in all three phases of Quals.  It was Bottas that was the fastest when it mattered, though, setting a new track record in the process.  Unsurprisingly, Hamilton is now saying that he hopes we don't "have a train" in the race... I suspect he'd be saying "yes, please, choo-choo" if he was on pole, though.
So we're all set for the 2017 finale, tomorrow morning is looming soon.  We'll see ya then, then!

1 Toro Rosso may not be holding on to 6th. But if no one from Renault, Haas, or Toro Rosso scores points...which is possible... I guess we'll see.

2 Oh, and I didn't realize P4 in the drivers championship wasn't sewn up yet. Daniel is only 7 points ahead of Kimi. And for that matter, Bottas could theoretically take P3 if Vettel screws up badly enough. Well, that adds a little spice.

3 Did you get stuck with the new Firefox 57? It's been giving me all kinds of minor headaches. Some are just personal nits with the interface changes, although it IS running the Book of Faces a lot better. However on my mee.nu blog, it insists on putting something in all the text boxes, which keeps giving me blank More sections unless I clear them out, and adding a blank line at the bottom of my posts. (Comments seem okay).

4 No, about six months ago Firefoxy began to stutter and pause badly... to the point where I'd be typing and suddenly letters would stop appearing.  Then a second later, vavoop, everything I had typed would appear all in a rush.
Not just here... everywhere.  Also dropdown boxes, link clicking, etc etc etc.  So I moved over to Chrome, which works well but doesn't quite behave the same as Firefoxy.
For example, I cannot copy the quals results directly from the F1 website in Chrome... the formatting ends up broken quite badly.  So I'd start the post in Chrome, then open FF, copy and paste the results there, save it, then reopen it in Chrome.
But Saturday, FF was being particularly recalcitrant and I was supposed to be going to Thanksgiving Meal right then, so... I went the quick'n'dirty route.

F1 on NBCSN: Abu Dhabi 2017 So this is it.  Race #20 of 20.  The last of the season.  The last race to be covered by NBCSN and the Legendary Announce Team.  The last time we'll see F1 cars without an ugly piece of structure over the cockpit.  Perhaps the last time we'll see the well-known F1 logo.  The last race of Felipe Massa's career... again.  And the last weekend you'll have to listen to me whine moan and complain about Formula 1 for the season.  Here's the track map for the 2017 Grand Prix of Abu Dhabi:

I've said it before, I'll say it again probably: it looks like a great track to drive on.  It's proven, however, to be not so much of a great place for a race.  Like so many Tilkedromes, of course.  Maybe now that Liberty Media owns F1 (essentially) someone else will get a chance to design a race course?  Please?

Weather should be dry and hot, perfect for the Mercs, assuming they're not bolting 2018 test pieces onto their car for race experience.  Even then, they'll probably run away and hide.  But who knows?  Not I, for I am just a humble fan.

Who will be sad when the race is over, for it means that Steve Matchett and David Hobbs will no longer be providing coverage for Formula 1, for the first time since I became a fan in the modern era... 2004.  Those two, along with The Varsha and yes, even Leigh Diffey, have been the voice of F1 for me for 13 years.  But ESPN is going to go with the international feed and announcers next year, rendering the LAT mute... and moot.  So here, for the final time, is the broadcast schedule for the Legendary Announce Team:
Friday
Practice 2: 7a - 830a  live on NBCSN
Saturday
Quals: 7a - 830a  live on NBCSN
Sunday
2017 Grand Prix of Abu Dhabi: 630a - 9a  live on NBCSN
All times Pond Central.  Accept no substitutes.  Coverage of Quals will likely be delayed as Saturday is when I'm going to the Old Home Pond for the Thanksgiving  meal.
So there we go.  Let's all get ready, shall we?

1 Do we know what the announce team have lined up after this? Honestly, I genuinely enjoyed listening to their coverage and it added a lot to the sport. I wouldn't mind watching Le Mans or Australian supercross or whatever they end up announcing next, assuming it's not competitive motorized cross-stitch or something...

2 Well, The Varsha routinely works with Fox Sports as part of their more... esoteric... race coverage.  He's a big part of their LeMans team, for example.
I think I read somewhere that Hobbs is going to retire back to Milwaukee, help his grandson with his racing career.  Consider that "unconfirmed".
Matchett has apparently taken up poetry, just released a book of his writing.  I expect he'll end up doing written F1 stuff.
So... no, not really.  Just guesses.

Hamilton threw his car into the barriers after just a few minutes of Q1 had elapsed, ending his day early.  He later said that the crash "was very unusual" for him.  Well, yeah.  Kinda.  I'll say this for the newly-minted four-time WC, his wreck had style.  He went into Turn 7, the rear of the car broke free, and it looked for all the world that he was drifting the Merc through the turn intentionally.  That is, right up until the moment it went rocketing off through the kittylitter and buried itself in the tire barrier.  There were some anxious moments as Hamilton didn't reply right away to his pitwall asking if he was okay but eventually he confirmed no injury.  He did look at the back of the car for a while before walking off... clearly he thought something broke back there.
Other than that, though?  It appears the session wasn't all that exciting.  Sure, Bottas took pole at the very last moment from Vettel, but... well.  There are a LOT of penalties to be applied before the start tomorrow... Smiley Ricciardo gets a 10-spot, for example... so that'll jumble things up a little more for tomorrow's race.  Weather is supposed to be warm and dry... darn it.
So!  Race in the morning then!  Enjoy enjoy enjoy!

F1 on Somewhere or Other: Brazil 2017 Brazil.  Not my favorite race.  Oh, I don't hate it the way I hate Hungary... it's much deeper, this distaste I have for Grand Prix of Brazil.  The Hungarian Grand Prix, I just dislike the track.  Brazil?  I hate the entire weekend.  But first, here's the track map:

Okay, cool.  From all reports, most of the F1 community loves the circuit, loves driving there, finds the place to be a great challenge.  So why my bitter antipathy for Interlagos?  Back in the old days, when my F1 fandom was shiny and new, Brazil was the last race of the season.  That meant that my favorite brand of motorsport was going to be going away for four months, give or take, and it was all Brazil's fault.
I didn't say it was logical.
But because of all that, the weekend always felt gray and overcast, even if it wasn't.  Maybe particularly if it wasn't.  That we occasionally got reports of drivers or team members being threatened at gunpoint didn't help matters either.  But rain is, if not common, then at least not very rare at all, which literally made it gray... and slippery, too!  Bonus!
But now Interlagos isn't even the last race on the calendar so my distaste for the circuit doesn't even make sense anymore.  Doesn't matter.  Don't like it.
I do like the Legendary Announce Team however, and we've only got two more races with them until they are scattered to the winds.  Let's enjoy them while we can, right?  Here's the broadcast schedule:
Friday
Practice 2: 10a - 1130a  live on NBCSN
Saturday
Quals: 830p - 10p  decidedly not live on NBCSN
Sunday
2017 Grand Prix of Brazil: 930a - 12n  live on NBCSN
All times Pond Central Time.  I am disappointed, but not surprised, by the decision to show NASCAR practice instead of F1 Quals live.  After all, NBCSN will not have Formula 1 much longer... no reason to hype it up just to have it move to ESPN next season.  And thus we get Quals 12 hours late.  However, if you're in the mood, Practice and Quals will be shown right before the race back-to-back-to-back.  I'll still have the normal Quals report up Saturday morning/afternoon, whichever.  I'm not even going to promise the F1U! for Sunday... best laid plans and all that, and my track record hasn't been great recently.
But it'll be here!  I promise.  See you eventually then!

1 Well, I don't see quals live most of the season anyway...

Personally, I feel positive about Brazil after Max's amazing drive there last season.

2 I'm one for one!  I predict Verstappen will either win or DNF at least two cars!

There will also be continuing conflict in the Middle East, and there will be a massive disagreement about politics no later than this evening.

3 ...there will be a massive disagreement about politics...
I disagree!