F1 News: 2014 Pre-Season #1 As my laundry goes through the whump-whump-wadump cycle (as opposed to the wooga-wooga-wooga or wherrrrrrrrrrz cycles), it seems like a good time to get everybody caught up on the stuff that came out of the first 2014 pre-season test at Jerez. 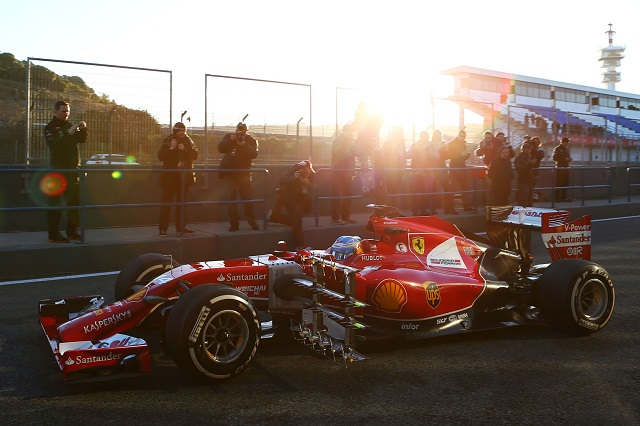 The biggest news was far and away the debut of the new V6 Turbo engines.  I had no doubt that they'd be quick... that's just what F1 is, after all.  What I was afraid of was that they would sound horrible.  The V8 era, in my mind, was nearly intolerable: that piercing scream, while undoubtedly impressive with its volume, was practically unlistenable to my ears.  The howl of the V10s sounded so much better, with a nicer lower-end to it, and don't even get me started on the sheer bliss that was the V12 era.   I figured that the new power plants would sound wimpy and tinny and yuck.  I was wrong... very wrong.  They sound great, and each manufacturer's sound is slightly different from each other.

Which brings us to the next bit of news.  The Renault powerplant had serious problems during the test session, to the point where defending champions Red Bull turned the fewest number of laps (21) during the four days of testing.  In fact, the problems were so bad that they gave up and went home on Day 3.  Fellow Renault team Toro Rosso had 54 laps over four days and... well, here, just give this a listen.  Caterham had problems getting their Renault engine to even start.  And, of course, Lotus didn't even make it to Jerez.  In any case, this lack of running time puts Red Bull on the back foot; Mercedes ran 309 laps, for example.  That's 288 laps of data less to work with, and with brand new rules modifying just about everything on a chassis this year, data is king.

Red Bull is also having problems with overheating.  This isn't new: Adrian Newey designs are always tightly packaged, particularly towards the back.  Reports are that overheating was happening even during the short runs on cool days at Jerez, and THAT'S a bad sign indeed.  On the other hand, it's merely the first test session, not the real races.  Except Daniel Ricciardo, new Red Bull driver, isn't so sure that things will be fixed in a hurry: "Time is still on our side. Even if we go to Melbourne still a bit whatever, it's a long season."  I'm not gonna bet against them, not this year, not yet.

In other news, Ross Brawn announced his retirement from F1.  Last season's Mercedes team principal stepped down from his position after a career in the sport that began in the '70s.  He has eight constructor's championships to his name, and his teams have also had eight driver's championships as well.  There were rumors that he would be moving to McLaren, but he squashed those this week at a fishing event.

McLaren did announce that recent Lotus frontman Eric Boullier has become their Racing Director, a position that didn't really exist before this.  He'll be in charge of the team at race weekends, but report to the still-to-be-named CEO of McLaren Racing otherwise.  Clearly a reaction to the hideous 2013 the team suffered.

Finally, Michael Schumacher was reportedly being slowly brought out of his medically-induced coma.  If you remember correctly, he suffered major brain injuries in a skiing accident at the end of December.  He's been in the coma ever since, after undergoing two surgeries to relieve swelling.  Supposedly he's been able to blink in response to questions, but there's been no confirmation of that from the doctors.  Still, we can always hope.

The Australian GP is just over a month away!

1 What is that thing mounted on the side of that car?

2 It's an array of sensors for measuring air flow.

3 While FDM is correct, I prefer to think of it as a James-Bond-esque set of wheelspikes.