McLaren Completes Driver Lineup As expected, Heikki Koveleinininnie has been named by McLaren to be their second driver for the 2008 season.  Recently booted from Renault so they could have HWMNBN and Junior Piquet, Heikki beat out Pete Rose (aka Pedro de la Rosa), McLaren's test driver in 2007.

Hm.  Think that Pete's involvement in the Stepneygate mess had anything to do with him not getting the drive?  Myself, I think not: he's not as good as the Finnish 'ninnie.  De la Rosa is a good driver, though, and if he doesn't stay on as the test driver, I'd be shocked if he didn't get a drive somewhere.

McLaren's driver lineup of Lewis Hamilton and Heikki Koveleinininnie is one that's pretty impressive for a couple of reasons.  First, of course, is their ability: Hamilton led the DC until the last race weekend, and Heikki, after a bad start to the season, came back strong and pretty much left his teammate Giancarlo Fisichella in the dust.

Second, though, is their age: Heikki is 26, Hamilton is about to turn 23.  That's probably going to be the youngest driver lineup on the grid in 2008 (David Coulthard, the oldest current driver, will turn 37 in March).

Still no word on Farce Force India's lineup... we wait with baited breath.

1 That is a good line-up for McLaren.  I'm already looking forward to the start of the season.

HWMNBN Gets A Drive As long speculated, Renault announced that HWMNBN and Nelson Piquet Jr will be their drivers for the 2008 season.  This means that both Giancarlo Fisichella and Heikki Koveleinininnie are looking for drives, though it's likely that the young Finn will wind up teaming with Lewis Hamilton at McLaren, and Fisichella is likely headed to Farce Force India.

HWMNBN, after his scorched-earth season at McLaren, will be reunited with Flavio Briatore, whom he teamed with in his Driver's Championship seasons of 2005-06.  He'll be expected to bring the team back into the championship hunt.  For his reported three-year, seventy-million Pound contract, he'd best also make the coffee and paint the white grooves in the tires.  Piquet, son of three-time Champion Nelson Piquet, is an up-and-coming driver who was Renault's test driver last season, and finished 2nd in championship points in GP2 in 2006... finishing behind Lewis Hamilton.  Many think him as talented as Hamilton... at least potentially.

So I guess the Silly Season has really begun in earnest now, huh?

Hmmm...wouldn't it be fun to watch Piquet bedevil Alonso the way Hamilton did last year.

2 And if, next February, McLaren gets DQ'ed for espionage, then the irony meter and the injustice meter will both melt, because Hamilton won't be able to drive.

Yeah, I'm starting to think that HWMNBN is a spymaster extraordinare.

4 I was a huge fan of Piquet Sr. when I was a kid. He drove a car with Parmalat sponsorship (I want to say it was a Brabham). They say that Piquet Jr. was every bit as good as Hamilton in GP2... I'd love to see Alonso get to deal with that again... last season showed what comes to the surface when he's pressured (and it wasn't pretty). As a lifelong Ferrari fan, I have to say that if Alonso ends up there 2009 (he has an opt-out clause with Renault after the first season)... I'll be crushed.

Wait... WHAT?!?!?! A ruling has been handed down by the World MotorSports Council in the Renault spy case.  Their public statement is as follows:

"An extraordinary meeting of the World Motor Sport Council was held in Monaco on December 6, 2007.

The World Council found Renault F1 to be in breach of article 151c of the International Sporting Code but imposed no penalty.  Detailed reasons for this decision will be issued on December 7, 2007, and a transcript of the proceedings will be published as soon as possible thereafter."
Let's put this in plain English: Renault is guilty of spying, but the FIA isn't going to do anything about it.  On the other hand, McLaren was fined $100million and excluded from the Constructor's Championship because of unproven allegations.

I can't wait to read their "detailed reasons", to see exactly how they justify this decision.  I'll admit that I just don't see how they can, but it'll be good for a laugh, if nothing else.  As a F1 fan, I now feel like the ruling body of the sport has just proven that they can't steward the sport fairly.

To repeat:  Renault ADMITTED they were spying, and the FIA isn't even going to slap them on the wrist.  Nothing at all.  I'm speechless at the level of disregard for the rules... from the people in charge of them, no less! 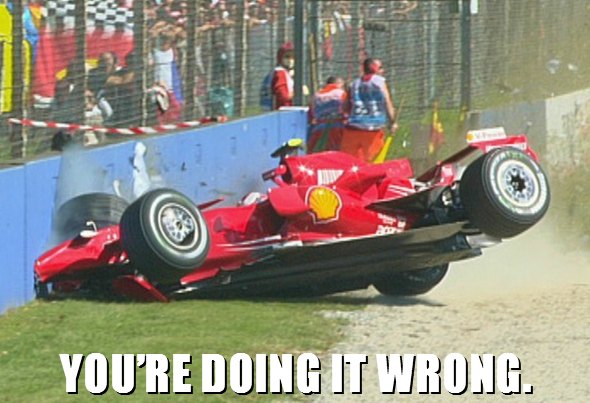 1 It will be... interesting... to see McLaren's response to this.

Wonder if McLaren could take the esteemed *rolling eyes* FIA or Renault  to a REAL court with...ya know, real judges with brains in their heads...and sue the pants off them for $100 million for defamation?

3 Utterly inconsistant - Renault should be subject to the same penalties that McLaren was earlier this year.  But these decisions seem to be made on the basis of whether or not Ferrari can get any benefit from them.  In the Stepney case this summer, Ferrari stood to benefit if McLaren was punished - the results of this investigation didn't matter so much to the red team, so this is what you get.

I suspect even the WWF would be less hypocritical.

4 Man, it's even worse. They let Renault off the hook, but they're leaving McLaren on the hook until February 14, a month before the 2008 season starts, when they'll decide whether to disqualify the team entirely.

This kind of thing is exactly why I love Formula I. The racing is often boring, to tell the truth, but the politics! Oh I love the politics. Remember the year they instituted the fuel checks becauset they finally noticed Renault had a guy in a Space Suit (not gloves and a mask - a real full-body Space Suit) fueling the cars? Odd that, given that the cars are supposed to be running on pump fuel.

Well they started checking the fuel, and at the first race in Brazil, it sure made a difference. For the first time in years, the usual suspects weren't on the podium. An exciting season for a change!!!  Until they checked the fuel and found out.... it sure as hell wasn't pump gas.

What to do, what to do? Removing these guys from the podium put the usual suspects in their rightful and usual places. Dull season on the horizon, Captain!

The answer was something that only the French could have dreamed up (although it's been used several times since) - the cars were disqualified but not the drivers!

You never know what Bernie is going to cook up in the back room.

So as it originally did in the McLaren case until Alonso screwed things up, it makes perfect sense that Renault had access to zillions of technical facts about their opponents but didn't use them. Right?

This kind of French-logic is what makes F1 exciting.

Renault's Day In Court Thursday is the day Renault is hauled in front of the World MotorSports Council.  They stand accused of espionage in 2006 and 2007, essentially stealing the complete plans for McLaren's F1 chassis in those years.

It will be interesting to see what the WMSC does.  There's substantial (as opposed to circumstantial) evidence against Renault, and the FIA has shown what they think espionage is worth, penalty-wise ($100million, exclusion from the constructor's championship).

If Renault is found guilty and doesn't get hit with a similar penalty, one might expect McLaren to go slightly batsh*t insane.  I'm thinking that Renault will be found guilty, but won't have anywhere NEAR the "McLaren Penalty" levied against them, because I have no confidence in the FIA to actually be consistent.

IIRC, McClaren has very, very deep pocketed backers, and even though a $100 million fine hurt, it didn't put them under.

Could Renault survive a $100 million fine? My guess is "no". So if they get hit with a lower fine, McClaren will rightfully go ballistic, but FIA will try to argue that "equal impact" is more important than "equal money".

Which won't wash, but that's what they'll say.

What's good for one (in the eyes of the WMSC), should be good for all.  If Renault's penalty is less than McLaren's, then McLaren should get a refund.