Mini-F1Update!: Japan 2014 Typhoon Phanfone awaited the Blundering Herd as they made their way to the grid at Suzuka, rain pelting down in great grand buckets that made one wonder if there would be fish waiting at the first turn.  It wasn't a question of if it would affect the race but how much.  THIS is your mini-F1 Update! for the 2014 Grand Prix of Japan.

*LIGHTS... UM... ER...:  The circuit was so wet that the race began behind the Safety Car, the field rolling off in grid order... and that's the way they stayed for two laps, save for Marcus Ericsson spinning his Caterham off at the end of the first lap.  He resumed at the back of the field.  At the end of the second orbit of the track, the expected Red Flag was thrown, bringing the proceedings to a halt.  Unexpectedly, the field lined up behind the Safety Car in the pit lane instead of the grid, sending pundits everywhere scrambling for the FIA rulesbook.  It turns out there are circumstances where this can be a thing, the teams brought out the gazebos and umbrellas, and we settled in for the latest installment of Rain Delay Theatre.  It became a guessing game, wondering if the FIA Weather Llama, Pedro, had figured what the typhoon was doing. 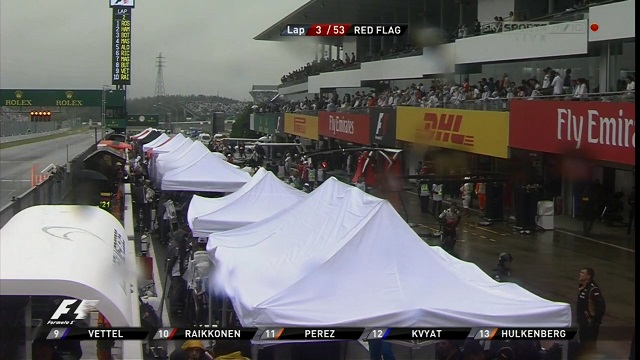 There's nothing deadlier than an enraged gazebo.

*RESTART AND SAFETY CAR:  After 25 minutes, it became clear that Pedro knew his stuff.  The rain had... not stopped, exactly, but was very much reduced.  The field was sent back out behind the Safety Car, their mandatory full-wet tires pumping 65 liters of water off the track per second... except when the cars hit rivulets deeper than the tire treads.  Then things could become exciting.  Halfway through the resumed third lap, the Ferrari of HWMNBN came to a silent halt at Turn 7, water having had an adverse reaction with the car's electronics. 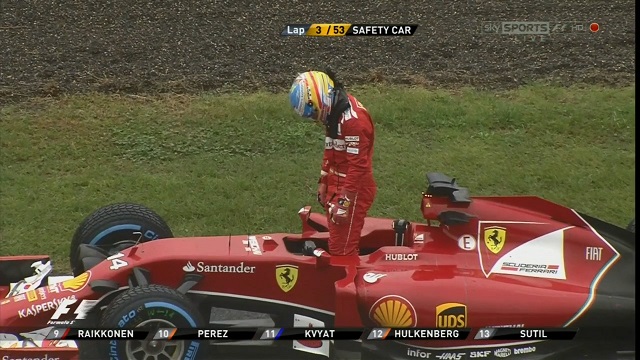 "I wonder if I can go to McLaren tomorrow..."

The recovery vehicle stationed at Turn 7 trundled out and hooked up the car, and all progressed as normal.  By the end of Lap 4, Mercedes' Lewis Hamilton was on the radio saying that the track was fine, let's go racing.  By the end of Lap 8, teams and drivers are discussing shifting to Intermediate tires, so well was the track drying.  Finally, on Lap 9 the Safety Car came in and we got our first racing of the day.

*BOTH OF YOU, RACE LIKE YOU WANT TO WIN!:  As has been the routine this season, the two Mercedes drivers, polesitter Nico Rosberg and Hamilton in 2nd, decided they wanted to be alone and immediately drove away from the rest of the field.  Indeed, at one point they were going faster on full wet tires than the rest of the field, most of whom had switched to Inters as soon as possible.  By Lap 25, the two were about 18 seconds ahead of then-third place Jenson Button.  Finally, on Lap 29, Hamilton made his move, passing Rosberg on the outside of Turn 1 in a lovely example of car control and knowing exactly where the limits of traction were.

*RUN TO THE END:  After both drivers put on new Inters, Hamilton began to pull away, creating a seven second gap back to his teammate, which is where it basically stayed.  However, ominous signs were in the air.  On Lap 40, the pit wall called out to both their drivers, warning them that the rain was coming.  Hamilton pointed out that it was already here, particularly in the first turn.  A couple of laps later, Jenson Button stopped for full wet tires, an indication of how bad it was getting out there.

*GRIM REMINDER:  If you've read The Pond since Saturday, you know what happened next.  Adrian Sutil aquaplaned off at Turn 7, the same turn that HWMNBN had his Ferrari die.  A hard shunt ended the Sauber driver's day, and the recovery vehicle trundled out to extract the broken car from the tire wall.  A lap later, the Marussia of Jules Bianchi aquaplaned off in the exact same spot as Sutil, jumped the curb, flew mostly over the gravel trap, and went under the recovery vehicle. 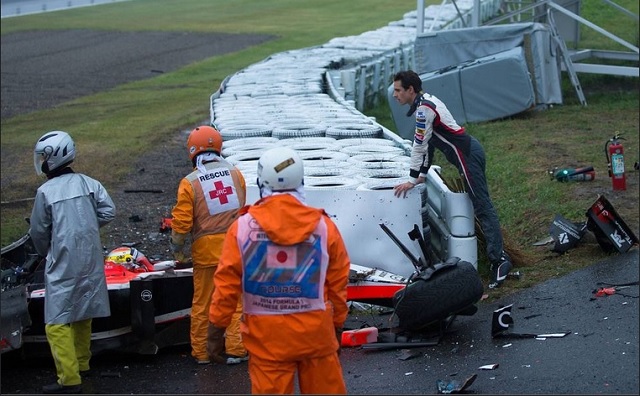 The immediate aftermath of the Bianchi accident.  That's Sutil on the right.

The Safety Car was called out , and was immediately passed on-track by the Medical Car.  After the field was picked up by Berndt Maylander, another red flag was thrown, and as the rain continued to pelt down, the sun dipped closer to the horizon, and an ambulance took to the cirucit, the race was halted.  Hamilton led Rosberg, Seb Vettel, Daniel Ricciardo, Jenson Button, Valterri Bottas, Felipe Massa, Nico Hulkenberg, Jules Vergne, and Sergio Perez across the metaphorical line.

*DRIVER OF THE RACE:  Lewis Hamilton.  In a season where the Mercedes has been the dominant car, Hamilton actually had to drive in today's bad-then-okay-then-bad conditions, and served notice that Rosberg is going to have to beat him for the championship.  After today, one gets the feeling that that isn't going to happen.

*TEAM OF THE RACE:  An honorable mention to McLaren, who made all the right calls today and, if the race hadn't've been red flagged, could have had a podium.  But the team of the race goes to Mercedes.  Another 1-2 finish, tough but fair driving on track, and the realization that there's no reason to wreck each other.  A good change from earlier in the season.

*MOMENT OF THE RACE:  Considering the pall it put over the rest of the event, Bianchi's crash gets the nod.

"Everything that happened with the racing on track is secondary today, one of us is in a bad shape and we don't yet know how he is. Jules had a bad accident and we hope to have some very good news, very soon. Not knowing what's going on feels terrible, I think all the drivers really feel with him, as we know how difficult and slippery it was today; we hope for the very best." - Sebastian Vettel, speaking for all of us.

Next weekend, the F1 Circus moves to Sochi for the inaugural Grand Prix of Russia.  We'll see you then.

1 One thing that struck me... I didn't hear anyone mentioning the Caterham argy-bargy in the commentary, even though they had plenty of extra time during the first red flag to talk about stuff. I wonder if they had instructions not to mention it?

(alternative explanation, I was running a high fever and just didn't notice/recall it if they did...)

2 They probably did not care. It's not an important team. I heard that Marussia was adopted by Russian MSM as a "national" team (and I quote-unquote because its link to Russia is fairly slight). When they go under, the media at least can latch on the hate of Putin. Catherham though... Not even that.

3 Av, you may or may not have been running a fever, but they really didn't talk about Caterham's situation.  They did during coverage of practice, but that was it.  No mention during quals, nor during Rain Delay Theatre.  Of course, RDT was shorter than they usually are, but still.

One thing I've found, Pete, is that the Legendary Announce Team is willing to talk about any team if there's news behind it.  But you have some truth to your statement: they do talk about the other nine teams more than Caterham and Marussia.

1) The video will make it's way to The Pond when I'm ready for it to be here, not before.
2) I'm taking the official stance on Bianchi's condition from both Marussia and the FIA... to whit, everything is speculation until it comes from them or his family.