The OTHER Six-Wheeled F1 Cars Mauser mentioned that Instypundito was linkin' to a six-wheeled F1 car, and asks what the deal was.  Well, I'm not gonna go look to see which one he's talking about because what's the fun in that?  Instead, I'm going to talk about the THREE different six-wheelers that were built for F1 purposes that aren't the famous Tyrrell P34 (aka "Wonderduck's favorite F1 car").

THREE???  Yuppers, three.  Teams saw the possibilities of the P34 and, as is normal in Formula 1, decided to steal the idea and... "improve"... it.  Needless to say, none of the teams in question ever actually raced their cars, just tested them.  Probably the best of them was the March 2-4-0. 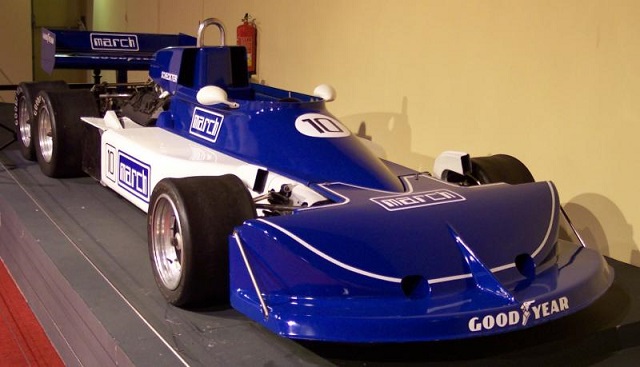 The idea behind the 2-4-0 is the exact opposite of the P34.  The P34 had two small tires on either side up front to improve aerodynamics by lessening drag, which the March designer thought was kinda dumb, because the normal-sized rear tires were still huge sources of drag.  Instead, March went with normal tires (which, it might be pointed out, weren't going to cause Goodyear headaches in developing...), but had four driven wheels in the back.  The drag would be counteracted by the immense improvement in grip.  It worked like a charm, except for two problems.  First, it chewed up gearboxes like nobody's business.  Second, the car was horribly overweight.  If the team could have gotten the gearbox problem solved and put the chassis on a diet, both of which could have been accomplished eventually, there's nothing inherently wrong with the idea and no reason that it wouldn't have been successful.  It was a good enough idea that Williams copied the concept a few years later for their FW08B. 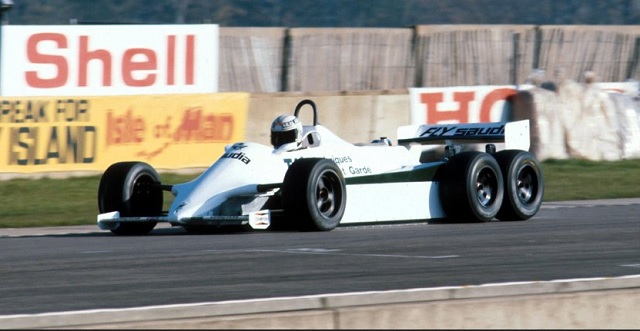 Like the 2-4-0, the FW08B never actually raced, and will go down in history as the car that drove the FIA to define a F1 car as having four wheels, with only the two rear ones being powered.  Williams' designer Patrick Head said that the main reason that the FW08B was never raced was that it would have caused nightmares during pitstops.  I suppose that's true, but it's more likely that the FIA just hated the idea.

Finally, we come to the really weird chassis, the Ferrari 312T6. 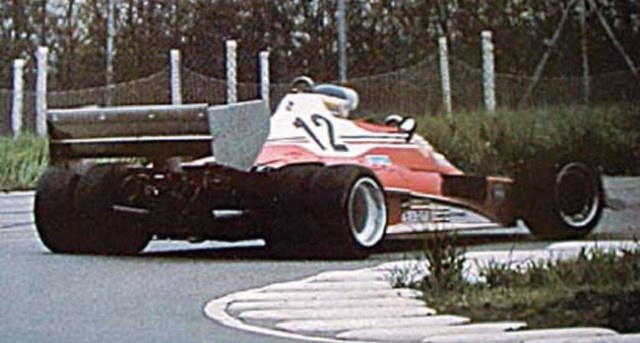 Yup, four rear wheels on one axle.  I'm not sure what Ferrari thought they'd get out of this layout, particularly since it was too wide to fit the Technical Regulations.  In testing, it was found to be something of a pig, handling-wise, and had a tendency to have rear-end problems.  In other words, it broke easily and caught fire once.  Considering that they had a double-championship season in 1977 with the normal 312T, Ferrari didn't really need to be playing around, and it was condemned to the ash pit.

And that's the story of the other Six-Wheelers.

1 I watched a series of documentary programs about early British rail a couple years back, and now when I see X-Y-Z nomenclature I expect to see a set of rails under whatever's being described...

The biggest problem with the last one would be changing the tires! How in hell can you do so rapidly?

Actually, as I think about it, that's not an insoluble problem. If the wheels share a single central hub half-way between them, that becomes the place where the bolts go.

3 Those dual rear's would pretty much have to have the hubs offset to the center and bolted together.  Which would make wheel and tire management a pain.  Even then, it's going to be large and heavy enough to slow down a pit stop substantially.  Then you have to think about the effect that's going to have on suspension geometry, with the massive limit on camber adjustment implied by an effective tire width that large.  And I don't even want to think about keeping the brakes cool...
The 2-4-0 on the other hand is going to have substantial advantages in terms of suspension load, brake bias and wear, rear grip, and power delivery.  But all of those problems can be solved with traction control systems and aerodynamics without having to stretch the car, etc.

5 The number two car was in the photo set, but it's possible there may be a fourth.  Here's the original compilation. It's possible the other one is the 2-4-0, but the roll bar looks different.

There's also a lot of really weird stuff in there.

6 The second picture of the three F1 cars on that page is the March 2-4-0 converted to hillclimbing mode.  The third is the Williams.