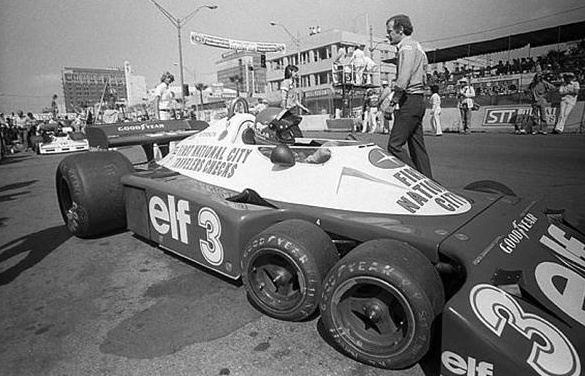 Okay, yes, it looks a little weird to our eyes, but there was a good concept behind it.  Since the biggest cause of drag on a F1 car is the tires, and by the rules you can't cover the tires with bodywork, just make the front tires smaller!  Brilliant!

Of course, by reducing the size of the steering tires, you lose grip.  No problem, just add another set!  Add a well-faired nose, and you've almost managed to cover the tires completely and still stay within the rules.  Now THAT'S how F1 is supposed to work.  Brake cooling was a constant problem however, and the front tires constantly distorted at high speed (being smaller than the rears, they rotated faster.  Stresses easily dealt with by the larger tires became much more pronounced in the 10" fronts).  The car also had unique steering properties... so much so that while Patrick Depailler was able to figure it out, his teammate Jody Scheckter was never comfortable behind the wheel.

In 1976, the P34 actually finished 1-2 at the Swedish Grand Prix, took 2nd at the Japanese Grand Prix in a huge rainstorm, and had some other podiums as well.  While it competed in 1977, shortly thereafter the rules were changed to define a F1 car as having four wheels, consigning the car to the ash heap of history.

Corgi released a diecast car of the P34, which I was lucky enough to own back when I was a young duckling.  Wish I knew what happened to it!

2 I found a great site a while back with all sorts of info on the development history of that car, I'll have to see if I can find it again.  One of the interesting tidbits was that Goodyear already had its hands full, and didn't want to have to do F1 level development of a third tire size, and so was one of the stronger agitators behind the 4 wheel definition.  That lack of development support from the tire manufacturer is also listed as a big reason why the car didn't place high consistently during the seasons it ran.

3 The extra wheels aren't the only reason that car looks odd to the modern eye. There's also the lack of an air scoop!

4 David, I think you're probably thinking about the Project34 website, which I actually just discovered this morning as I was throwing this post together.  Anything you could possibly want to know about the P34, all in one place.

Steven, it's funny you should say that... the prototype of the P34 actually did have an airscoop, but sometime before the car took the track for the '76 season, it disappeared.

After all these years, you just linked to this page again, and I visited it again.

That last picture doesn't show an airscoop. Notice that you can see the engine? What you thought was an airscoop is actually the body folded back to reveal the engine.

6 Um... I hate to disagree with you Steven, but... well... you're incorrect.  I understand why you thought that, though.  In fact, it's partially because we're not used to seeing the engines on cars racing today and partially because it's such an odd design feature.  But yet, there you are: an exposed engine with an airscoop.  The Project34 website doesn't clarify why it was designed that way, nor why the 'scoop went away, but I'm guessing there were engine overheating problems and removing the bodywork around it made life cooler.

Then there was this weird configuration used only at the P34's first race and never seen again.  Let's slowly move away and forget we ever saw that... eesh.

7 I just went through my folder of pictures from the historic races at Laguna Seca last year, and there were at least five F1 cars from that era that had a partially covered engine. Some had air scoops, others just had bodywork running over the top of the engine but big air gaps on the side for the exhaust and presumably cooling. I suspect they were trying to get good airflow to the wing while still keeping the exhaust at reasonable temperatures.
I wasn't able to determine what they all were from my photos, but I was able to identify two as the March 76, and Lotus 77. I suspect two others were March bodies in other livery. I'll have to look up what the Shadow team was using, and whether Jagermeister was just a sponsor or what. The McLarens of a little after that era showed what seemed to be the trend, the top of the engine was exposed, but the bodywork was fully enclosed on the sides with the exhaust in ports like we see now.