F1 Quals: Italy 2012 When a Ferrari driver wins a race, the church bells in Maranello ring in celebration.  When a Ferrari driver does something good at Monza, all of Italy takes notice.  So are the tifosi being deafened by bells pealing across the nation?  Let's take a look at the provisional grid for the 2012 Grand Prix of Italy:
diResta has a five-spot grid penalty for a gearbox change.  Maldonado has two five-spot penalties for his actions at Spa-Francorchamps.

It's very quiet in Italy this afternoon... not only has Ferrari not gotten pole, but the hated McLaren has locked out the front row completely!  Row two is entirely ex-Ferrari drivers: Slappy Schumacher moves up after DiResta's penalty, and Felipe Massa*.  I suspect the tifosi are... confused over what to do when it comes to Slappy.  I mean, he's not driving for the Prancing Horse, but he had some small amount of success with them; do they cheer him, boo him, or clap politely?  I'm pleased to say that I don't expect him to win tomorrow, so my head is not about to explode.

No surprise regarding the performance of the Red Bulls, they just aren't great on tracks that need ultimate high speed, and yes, I'm aware that Vettel won here last year.  That was the RB7, a car that could honestly be placed in the conversation for "best F1 car of all time."  It wouldn't win, I don't think, but it needs to be considered (the McLaren MP4/4 is my vote for best, by the way: 15 wins out of 16 races, and 10 of those races were MP4/4s finishing one-two).  The RB8 hasn't shown anything resembling that level of ability this year.

One disturbing problem shaping up this year is that Monza's surface is noticeably less smooth than it has been in the past.  Gandalf Kobayashi says that he nearly lost control of Shadowfax in P3 today... driving down the front straight.  There's been a number of gearbox problems as well; HWMNBN had his crap out on him yesterday, Paul diResta changed one last night, and his teammate at Force India, Nico Hulkenberg, had his fail going into the first chicane on his first flying lap in P1.  We know that everything on a F1 car is machined to the most exacting tolerances possible, but nothing moreso than the gearboxes.  These are devices that can be disrupted by overly-powerful electrical wiring under the track, for heaven's sake.  Hitting them with weird physical vibrations, such as one might encounter on a newly bumpy Monza, is probably a great way to turn them into a handful of hate and metal shavings.  So reliability may be an issue on Sunday, too.

Finally, a milestone has been reached in F1 this year: this was the first time this year that Narain Kittylitter outqualified his teammate!  Next up, Kittylitter wins Monza. 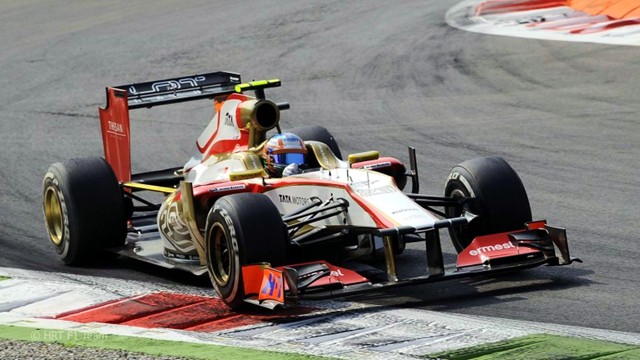 Okay, maybe not.  See you tomorrow!