F1 Quals: Great Britain 2012 Yup, it rained.  A lot.  So much, in fact, we had a red flag for weather conditions in the middle of Q2... that lasted for over an hour.  It lasted for so long that The Pond's DVR didn't catch the last two minutes of Q3, arrrrgh. 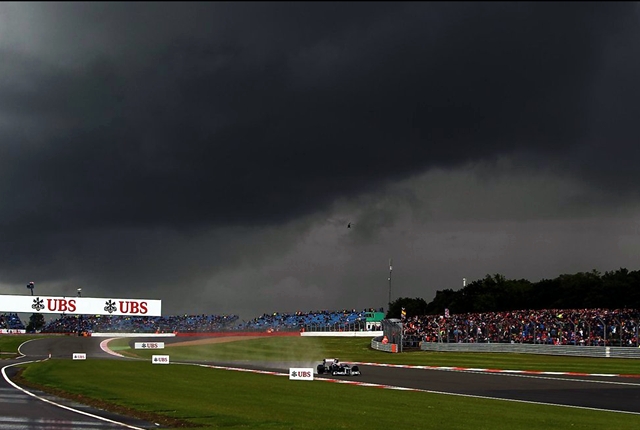 Q1 started in less-than-wet conditions, but then the rains came.  Q2 started right on the edge of difference between Intermediates and Full Wets, but only four drivers even tried to take the gamble.  None of them were able to turn a full lap before all heck broke loose.  While the drivers soldiered on gamely, the conditions went from "awful" to "half the contents of the English Channel dumped on track".  Let me put it this way: Slappy Schumacher used to be called "Der Regenmeister" for his skill at driving on a wet circuit.  On the final lap before the stewards threw the red flag, he went off-track four times.  One of those times, he seemed to slide sideways for a couple hundred meters before his Mercedes ground to a halt.  It was Korea-bad, that's how bad it was.  So what does the lineup look like after all this rain?  Here's the provisional starting grid:

Jenson Button's lousy record at his home race continues; only twice in the past seven GP of Britain has he qualified higher than 14th, and he's never finished on the podium.  He just couldn't get anything going with the McLaren today, and he's actually lucky he's 18th... it could have just as easily been worse, he was going so poorly.  On the other hand, Mumbles Raikkonen had his KERS unit fail in Q1 and they never got it repaired.  The weather was so bad that a lack of KERS didn't hurt him: pressing the "Go Fast" button probably would have just thrown a car off-circuit anyway.

As is usually the case when a grid is scrambled by rain, there's no guessing who'll win tomorrow, when it's supposed to rain heavily again.  No predictions this time around, in other words... your guess is as good as mine, and possibly better.

Race is tape-delayed tomorrow, we'll be up afterwards with the F1U!

1 Let's all root for Schumacher! He hasn't had a win yet this season.

2 Let's all root for Schumacher!

Good luck getting anyone to jump on that bandwagon, Steven.  I, for one, still have it in for that so-and-so, after all his dirty tricks through the years.

The clouds in that first photo look downright ugly--I didn't think Great Britain got those sort of wrath-of-God storms.  IIRC, one small tornado hit Birmingham a few years ago, and it made the headlines all over the world.  Was it just a lot of rain, or was there thunder/lightning/wind/hail/plagues of locusts/etc. as well?  (I missed qualifying, thanks to the vagaries of cable TV up here in Canada;  SpeedTV's coverage was blacked out, but the sports channel that has the rights is currently on an all-Wimbledon-all-the-time kick, and shuffled qualifying to a secondary channel I don't have access to.)

Ah, C'mon. Let bygones be bygones. Don't you want to see an old man win an F1 race? Let's set some more records this season! Most drivers to win a race! Oldest guy to ever win a race!

4 If Slappy wins, my head will explode.  Do you really want to see that?

(Slappy wouldn't even be close to the oldest man to win a F1 race...St Fangio the Quick won his last race at the age of 48, for example)