F1 Practice: Great Britain 2013 We had lovely British weather today at Silverstone, so you can guess what that means: 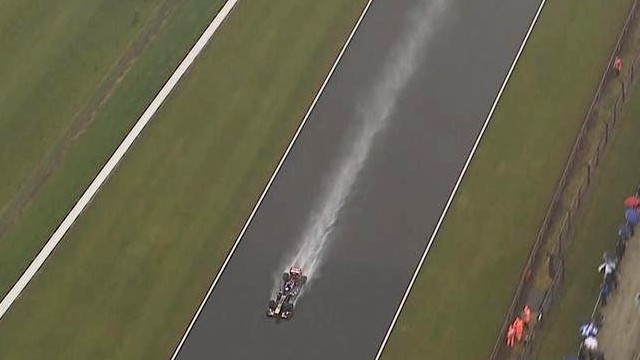 Yup!  Rain, and lots of it!  First practice was practically wiped out.  P2 saw teams out and about, but the track was just wet enough that there was something of a feeling of restraint the entire session.  Even that wasn't enough to save Felipe Massa from wrecking again.  Twice at Monaco, once in Canada, now at Silverstone... dude has something against his Ferrari mechanics, I think.  While the teams did try to get some new parts tested on their cars, they probably didn't get accomplished.  So let's skip over practice and talk about the really big news of the day.

Mark Webber announced his retirement from Formula 1, effective at the end of the season.  He's not retiring from racing; he'll be joining Porsche's newly reborn LMP1 program in the World Endurance Championship series, which includes, of course, the 24 Hours of LeMans.  Arguably, this is a step up for the Aussie, as he'll be heading what should be a serious contender right away.  It's also a return to endurance racing for him, as he first came to the attention of the racing world via the long races.

Unfortunately, the loss of Mark Webber means that the man called "The Conscience of Formula 1" will no longer be speaking truth to power.  He's always been outspoken... he stepped out against racing at Bahrain, quite loudly in fact... and he certainly stood his ground against his teammate.  Red Bull's support of Hannibal Vettel has often come at the expense of Webber (consider Helmut Marko's attempt to blame the 2010 incident at Turkey on the Aussie), and at this year's Malaysian Grand Prix, Vettel ignored team orders, took the win from Webber, then got no penalty from the team in return... well.  It was pretty clear at that point that Webber had had enough.

We here at F1U! don't have a favorite driver at the moment... but if we did, we could be convinced that Webber would be worth supporting.  He'll be missed from F1, and I suspect from Red Bull as well... but at least we'll see him during LeMans.

1 Good news for a Duck

2 I think it's a good move for Webber.  He stands a plausible chance of winning Le Mans with Porsche.  A better chance than he has of winning the F1 WDC.  So if he's a true racer who wants to win (and I believe he is) then it's a good move.  And for all the talk of F1 being the pinnacle of motorsport, Le Mans is on a similar level in terms of challenge and prestige.  Also, it's well known that Webber isn't a fan of the upcoming V6 turbo rules.  I will miss him in F1, but I think he's made a good choice.

3 I think it's a brilliant move for him.  There was a tiny bit of me that wanted to see him in V8S or NASCAR... I think he'd immediately become one of the most popular drivers in the latter group, and he might be the only F1 driver with the right attitude to fit in... but Endurance racing is even better.

And I think that it, rather than F1, is now the pinnacle of automobile technology.  I'd love to see a race between a LMP1 and a F1 car around the Circuit de la Sarthe.

4 I agree on the WEC being the pinnacle of technology; the technical regs being a little more open, it's great to see a mix of diesel and petrol fueled cars, electric and flywheel hybrid systems, all competing together.
I'm glad he didn't go to NASCAR, because then I might feel like watching NASCAR races... as it is, I watch Daytona, Sonoma, and Watkins Glen, and that's about all the NASCAR I can stand.  V8 Supercars is an interesting series, but I liked it better when it was still a production-based touring car series; now it's more like NASCAR, DTM, and Super GT; a series for race cars that only cosmetically resemble production cars.