F1 on TV!: Germany 2012 After an odd weekend in Britain, where it rained all weekend except during the race, the F1 Circus loads up and makes its way across the Channel like so many carbon-fiber B-17s*.  Destination: Germany!  Located in the Upper Rhine valley, the city of Hockenheim hosted its first race at the Hockenheimring in 1932.  The circuit was rather badly damaged during the war, with the track surface torn up by tank treads and pretty much all facilities razed to the ground.  Fortunately for all concerned, the area had bumper crops of both tobacco and asparagus for many years afterwards, to support the city while they rebuilt the circuit.  Nowadays, the Hockenheimring shares the Grand Prix of Germany with the Nurburgring GP-Strecke, aka Nurb Jr.... and this time around, it's the turn of the Spargelstraße to host!  Let's take a look at the track map: 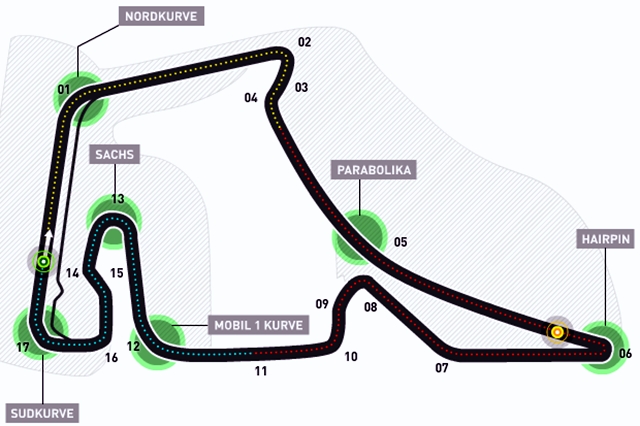 It is, admittedly, a pale substitute of the "old" version of the circuit.  Where there's a right-hand turn at Turn 2, the old circuit went blasting straight on into the nearby forest until it reached a chicane called  "Clark."  Named after Jim Clark, the legendary driver who was killed in a crash on that straight, the chicane slowed the cars down for the famous Ostkurve, before they came blasting back down another seemingly infinitely long straight, returning to the "modern" track at what is now Turn 6.  The high speeds involved were only one reason for the truncating of the circuit; the long, long straights were out of sight of both the grandstands and the F1 cameras for all intents and purposes.  The new layout at least allows people to see the race.

Unfortunately for everybody, what they've seen in the past has been pretty much a series of parades and processionals.  Welcome to another Tilkedrome, in other words.  For all intents and purposes, it's Sebby Vettel's home track: his hometown is a half-hour away.  Of course, with five out of the 24 drivers being German (Vettel, Slappy, Rosberg, Hulkenberg, O'Glockenspiel), it's a popular place.  The track itself is your typical Tilke abomination, long straights followed by tight turns, then stumbling into a tacked-on "Stadium" section.  The asphalt is neither particularly abrasive nor slippery, and with this being the first time we've had Pirelli tires here, it wouldn't matter either way: nobody has any data to work with!

So the practice sessions will be particularly important this time around!  Fortunately we'll have the good men of the Legendary Announce Team with us all weekend long... even on FOX, thankfully the last time this season we'll have to put up with tape delay!  Here's the schedule as I know it:

1 VonKrag, I've said it before, I'll say it again: use the friggin' link button.  And no, trying to post the video inline is bad.