F1 Update!: Great Britain 2012 While it hadn't been raining for the proverbial forty days and forty nights, it had rained a lot at Silverstone Circuit, to the point that the race organizers asked people not to come to Quals.  So what effect did the weather have on the field as they pulled onto the grid?  THIS is your F1 Update! for the 2012 Grand Prix of Great Britain!

*WHAT IS THAT?:  As 23 cars pulled onto the grid (The Red Menace's engine went ploin! halfway around), there were shadows on the ground and a flaming ball of burning gas in the blue sky.  Yes, that's right, the sun made an appearance today.  The Legendary Announce Team said that there was rain in the area that would show up around halfway, but it never happened.  This is not as beneficial to the teams as you might think; pretty much everybody had a wet-track setup on their cars.  Still, when everybody is wrong, ain't nobody disadvantaged, we suppose.

*LIGHTS OUT:  Once the field got away, polesitter HWMNBN made it perfectly clear that Ferrari had completely turned their season around.  Back at the beginning of the year, their car was totally uncompetitive, and only the Spaniard's skill kept it anywhere near the points.  Now he cut hard across the nose of Red Bull's Mark Webber and began to head off into the sunset.  When Seb Vettel pitted on Lap 11, his soft tires worn to nubs, it looked like HWMNBN's gamble of starting on the Hard tires had paid off.  It looked doubly so when Webber brought his car in on Lap 15, soft tires exhausted and failing.

*NEXT UP:  HWMNBN brought his Ferrari in for another set of hard tires the next lap, with enough of a lead to stay five seconds ahead of Webber.  In a complete inversion of the usual case, the Hard tires were clearly the compound to be on, both fast and durable.  The Soft rubber just wasn't doing much.  Continuing his domination of the race, HWMNBN continued to open the lead, reaching 19.8 seconds when Webber stopped for another set of hard tires on Lap 34.

*THAT'S OMINOUS:  The dark clouds beyond Woodcote made Ferrari's plan very clear: run on the hard tires as long as possible until the rains came, make one less stop than everybody else, and stand on the podium in wet-weather slickers, galoshes and Ferrari-red umbrellas.  All they needed was for the rain to fall.  The problem with this strategy should be clear: if it doesn't rain, you're stuck on the poorer-performing soft tires at the end of the race.  When HWMNBN's tires fell off the cliff and he began to cough up a second per lap to the fresh-tired Webber, he pitted for Soft tires on Lap 39.  He emerged from the pits still in the lead, but now desperately praying for the rains to fall so he could get off the Soft tires for something... anything... else.

*PROHIBITION IS ALIVE AND WELL:  It stayed dry, and Webber began to stalk the red car, taking chunks out of the Ferrari's lead each lap.  On Lap 45, the lead was down to a half-second, and Ferrari had sent half of their pit crew out behind the mobile homes to do a frantic rain dance.  Missing a supply of eagle feathers and tomahawks, their shimmying had no effect and the clouds refused to open up.

*AND THEN...:  Inexorably, the Australian Red Bull driver, the support of the crowd firmly behind a member of the Commonwealth, closed in on HWMNBN.  It was just a matter of time, and Webber waited patiently until his opening came.  With five laps left, he cleanly slipped by the Ferrari for the lead and drove away, eventually winning by three seconds.  HWMNBN finished second, with Seb Vettel less than two seconds behind him.  Five seconds further back, Ferrari's other driver, Felipe Massa, finished a desperately needed fourth.  It never did rain.

*DRIVER OF THE RACE:  The first lap of the race was rather confused and exciting, with plenty of action, at least one occurrence of three-abreast racing through a turn, and more than a little carbon fiber shed.  In the biggest incident, Lettuce Grosjean made contact with Paul di Resta, which eventually led to the Force India driver retiring from the race.  Grosjean, a slow puncture affecting his tires, pitted on Lap 2 for new soft tires, falling all the way down to 22nd... effectively last place, what with di Resta retiring and The Red Menace having died on the way to the grid.  Over the course of the next 50 laps, the Frenchman drove a sterling race, eventually finishing in a more-than-solid sixth place.  Not bad for someone who was told they weren't good enough for F1 a few years ago.

*TEAM OF THE RACE:  Red Bull.  They out-strategized Ferrari, then outran them on a circuit that really favors cars that have different strengths than theirs possesses.  They then finished 1-3.  How can you not give them the award?  Honorable mention to Ferrari, 2-4 at the end of the race, jumping to 2nd in the Constructor's championship, and HWMNBN leads the Driver's championship.  Not bad at all.

*MOVE OF THE RACE:  Late in the race, Red Bull's Mark Webber had the tail of HWMNBN's Ferrari in his sights as they both roared down the Wellington Straight. 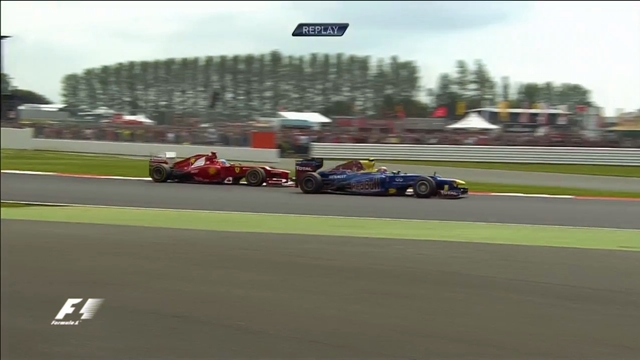 Using KERS and DRS, he pulled past as the two ran into the big sweeping left-hander, kept his momentum up, and was able to keep the Spaniard behind when he tried to counterattack.  A perfectly clean pass, not the most dramatic in the world, but it WAS the most important: it was for the lead, after all.
*MOOOOO-OOOOVE OF THE RACE:  On Lap 38, Gandalf Kobayashi, locked in a legit struggle for points, swept into the new pit lane right at the speed limit, his Sauber team kneeling in position to receive their car.  Nothing out of the ordinary here, something the Japanese driver had done hundreds of times before... except this time, apparently distracted by something bright and shiny, he hit the brakes a moment too late. 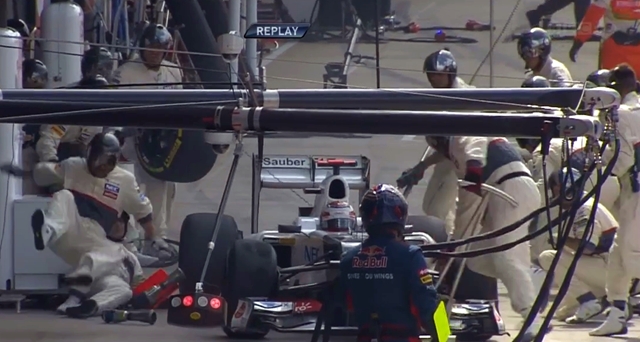 In the process of locking his clampers down, he skidded into four of his mechanics, wiping out the front jackman and the three front-right tirechangers.  Fortunately, nobody suffered anything more than bumps and bruises, though there are reports of a sprained finger on the wheelgunner.  Because nobody was hurt, I'm happy to give Gandalf his well-deserved Moooooo!
*SELECTED DRIVER COMMENTS OF THE RACE:


"You know, I thought HWMNBN was playing possum, protecting his tires, right up to the moment I passed him." - Mark Webber

"I appear to have something of a reputation, no?" - HWMNBN

"Do you realize this is my first podium since Bahrain, five races ago?" - Seb Vettel

"Is this the lowest position someone has finished in, and still gotten the Driver of the Race award?" - Lettuce Grosjean

"I just didn't want to have Wonderduck's exploded head on my conscience." - Slappy Schumacher

"I thought we were better than this.  We're McLaren.  We're supposed to be better." - Lewis Hamilton

"I score points when my job is threatened." - Bruno Senna

"I'm conflicted.  It's my home race, I should love Silverstone.  But I flat-out suck here, so I should hate Silverstone.  And who the hell was Milton Keynes, anyway?" - Jenson Button

"Why didn't it rain? Why?" - Nico Hulkenberg

"I was wringing the neck out of the car." - Daniel Ricciardo (note: real quote)

"On the surface there is hunger and fear. Men still exercise unjust laws. They fight, tear one another to pieces. A mere few feet beneath the waves their reign ceases, their evil drowns. Here on the ocean floor is the only independence. Here I am free! Imagine what would happen if they controlled machines such as this submarine boat. Far better that they think there's a monster and hunt me with harpoons." - Jules Vergne

"My race was compromised by the collision with Perez." - Chaplain Maldonado (note: real quote; see Perez' quote, below)

"Well, that was uneventful." - Heikki Kovaleinninninninnie

"I finished 18th, but that's better than having food poisoning and throwing up in my helmet, so I'm okay with it." - Tim O'Glockenspiel

"We couldn't get past the HRTs.  Dear god, what did I just say?" - Charles ToothPic

"No it didn't." - Narain Kittylitter

"(Chaplain Maldonado) is a driver who doesnâ€™t respect other drivers.  Itâ€™s just a matter of fact.  I donâ€™t understand the way he is driving.  This guy will never learn if they donâ€™t do something, because he is a very dangerous driver and he can hurt someone." - Sergio Perez (note: real quote)

Well, that's all from a strangely dry and a little dull Silverstone!  Two weeks from now, we'll be in Hockenheim for the Grand Prix of Germany, and a visit from Vaucaunson's Duck to boot!  See ya then!

1 Has the return of the 107% rule actually stopped anyone from racing yet?  Toothpic missed the time this race, but got to run anyway.

2 Karl, HRT has missed the first race of both this and last season due to the 107% rule.  A lot of it depends on the pace shown in practice; if ToothPic shows in the practices that he can consistently beat that level of speed, but sucked in Quals (for whatever reason), the Stewards have the option to let them in.

This would prevent Lotus, for example, of being caught out by a sudden rainstorm in Q1, and not reaching the 107% level.  Like every other rule in the FIA book, it has wiggle room.