Jenson Button: Just Geeky Enough To Like I stopped rooting for a specific driver when Zsolt Baumgartner's career came to a halt.  There was a short resurgence when I realized that Takuma "Suicide" Sato was insane, but it ended when he left Formula 1.  Similarly, the part of me that cheered for one team only died when Minardi took its final bow.  It twitched a bit when SuperAguri took its place on the grid, then stopped moving for good the day that team shut down (and had pieces of their cars sold to the highest bidders).

I say all of this so you, my readers, do not take this as my designating someone as my favorite driver, but Jenson Button has cemented himself as a-okay in my book.  Why, you ask?  Well, here's his new twitter profile picture: 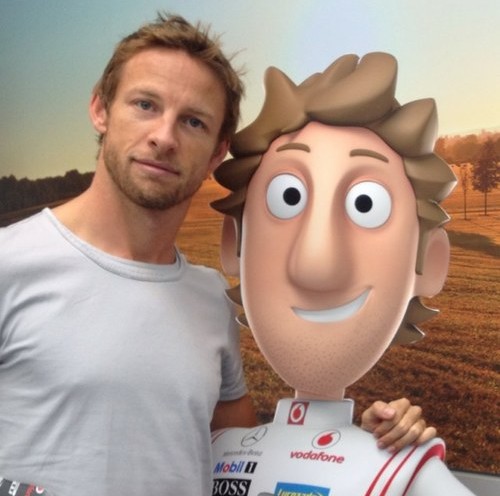 For some reason, I just can't see Seb Vettel or HWMNBN doing something like this, can you?

1 JB is certainly a-okay in my book too, but I dunno, on Top Gear, Vettel joked about being slow to pick up potty training as a child, so he's not above having a little fun at his own expense.  And Alonso posted that picture with the sunglasses.  It's his behavior on the track (...in the pits!) and in the paddock that make me think Alonso is a bit of an ass and a primadonna, but at least he still has some sense of humor & fun, playing cameraman on the podium and posting silly Twitter pictures.
I don't really have a favorite driver either.  Except maybe Kimi.

I hope we get to see Perez in a second season of Tooned.

2 I'm trying to figure out if that thing's a flat cutout. I'm guessing it is. But they did such a nice job on shading on it that it's hard to tell.

3 I'm not even sure it's actually there!

4 I think it is. JB's left hand, the fingers on the shoulder of the chibi would really be hard to do that way if the chibi was being added later. There's no reason for them to not make a full-size cutout for him to pose with; easier, and the result would look a lot better.

5 Actually, now I'm sure it's flat, and his hand is the giveaway. If the chibi was 3 dimensional, his fingers wouldn't be like that. He's holding onto a cutout. No doubt about it.