F1 Tids and Bits While we wait for another 12 days and a few hours to pass before the next race, here's some news from around the F1 world...

First off, excellent news!  Robert Kubica was released from the hospital today, some 10 days earlier than was expected.  While still using a walker from all reports, he's progressing so well that the doctors decided that the best thing for him was to go home for a few days before beginning a new round of therapy.  It was just short of three months ago that he suffered the hideous crash that shattered his right leg, ruined his right elbow, and nearly severed his right hand.  It's still too early to tell if he'll ever be able to get behind the wheel again, but hey, he's walking and his hand is still attached... that's pretty amazing right there.

There's some serious discussion occurring amongst the teams about banning the movable rear wing, aka Drag Reduction System (DRS), for the Grand Prix of Monaco.  This actually makes a great deal of sense.  There really isn't a straight on the circuit worthy of the term, after all.  Further, the layout is so cramped that it's only just barely wide enough for two cars.  Considering that Monaco is pretty much nothing but slow, tight turns, DRS would seem to be flat-out dangerous.  I wonder if they're considering taking KERS out of the mix, too?

The organizers at Abu Dhabi are making some changes to the circuit prior to the race in November.  Amongst other things, they're combining the two left-hand turns 13 and 14 into one big sweeper, widening the chicane at Turns 5/6 so as to allow different lines through the curves, and they're changing the camber on Turn 9.  This is a big one as originally the camber ran opposite the way it should, i.e.,  the outside of the turn is lower than the inside.  Now Turn 9 is going to be much more of a traditional banked turn, allowing drivers to drive around the outside without losing grip.  Using my Crazy MS Paint Skillz, I've mocked up what the trackmap might look like. 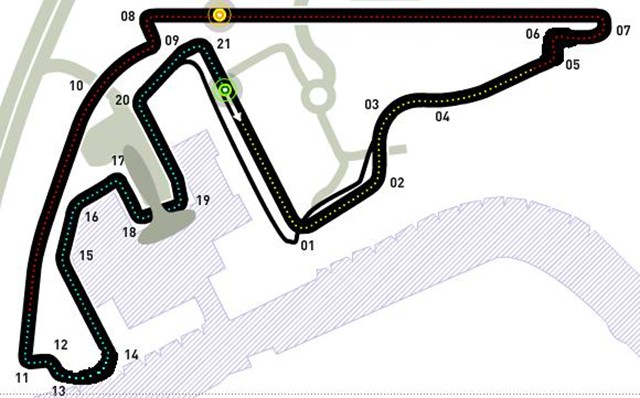 Okay, maybe not, but you get the gist.  Should give us a couple more passing areas, that.

Finally, Pirelli is telling us that if we thought the tire wear problems were bad now, just wait until we hit Turkey!  According to the manufacturer, the Istanbul Otodrom's surface is made out of 2-grit sandpaper and broken glass, and the tires will last even fewer laps than normal.  I guess that means the soft tires will last maybe six laps, the hards a dozen, and the super-soft tires would explode the moment the Pirelli trucks reach the paddock.