"Good Morning from Austin!  Time to throw open those eagerly waiting bedroom curtains and see exactly what this new Texas day has to offer." 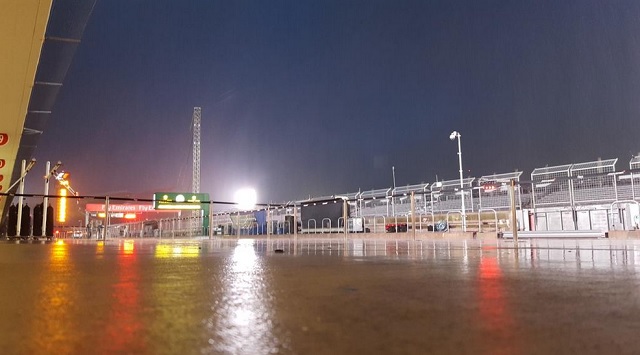 "Oh.  Plan B: Coffee and Palestrina."

Please note the picture was posted by COTA around 8am or so, not Matchett, but the point still remains: it's ugly out there.  It turns out that P3 actually began at 10am and NBCSN's coverage, which begins at 1130am, is on delay.  But it's somewhat amazing that P3 is running at all... all teams are required to run Full Wet tires and nothing else is allowed.  Meanwhile, Circuit of the America's Cup is not opening its gates until noon.  Why? 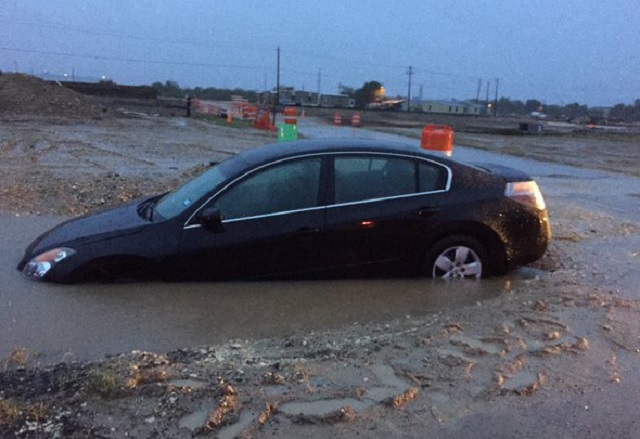 The weather continued apace last night, flooding is beginning to become widespread, and the storms are forecast to keep on keepin' on.  P3 is still going on, just without fans in the stands.  While that sounds weird, in a way it makes sense.  Consider: the FIA is responsible for the track and what occurs on it during a F1 weekend, but COTA is responsible for the circuit.  If the FIA needs to stop the running, they throw a red flag and everything is halted within two minutes or so as the last cars come into the pit lane... everybody safe.  If the same happens to COTA (lightning, for example), it's responsible for tens of thousands of people, and evacuating them to safety would be no small feat.

Avatar, I hope you didn't decide to attend the weekend.

Practice 3 and Quals coverage coming after it's over... or sooner, if weather causes something.

I can understand why they'd go to great lengths to get a practice round in: the drivers must have a chance to learn the track for safety reasons.

2 Well, they did!  They had P1 on Friday.  The hoops they had to go through for P3 was worth it though, if just for the events of the postponed Quals later.

3 And by that, I meant the Quals that were postponed, not the Sunday-Quals-To-Be.