F1 Quals: United States 2015 Liveblog Welcome to Sunday morning!  We don't do this very often, but the crappy weather the past coupel of days has moved Quals to this weird time and day... and it hasn't gotten much better, to be honest.  Let's start live-ish coverage!

Q1: Teams are under orders to use Full Wet tires and nothing else.  Which is good, because it's crap out there.  It's still raining, it's dark, it's wet, the spray is awful, and traction is less than optimal.  And oh boy! The folks on the pit wall are saying the first half of the session will be the GOOD weather.  It'll start getting worse after that... and we've got a Red Flag.

Carlos Sainz Jr lost it on the curbs at the start of the Esses (back where that other car is) and slid all the way into the TecPro barriers at the next turn... and it looked like he never slowed down in the process.  The session has restarted, but it's probably not going to matter... the rain is coming.

Okay, Q1 is over, and the rain never got worse.  Times actually improved, but that's all relative; it's hard to improve from 2:20.500, y'know?  That being said, wow, that was fun to watch.  The drivers had to have their hearts in their mouths, and the cars were slipping and sliding all over the place, but they were pushing hard because nobody knows if there'll be a Q2.    If there isn't, Daniel Ricciardo will be on pole, ahead of Hamilton, Rosberg and Kvyat: Red Bull Merc Merc Red Bull.

Q2:  Nope, we've got a Q2!  It's just started, it's still not looking great out there, and we're waiting for the next disaster.  Vettel kissed the wall late in Q1, but didn't appear to damage anything as he's on track right now. 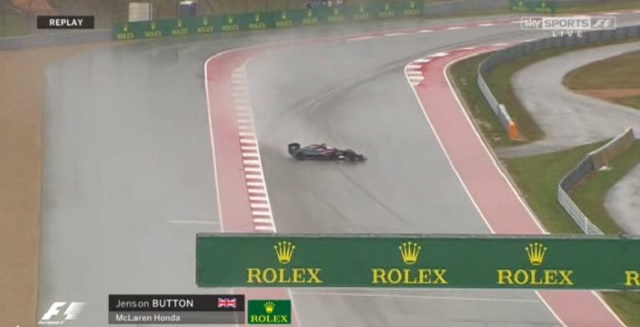 Turn 10 is going to kill someone.  It's off-camber downhill, and everybody is winding up sideways...  yeesh.  American Alexander Rossi just came up with the understatement of the weekend: "It was a little sketchy out there."

Kimi Raikkonen and Lewis Hamilton have both fallen victim to Turn 10 as well.  Raikkonen just called back to the pit wall "mrmrmmrmrr rm rmrmrmr rmrmrbrrlrl."  He didn't sound happy.

Kvyat just called in: "It's really dangerous out here."  I'm starting to think this is a bad idea.  So does Seb Vettel: "These are Red Flag conditions."

Q2 just ended... let's see if there's a Q3.  If not, Rosberg, Hamilton, Riccardio and Kvyat are your first four.

Heh from the Williams Twitter account: "By a show of hands, who hasn't had a moment at T10?"

Between sessions, Berndt Maylander is out on track in the Safety Car, checking conditions.

Q3: Q3 is being postponed for 10 minutes.  Here's the current standings: 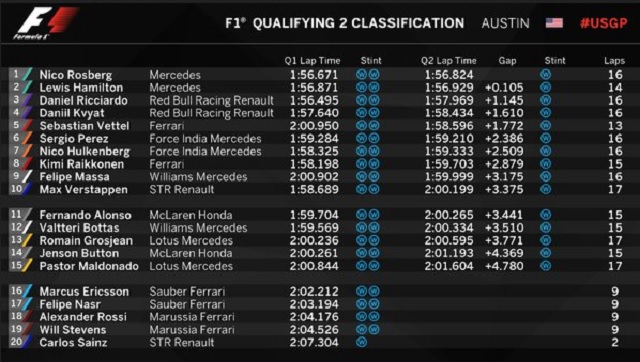 There was just a broadcast from Jenson Button earlier, saying in effect that it's dangerous and bad out there.

Q3 has been called.  There will be NO Q3.  Rosberg takes pole.  Vettel and Raikkonen are dropped 10 places due to engine changes, so the first six are Rosberg, Hamilton, Ricciardo, Kvyat, Perez and Hulkenberg!  Two FIs on the third row, hooray!

The race is this afternoon, see ya then!

One thing it does today is make this race not be another boring "Hamilton vanishes over the horizon" race.

2 One thing it does today is make this race not be another boring "Hamilton vanishes over the horizon" race.

Well, the weather is supposed to be better for the race, so we'll see!

Oh, what a great race! Just enough weather to mix things up without so much weather as to toss it into a cocked hat. First place trading hands because of passes, not pit stops. Great performances by several people!

And, by damn, it wasn't "Hamilton heads over the horizon"!!!

I look forward to your writeup!

4 Teams are under orders to use Full Wet tires and nothing else.

Do the teams have enough sets of full wet tires on hand for qualifying (and the race, if the conditions remain bad)?  Correct me if I'm wrong, but ISTR that the full wets are less durable than the usual slicks, or even the intermediates.  Also, the teams already used up some of their monsoon tires in practice (what little practice they got in).

5 It didn't turn out to be an issue. The rain pretty much stopped before the race proper and no one used wets at all. It was intermediates and softs the whole way.