F1 Quals: Spain 2011 Interesting strategies were on display today in the quals for the 2011 Grand Prix of Spain... very interesting indeed.  First, let's take a look at the provisional grid:


The streak is dead!  Mark Webber beat teammate Seb Vettel for pole position, the first time all season that Vettel isn't on pole.  The Driver's Champion may have had a problem with his KERS unit, which would account for the difference easily.

The "interesting strategies" I mentioned earlier were in Q3, when the McLarens and Red Bulls went out just as the session started, did one hot lap, then parked themselves in the pitlane.  Then... we waited.  And waited.  And waited some more.  Until the 2:00 mark, it was looking like nobody else would head out on track, content to preserve their tires and take their place on the grid from where they stood in Q2.  That just might have worked, truth be told.  Having said that, it's a horrible precedent; the whole point of the Knockout Qualifying format is to get cars out on the track, not to have them sit in the garage.  Something needs to be fixed, and quick.

You may note that Grizzly Nick Heidfeld has a big fat "no time" next to his name in Q1.  He never actually made it out on track, due to a little incident he had in Saturday morning's P3. 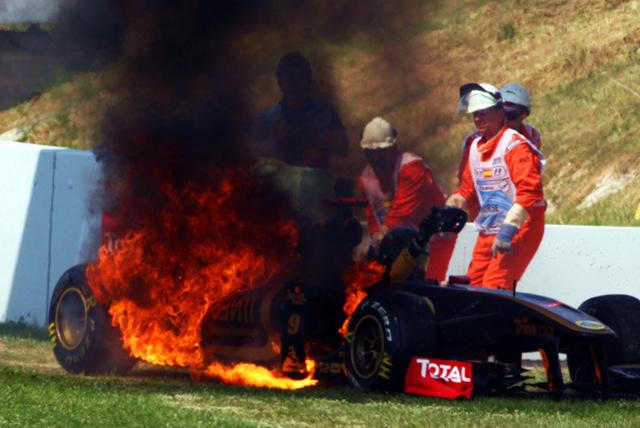 Renault says that there was a crack in the ducting that runs the exhaust to the front of the car, and that let 1000°F. gases flow into the sidepod.  As you can imagine, there's a lot of stuff in there that can burn.  Heidfeld escaped without injury, but the car was not so lucky.  However, this gives Grizzly Nick a chance to earn Driver of the Race tomorrow, just like Gandalf and Webber before him, both of whom started from waaaaaaay back, and both wound up ending up in the points.  Good luck, Griz!

The Renault Flambé allowed Heikki Kovaleinninninninnie to get his Lotus into Q2, the first time the "new" team has accomplished that feat.  Before one says "eh, it was just because Grizzly got a deal on marshmallows", however, please note that he beat out both Force Indias and Rubens Barrichello with his 15th place on the grid.  Not just a gimmie, this.

What is it with Finns and 15th place?  First it was Kimi Raikkonen taking his #15 Perky Jerky Toyota Tundra to 15th place in last night's NASCAR Camping World Truck Series race, and today it's Heikki getting 15th on the grid... I think there's something going on here.

Finally, if you're a betting person, you should drop a big wad of cash on Mark Webber to win on Sunday. You have to go back to 2000 to find a polesitter that didn't win, and 19 of the past 20 races have been won from the front row.  The lone exception was when Slappy Schumacher won a wet race in 1996... from third.  Of course, that was before DRS and KERS, but it still looks pretty favorable for Webber...

Race tomorrow, see you then!

2 Yes, but it's Webber-Vettel, not Vettel-Webber.  That'll make all the difference in the world!!!

Yeah, I know, but I'm trying to work up some enthusiasm for the race here, work with me.