F1 Quals: Russia 2015 If there was a race that's clearly cursed, it's the 2015 Grand Prix of Russia.  Why do I say that?  Practice 1 was badly affected when, ironically, a cleaning truck dumped a metric fsckton of diesel fuel on the circuit.  Even after the mess was dealt with, the track in the area was still slick.  Practice 2 started in a heavy rain, but just from Turn 12 to Turn 2.  The rest of the circuit was only slightly damp, which was absolutely the worst possible result as far as the teams were concerned... you can't learn anything with the track like that.  The slightly damp part was okay for slicks, but those would be suicide on the wet part.  Likewise, you could put full wets or inters on for the wet part, but they'd be chewed to hell on the dry.  So there was practically no running during Practice 2.  And today's Practice 3 was stopped at the halfway point after Carlos Sainz Jr had a heavy wreck.  He actually went under the TecPro barriers and caused serious damage to the backing steel barrier. 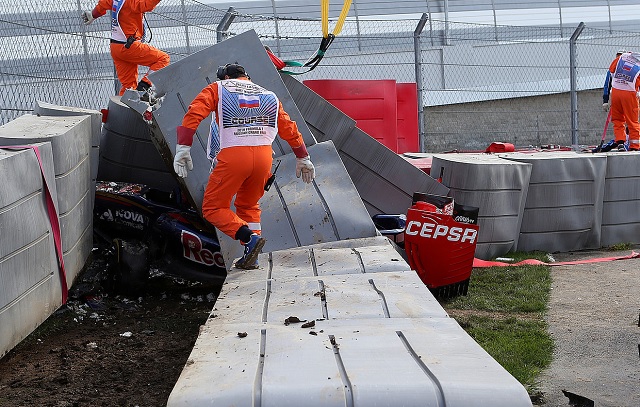 He was essentially unhurt, and is apparently campaigning the doctors to let him race on Sunday.  However, the required repairs to the steel barrier were so extensive that not only was Practice 3 stopped, but the following GP3 race was cancelled as well.  So did Quals go off without a hitch, or did the ghost of Stalin, unhappy with all the comingling with the western powers, reach up out of the tarmac and rip out the suspensions of the cars?  Here's the provisional grid for the 2015 Grand Prix of Russia:


Of course, only 19 cars qualified; Sainz's was too badly damaged to repair in the hour or so the team had.  Late reports from Sochi are that he's been medically cleared to race, by the way.  No doubt the Stewards will allow him to race.  Up at the top very little has changed.  Oh, it's Rosberg instead of Hamilton on pole, but that's really not a huge shock.  Bottas in the Williams shouldn't come as a surprise either: Mercedes engine, after all.  Nor should the Ferraris being where they are stun anybody by now.  Really, it's a bog-standard grid for a nightmare-plagued race.

In other news, Lettuce Grosjean was officially confirmed as the primary driver for Haas F1's inaugural season.  Great pickup for a rookie team: he's got six years experience, a handful of podiums, and has the greatest nickname I've ever come up with for a F1 driver.  Definitely no downside to him, except he'll probably be moved to Haas's technical partner, Ferrari, in a few years.  Still no word on who'll be in the second seat, except it seems very unlikely it'll be the long-rumored American driver.  Unless they somehow pull Rossi from Manor, that is... and I don't expect that to happen, worse luck.

Race in the morning, see you afterwards.