F1 Quals: Mexico 2018
I bet you thought I'd forgotten, didn't you?  I just bet you did.  Nope, I didn't!  And a good thing, too... we went from the best race of the season last weekend at Austin to the best Qualifying session of the season here in Mexico City!  Here's the track map: 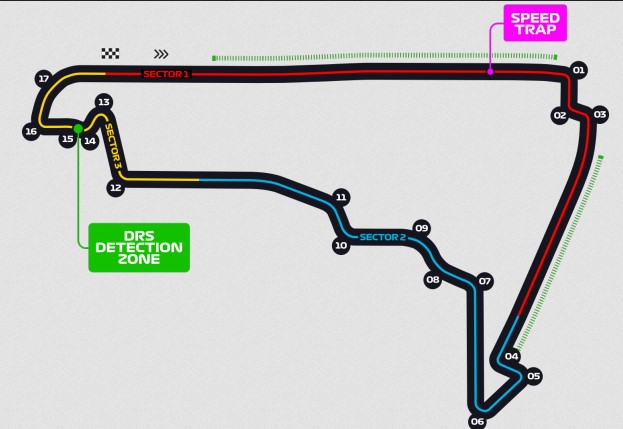 Two DRS zones, but only one detection zone.  I didn't notice that last year, or the year before, but it appears to have been the case.  Well, god help you if you've got a car closer than a second behind you when you hit Turn 15, because it'll be a good bit ahead of you by the time you reach Turn 04.  Cars were reaching 215mph or more down that long, long, long front straight today, and the announcers even said 230mph once, which I didn't believe.  So what was the result for Quals today?  Here's the provisional grid for the 2018 Grand Prix of Mexico:
It was all there for him.  DH Verstappen was on pole after the first runs in Q3, and it wasn't even close.  He was all set to break Seb Vettel's record as the youngest polesitter in F1 history.  The announcers were splooging all over the place with unrestrained glee.  To be fair, Verstappen had just turned in something of a Lap For The Ages, they all had reason to be excited... maybe not THAT excited, but excited.
And then something funny happened... they ran the rest of Q3.  I know, what a stunning development, who woulda thought?  If Verstappen's lap was one for the record books, and in fact it was the fastest lap around the Mexico City circuit ever, Smiley Ricciardo's final hot lap in Q3 was something for a new record book altogether.  Somehow he managed to knock SIX TENTHS OF A SECOND off his lap time... and oh by the way, he took Verstappen's pole away in the process.  You know how the FIA producer usually gets the radio call from the pit wall to the driver telling him he had pole, and the driver would respond with usually restrained happiness?  Not this time.  We didn't even need the producer piping the sound in, I could hear Smiley's scream of joy up here in Duckford... some sort of weird acoustic trick caused by the Grand Canyon, I gather.  The tone in Verstappen's voice was chilly when David Coulthard's Chin asked him about missing out on the record when it looked so very like it would be his.
Other than all that and the Mercedes/Ferrari battle, which looked so... boring... today, qualifying was pretty much the usual sort of thing.  Oh, it's certainly surprising that neither Haas made it out of Q1, and yes, it's very surprising that Red Bull locked out Row 1, but... well.  The Red Bulls were something like 7 or 8 mph down vs the Mercs through the speed trap, but they made up the time lost and more on the twistybits.  IF the two of them can avoid killing each other off the start, there's a chance they'll be able to keep Hamilton, et al, behind them into Turn 1.  If that happens, well, who knows?  But if the faster cars get by, it'll just be another ho-hum finish for the Austrian team.  I can easily imagine seeing cars four abreast into the braking zone for Turn 1 after the start.
Hamilton doesn't need to take chances, of course.  Sure, he'd very much like to win... but to win the driver's championship, all he has to do is finish 7th or better and it won't matter what Vettel does.  In any case, Vettel needs to win out, and I just don't see that happening right now.
Race is in the afternoon sometime... I'm confused as to when, as Mexico ends Daylight Savings Time at 2am Sunday morning... check your local listing for times in your area.  And we'll see you afterwards!

1 I'm predicting a very interesting first few seconds of the race, some bits of cars strewn about, and then a processional.

But I'm absolutely crap at predicting things, so!

2 I have friends that were there for this. So cool.