F1 Quals: Malaysia 2015 Allegedly they've heard of sunlight at Sepang.  If you just went by today, however, there's no way that's actually possible, as the session began with low, heavy clouds.  If I saw clouds like that here at Pond Central on a Summer day, I'd be heading for the laundry room as fast as I could go.  But did it actually rain?  Here's the provisional grid for the 2015 Grand Prix of Malaysia:


First things first: the 107% time was 1:46:217.  Neither Manor driver brought his vehicle in under that time, so they race at the Steward's permission... which was granted, as both drivers managed to display enough pace during practice to claim they manage it.  Assuming Manor can find and fix the gremlin that infected Will Stevens' car between Practice 3 and Quals, we should have a full grid on Sunday!

And what an interesting grid it is, too.  Of course it rained in Malaysia; it always does.  The teams had enough time for one or two flying laps before the heavens opened up and dumped a substantial portion of the Malacca Strait onto Sepang International Circuit.  Lewis Hamilton was nearly caught by this, as he had problems getting his Mercedes started.  Because most only got one shot, one bad twitch could cost you the session, as Kimi Raikkonen learned.  After the dry laps were in the books, there was no point in going out again. 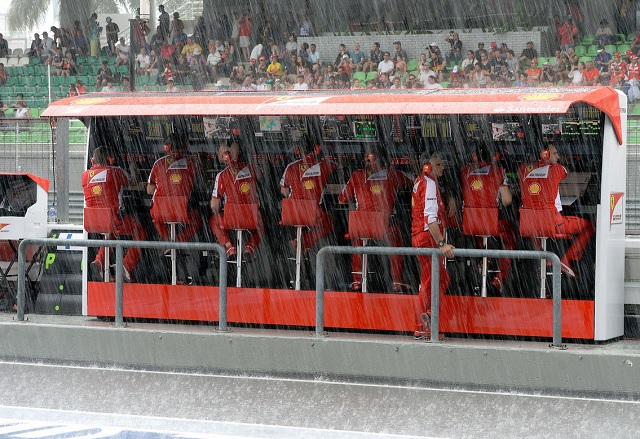 Q3 was delayed nearly 40 minutes as the Powers That Be waited for the water to stop bucketing down.  This it duly did, but the track was still sodden enough for Intermediate tires (and some thought Full Wets) to be required for the entire session.  In the process, we may have discovered that, at least in the wet, Ferrari can hang with the Mercs.  In the dry, the Silver Arrows still have the clear advantage, though it seems to have been cut somewhat.

We'll see what the race will bring us early Sunday Morning.  No idea when I'll manage the writeup, as I've a couple of other things that need to be dealt with on Sunday.

1 I was stunned to see something other than a Mercedes in the second spot when I looked at the table there.

How the mighty have fallen: McLaren came 17 and 18?

I remember a time when McLaren was a contender... ah, that seems like such a long time ago.

3 Why the laundry room?

4 I don't know why they bother with that 107% rule; every time someone has failed it, the stewards grant them an exception so they can race anyway.

5 Why the laundry room?

It's underground, Vauc, with lots of piping to help carry the loads.  In effect, it's the closest thing that I've got to a basement here.

I don't know why they bother with that 107% rule

That's not entirely true.  I believe there have been four times since 2011 that cars have been booted under the rule.  Every time, it was HRT, as a matter of fact.  I'm of the opinion that they're being kind to Manor right now, in effect giving them testing time instead of preventing them from going out.