The entirety of Q1 was run in the dry, but just as some of the survivors made their way to the track for Q2, it began to rain.  Inters were the tire of the moment, with everybody thinking they'd have time for one flying lap on the faster of the wet-weather tires before it got too soggy for them. 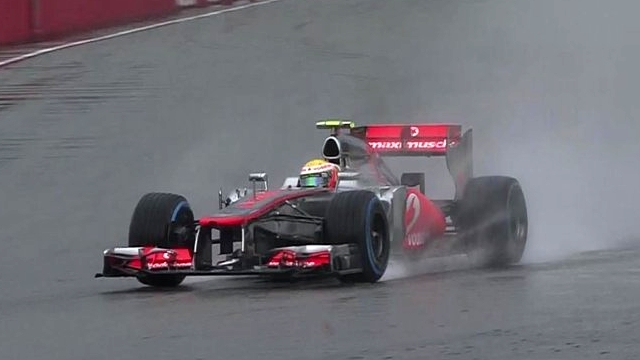 They were wrong.  By the time the cars had finished their out-laps and begun their flying laps, the circuit had just crossed the line between Inters and Full Wets... you could still use the Intermediate tires, but the water-pumping abilities of the bigger galoshes were probably the better bet.  The drivers were game, certainly, and struggled to guide their cars around the track on the less-effective tires, but times were... lackluster at best.  Amazingly, nobody managed to end up in the kittylitter or the safety barriers, but only by the greatest of good luck.  Once everybody was on the Full Wets, the rain got even heavier.  It wasn't quite "grumpy old man building a boat in the pit lane" wet, but pretty bad.

Q3 was even worse, with the heavy rain of Q2 mixed with pooling and rivers running cross-track.  At the beginning of the session, HWMNBN was on the radio suggesting that there was too much water for safety and there should be a delay.  Denied, he went out and gained pole by being one of the very last drivers to set a flying lap as the session headed towards an end.  By that time there was a... let's call it less-wet... line on the circuit.  The Ferrari driver took advantage, gaining another pole despite Red Bull's Sebby Vettel getting one final shot at his time.  A quick off-track excursion ended that threat and solidified HWMNBN's pole.

The race tomorrow is supposed to be run in the dry.  We'll see... and F1 Update! will be all over it.  See you then!

1 That time chart is remarkable. HWMNBN was 24 seconds slower in Q3 than in Q1!

2 Basically, it's the difference between the 100m dash and the 100m freestyle... which, considering the amount of water on the circuit, seems particularly appropriate.