F1 Quals: Germany 2008! Something weird happened in Q3 today: Kimi Raikkonen gave up on a qual lap after grabbing P2.  2nd sounds pretty good, no?  The problem was, there were still a bunch of other cars on track in the middle of hot laps.  The result?  Well, let's look at the provisional grid:


Yep, that's right.  From the 1st row to 3rd in just a few seconds.  Reports indicate that Ferrari just can't get the car dialed in when there's more than a little bit of fuel in it.  That's just not good, and it's going to be a loooooong night for the boys from Maranello.

In other surprises, Jarno Trulli jumped from P10 to P4 on his last run, seemingly from out of nowhere.  He didn't show ANY signs of that happening this session, so one must wonder just how much fuel he's got in the Toyota.  The other big surprise is Sebastian Vettel's Toro Rosso making it into Q3.  Very unexpected, though he's been quick all weekend.  He's making Red Bull's decision to give him David Coulthard's Chin's seat in the Big Team next year look good.

Kubica was 14th at the end of Q1; both BMW-Saubers are having problems recently, and there's no obvious reason why.  Well, we'll see what happens.

The weather forecast is still a coinflip for race day.  About the only thing the forecasters are sure of is that it won't snow.  They think.

Interestingly, McLaren is running asymmetric radiator side vents this race.  I'll try to get a screenshot of it tomorrow.  See ya after the race!

UPDATE: The good folks at F1technical.net made a nice composite pic of the vents: 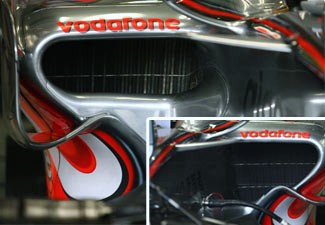 In case you're wondering, it's to cut down on drag.  Normally, they wouldn't be able to get away with this, because the engine needs to be cooled and the air getting into the vents are the only cooling they can get.  Cutting down on the size of the vents means the engine is going to be running warm, except for one thing: it's been a cool weekend at Hockenheim.  Apparently, they first ran the this during Silverstone testing; again, a cool weather track.  No way they could try this at, say, Bahrain.

1 Good to see that my favorite Pole is still a threat.