F1 Quals: China 2016 Practice 3 in China was stupidly wet, with heavy rain lasting through the first 15 minutes.  By the time Quals rolled around, the track was... mostly dry.  There were still some damp spots, though.  Would they have any role to play?  Let's take a look at the provisional grid for the 2016 Grand Prix of China:


On first glance, you might think that Lewis Hamilton was affected by the rain, but you'd be wrong.  He went out for a trial lap on Intermediates, but came right back in complaining of his engine being down on power.  I mean, every driver complains that their engine isn't powerful enough, but this time it was real: a second attempt at a lap later in the session was also a failure as his energy recovery system wasn't working right.  Since he didn't set a time, he technically races at the whims of the stewards.  No worries there, I'd say.

Manor's Turbo Pascal Wehrlein also races at the allowance of the stewards as he wrecked his car just a couple of minutes into Q1... and this is the only time that the wetness of the circuit may have had an effect. 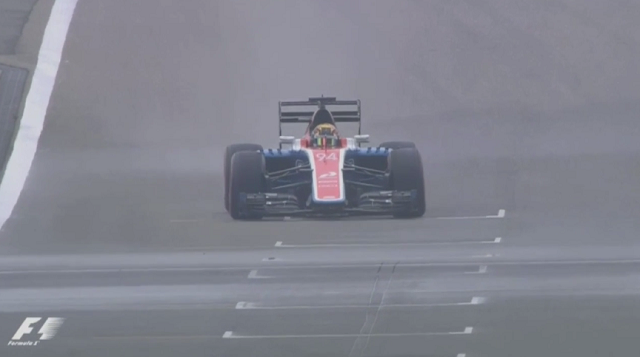 As you can see, there's two damp strips across the asphalt, separated (and caused) by a bump in the front straight that runs the width of the track.  Wehrlein splashed through the first damp patch, hit the bump, then nailed the second damp patch... and ended up having a tankslapper that dumped him into the outside wall.  You'll note his DRS is open, as well... the combination of water, bump, and reduced downforce ended his day.  A 20 minute red flag while the track workers recovered his car was the result.

Q2 ended early when Force India sent Nico Hulkenberg out for his final hot lap with a tire poorly attached.  He gave it the old college try, but making it all the way around the track without losing the thing proved to be too much.

Oh dear.
This, too, brought out a red flag.  The clock was stopped with about 90 seconds left in the session... nowhere near enough time to get out from the pits, get around the track, and start a flying lap.  Thus were Felipe Not Nasr Massa, Jenson Button and Fernando Alonso, all of whom were on or were about to start a flying lap when the flag came out, relegated to not making it to Q3.  Alonso was particularly annoyed by this, making sounds on the radio that were... um... interesting.

The final session saw a surprise finish when Smiley Ricciardo cranked out a lap from out of nowhere.  Both Ferraris had a great shot at beating him, but both Vettel and Raikkonen screwed up the final hairpin, meaning they could not better the Aussie.  Which left Nico Rosberg up on top of the grid, and his biggest rival at the very far end.

That promises fireworks.  See ya Sunday!

1 Hamilton seems to be having a lot of bad luck this year. Is Rosberg secretly sticking pins in a Hamilton doll?

2 is that tire tethered?

3 Vauc, it is.  Unfortunately, the tethers go to the wheel upright, which is part of the wheel assembly.  The wheel rim, which the tire is on, attaches to the assembly... ere they wouldn't be able to change tires!

The tethers are there to keep things from flying away during an accident, and they do a great job of it except in the very worst of wrecks.  They can't be expected to protect against mechanic failure.

Unfortunately, if a tire comes loose without puncturing when the car is moving fast, it will bounce and stay upright, and it can travel a ridiculously long way before stopping unless it hits something -- or someone. Loose tires like that have been known to kill people.

But as the duck says, you can't put a tether on the tire itself because pitstops would take a couple of minutes if not even longer. Besides, where would you attach it?

5 Loose tires like that have been known to kill people.

In 1998, when tethers were first introduced, the regs called for one per wheel.  In 2000, a wheel getting free killed a track worker at Monza, so the regs were changed for 2001.  Since then, two tethers per wheel have been required in F1.

You just have to hope that the team can actually fasten the tire nut.

7 As I type this, I have not yet watched Avatar's video.  I am making a prediction right now: it's the V8 Supercar incident where the tire comes off, rolls forever, passes through race traffic, bounced on a curb and ends up stacked perfectly on top of a free-standing tire barrier... and the announcer says something to the effect of "...that's why it's called a control tire."

8 I have now watched the video.  Yup, nailed it.

I've actually posted that viddy here before, along with other "favorite car tricks."