F1 Quals: Belgium 2012 It doesn't need to rain for rain to affect results.  For example, with both Friday practices washed out, the teams were desperate for data to work with in preparation for today's bright and sunny Quals session.  The result was... well, predictably unpredictable.  Let's take a look at the provisional grid for the 2012 Grand Prix of Belgium:


There are moments in time that are just completely mind-blowing.  This isn't one of those moments, but it was quite surprising to discover that this is Jenson Button's first pole in 61 races.  That's Monaco 2009, if you're counting... the year he won his Driver's Championship with BrawnGP.  The person joining him on the front row, Gandalf Kobayashi, has a couple of bullet points today: it's his first time on the front row, and he equals the best qualifying position for a Japanese driver in F1 history.

Then there's Akhoond Maldonado starting third... except he's not.  He was handed a three-spot grid penalty for impeding Nico Hulkenberg in Q1.  That promotes pre-Quals favorite Kimi Raikkonen to third place.  The buzz up and down the pit lane is that Lotus is ready to win, and more importantly, is able to do so.  Sergio Perez will start right behind his Sauber teammate; that's got to be the best result the team has had since BMW left... and perhaps the best they've had in my viewing history?

Clearly the second biggest surprise on the day must be Seb Vettel in 11th after getting the boot in Q2.  He didn't miss by much, but he did miss, which is essentially unheard of.  Again, not completely mind-blowing, but surprising indeed.  A welcome one, truth be told.

Mark Webber and Nico Rosberg both get five-spot penalties for gearbox changes.

The excuse that "nobody had data" to explain Sauber's performance, or Vettel's absence, or Kimi's location on the grid, is a little shady.  Sauber and Lotus have both been really quite good over the past few races, and it was just a matter of time for them to burst out.  The surprise may be that it's taken so long.

As to who's going to win on Sunday?  Button or Raikkonen must be the favorites... Jenson because he's the polesitter, and Kimi because, well, if he finishes at Spa, he wins.  He's had four finishes here, and he's won all four of them.  If I had to bet?  I'd go Kimi... but I'd find another bookie and put money on Button, too.  I'd also do a flyer on the Saubers, just because. 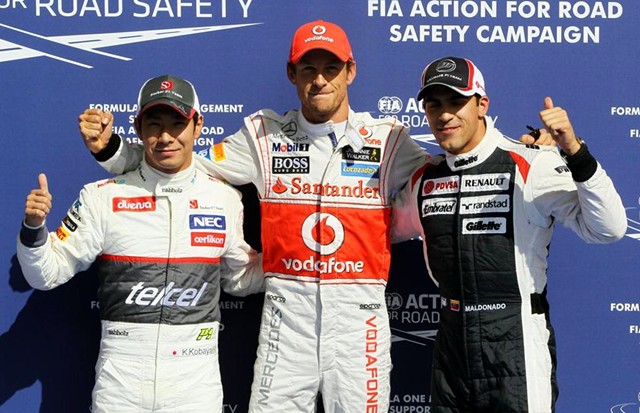 That's not the most unlikely top three I could imagine, but it's awfully close.

1 A welcome surprise, Vettel missing Q3?  Someone has to give Alonso a run for the championship.  Kimi would be my first choice, but I'd take Vettel too.  Also, he missed Q3 in China too.