That's the only way to describe the new qualifying format, unless you want to use words like debacle, awful, failure, or what were they thinking?.  Before we get into why Quals was an unmitigated catastrophe, let's take a look at the provisional grid for the 2016 Grand Prix of Australia:


Pretty standard results, more or less.  That Toro Rosso got both of their cars ahead of Red Bull is an interesting twist, but part of that performance has to be credited to Embryo Verstappen, who might be turning into a very skilled driver indeed.  The McLarens showed signs that last year's nightmare is over by actually looking like they deserved to be on the track.

But let's get to the efalump in the room: the new quals elimination format.  It was supposed to make things more exciting, but the exact opposite occurred.  You saw a great rush at the beginning of each session as everybody went out to set a lap time before the elimination timer began ticking down... and then the Mercs and Ferraris, secure in their speeds, disappeared.  It appeared that the teams had some confusion about how the new format worked, too... when the 90-second timer reached zero, whatever car was slowest was eliminated, even if they were on a flying lap.  Previously, when clocks ran out (such as at the end of the session), flying laps counted.  This means that timing is everything now... for example, a lap of Australia takes around 1:26 or so.  Basically if you're not on your lap or about to start one when that 90 second timer begins, you're out of luck.  That's what doomed Kid Kvyat, who was in the pit lane when the timer started on him.  The two Haas cars were also badly hurt by this: Esteban! was on a serious flyer when his time ran out; his time would have bumped him up to eighth on the timesheet, plenty good enough to advance.  Lettuce Grosjean was going even faster for the first two track sectors when the clock struck ":00" on him, much quicker that his teammate.  He decided not to finish the lap at that point.

However, if you're the last one to be under the clock in a session, your final hot lap counts even if time runs out, just like before.  Renault's Jolyon Palmer snuck his way into Q2 that way, relegating the Sauber of Sony Ericsson in the process (and causing confusion and annoyance up and down Pond Central).  Q2 went down much the same way. 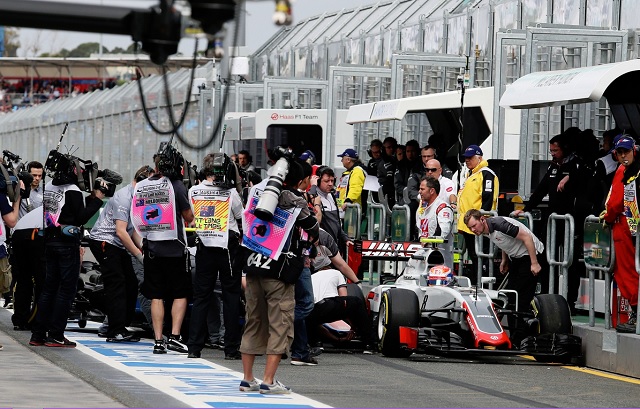 All of that was just prelude to the ridiculousness that was Q3.  Basically, the eight cars that advanced to Q3 went out for one lap each, returned to the pits, and for all intents and purposes the session was over; the clock just hadn't run out yet.  Oh, Nico Rosberg moved himself from fourth to second later, but there was nothing going on for the last five or six minutes.  Hamilton busied himself sitting atop of the medical car, fans busied themselves thinking "WTF is going on?" and critics everywhere broke keyboards as they rushed to post scathing diatribes about the new format.

And they've got the right of it.  Drivers, team principals, even Bernie Ecclestone have all come out calling the format "rubbish" and saying that F1 needs to go back to the knockout format again.  At least then you usually had the drama of people being on track at the end of Q3.

Race late tonight... I'm unsure if I'll be able to stay awake for it, however: I coudn't manage the trick for Quals.  We'll see what happens, F1U! tomorrow. 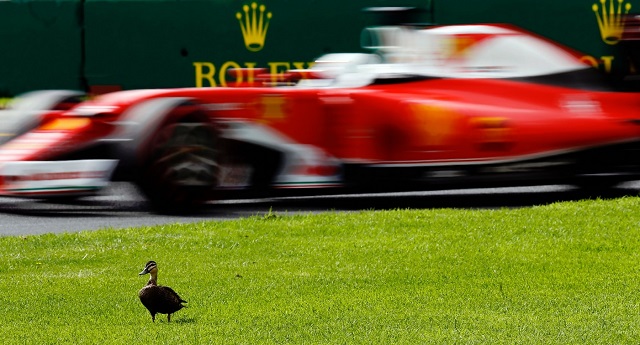 Ducks always get the best seats.
click for bigger

It was supposed to make things more exciting, but the exact opposite occurred. You saw a great rush at the beginning of each session as everybody went out to set a lap time before the elimination timer began ticking down... and then the Mercs and Ferraris, secure in their speeds, disappeared.

That's exactly what I thought would happen.

2 It's also really interesting that most of the teams had their cars come in next to one another on the grid. Was that partly because of the new qual format?

3 I'm seeing on Twitter that the elimination qualifying format has been axed for the next race.  So thankfully that's over.

4 I expected "underwhelming," rather than "catastrophic." Wowza, was that pooch thoroughly screwed or what?