F1 Practice: Monaco 2014 Rain.  Rain is the great equalizer in Formula 1.  Rain takes traction levels and sends them plummeting into the abyss.  Cars with great grip become merely average, and cars with lousy grip become potential race winners... they're not affected as much.  Rain makes any race better, and the right amount of rain can make any race a classic.  Rain is always welcome. 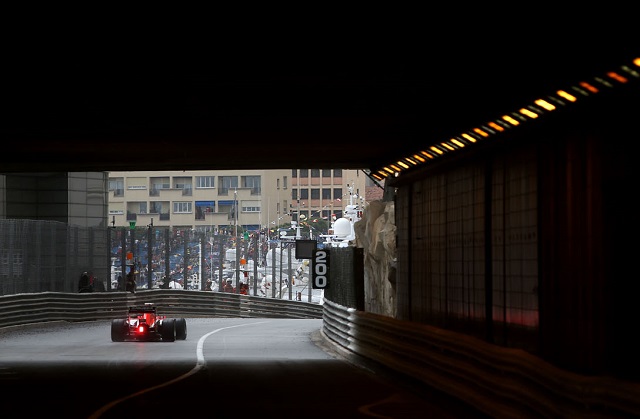 Except this is Monaco, it's Thursday, and the rain hit just before Practice #2 got started.  For the first half-hour, nary an engine was cranked nor a tire turned.  Why?  Because up until then, all a team could discover about their cars would be how fast it could be turned to scrap.  Monaco is something of a low-grip circuit at the best of times, the rain made that even worse... then throw in the 2014 high-torque-low-downforce cars that are twitchy anyway?  There isn't enough carbon fiber in the world. 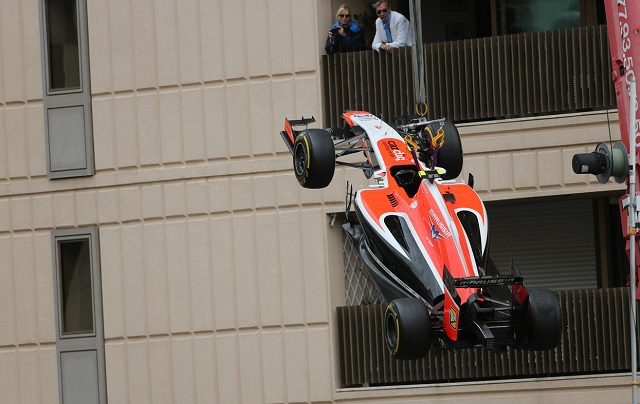 Eventually we did have cars on track, running awkwardly careful laps on Intermediate tires that were just barely capable of coping with the amount of water.  It wasn't until about five minutes left in the session that teams started to bolt on the super-soft tires and let the drivers loose.  Even then, we had squirmy slidy squirmyness all over the place.  Even the man who wound up on top of the timesheet, HWMNBN, looked like his Ferrari was this close to trying to sneak into the casino without paying.  Then everybody packed it in, breathed a sigh of relief, and got ready to take Friday off. 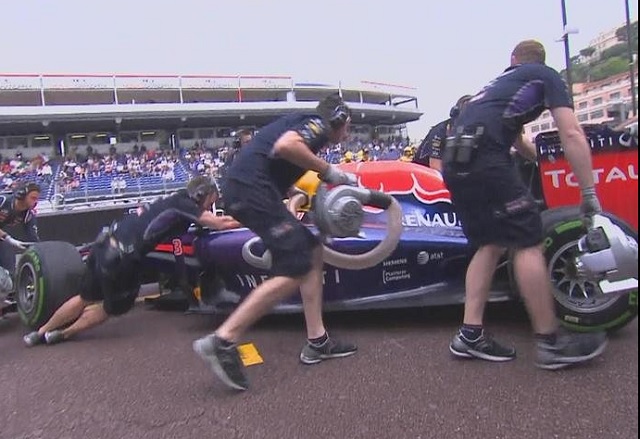 HAHAHAHAHAHAHAHAHA!  No.  There may not be any scheduled activities on Friday, but rest assured that the teams will be busy working on the cars.  Anything they can do to make the run for pole that much easier, they will.  We'll see which ones are successful on Saturday... come back then to find out!

1 Who's the pilot of that orange aircraft?

2 That's Max Chilton's Marussia going on a flying lap, Steven.  He spun and couldn't get the car back in gear.  This being Monaco, it's not like there's a whole slew of run-off area, so they had to crane the car away.

3 Oh, I didn't see the cable. I thought he had lofted himself.

4 Neither did I.  I thought that was a shot from a VERY exciting moment....

(Especially coupled with the line about sneaking into the casino)

5 I kept looking for the driver and was thinking he was blending in with the cockpit very well.  I think we look at the picture expecting a crash shot, so the crane line got processed as background.

7 Found my answer here.  Thank you for your writeups.  Reading their article hurt.

8 I didn't notice the crane either until it was pointed out.
You would think a tow truck would be easier than a crane.  This guy has even been on the circuit.

9 They have to use a crane to lift the car over the barriers.

10 CAN you tow a F1 car? The noses come off. The front suspension's not exactly set up for that kind of stress either.

11 On the occasions that they have to tow a F1 car, the marshals hook a tow line to the airbox.  Usually, though, they plop it on a flatbed truck.

12 When I first glanced at that picture of an airborne race car, I thought that perhaps Formula One had finally gotten interesting.  You know, like those old Speed Racer cartoons...