F1 Practice: Malaysia 2013 Hello, howdy and welcome to Malaysia's Sepang International Race Circuit, where it is currently hot, humid, about to rain, and...

OMGWTFBBQ!!!  IT'S THE VARSHA!!!  HE'S BACK!!!!1!11!!!  Okay, he's filling in for Leigh Diffey, who's calling the IndyCar season opener this weekend, but THE VARSHA IS BACK!  SQUEEEEEEEEEEEEE!!! We've got the entire Legendary Announce Team together again for the first time!

Everybody's terribly concerned about the tire situation for the race.  Pirelli has brought the hard and medium compounds to the track, and from all reports the hards aren't lasting more than a handful of laps on the hot, hot asphalt.  They rubber is just blistering and boiling off.  One would assume that means the mediums will explode into flame the moment they hit the first turn, but as it turns out, they didn't wear quite as badly as the hards.  No, I can't explain it either.

Esteban Gutierrez had a little problem with his Sauber: the fire extinguisher built into the car went off.  While he was driving it. 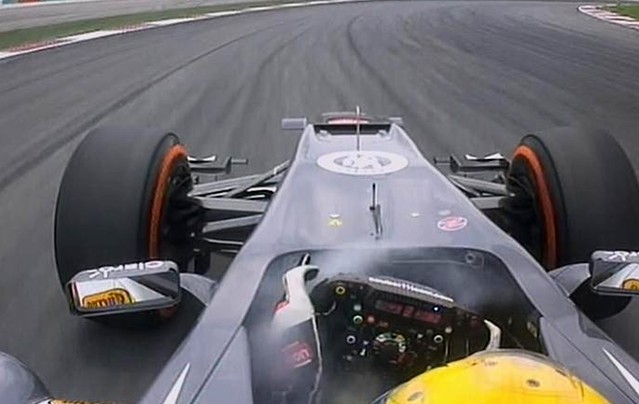 I can imagine this would be... disconcerting.  And, considering that the temperature and humidity were both in the 90s, perhaps refreshing as well.

And then it rained, and everybody stopped driving.  Mark Webber actually said that the slicks worked better on the wet track than they did in the dry.  That's Australian humor, I suppose.

I've half-arsed this post.  Sorry about that.  Quals in the morning.