F1 Practice: Great Britain 2012 It doesn't always rain at Silverstone on F1 weekend.  But when it does... hoo-hah!  During today's two practice sessions, it was, it must be admitted, somewhat damp.  How damp? 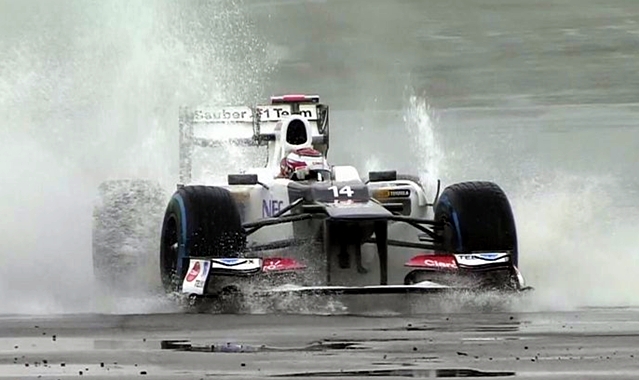 Yes, about that like that.  For pretty much the entire first session, and for most of the second, the rain was coming down like the dickens.  When cars did attempt to get out on track, it usually ended up in... what's the word? 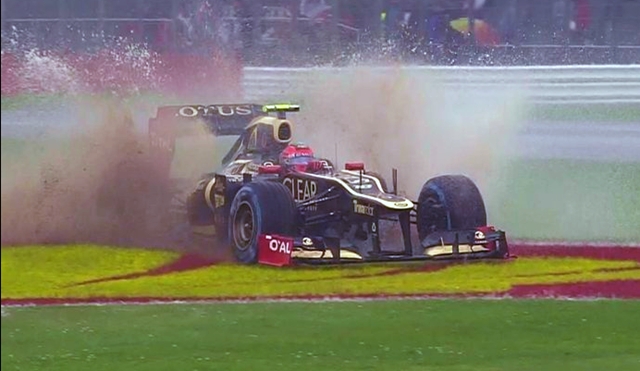 Tears, that's it!  It ended up in tears.  It wasn't until the last half-hour of P2 that the rain backed down enough to go out with any realistic chance to get workable data.  Even then, it was still wet enough to claim the Williams of Bruno Senna, who managed to bend both ends of the car in the same wreck.  So with very little happening on track, let's go over some news from the F1 world!

First up, Maria De Villota's condition has been upgraded!  It's now "serious, but stable."  She went through another round of surgeries on her head and facial injuries today, the second batch.  More information is coming out as to just exactly what happened; it appears that the truck's lift gate was down, and she hit it head-on.  Even a helmet couldn't be much protection in that situation... she's seriously lucky she's alive.

Second, how much rain are they expecting this weekend at Silverstone?  The track is actually telling fans not to attend the Quals session!  At least, those fans without reserved parking or taking the ticket-only Park'n'Ride, or those camping at the track.  Half of the parking lots at the circuit, grass fields mainly, are either under water or turned into swampy bogland.  Oh, and the weather is also affecting the access routes to Silverstone... many people completely missed the day's practice sessions, stuck on the highway in a massive traffic jam.

Finally, here's a cool video I found a few days ago:

Quals Saturday morning; see ya then!

1 So that's where the She music landed in your ears from.

2 Hi Wonderduck.  The problem with long, image-filled posts getting cut off at the bottom unless you reload - you know, that problem - should be fixed.  I've tried it on all the major browsers, but I can't say for older versions, so let me know if you still see it.

I dunno if the problem is fixed, but he's a god anyway!

Looks good to me!

5 (But not until after I dumped my browser cache!)

If it's working now, that's good, let me know if you see the problem arise again and I'll use a bigger hammer.

Before I dumped my browser cache, the page loaded and ended halfway through the comment box.

After I dumped my browser cache, it loaded and displayed all the way down to the "post" button.