F1 Practice: Australia 2011 It's been a long wait, but F1 cars have finally returned to the track to begin the 2011 season!  I think we can officially say "Yay!" now.

It's looking like the biggest factor in Sunday's race may not be the cars, nor the drivers, but the tires.  Both the Powers That Be in F1 and the teams asked new tire manufacturer Pirelli to create a larger difference in tire wear between compounds of rubber.  This shortens the life of the tire, making for more pit stops.  Well, be careful what you ask for, because Pirelli has come through in spades.   Using the soft tires as an example, reports are that it wears in a predictable fashion... until it completely drops off the table at a completely unpredictable point.  Once it does that, the tire is totally worthless.  You might get 10 or 12 laps of performance out of the rubber, but that's it.  Last year, you'd go for 12 laps, then if you took care of your tires, get another 20 laps of decent performance out of them.  Not now... now when the tires go off, a car can expect to lose five or six seconds per lap or even more.  If you're lucky, the tire hits that point when you're near the pit-in.  If you're not....  Even better, and I say that completely unsarcastically, the boffins on the pit wall won't be able to tell the drivers when that fail point is coming.  The driver will have to feel it themselves, and make the call on the fly.  THAT's good for the sport.

What isn't so good is that the new Pirellis appear to be somewhat fragile.  I don't mean in the way it wears, but in the base construction of the tire altogether.  Take a look at this: 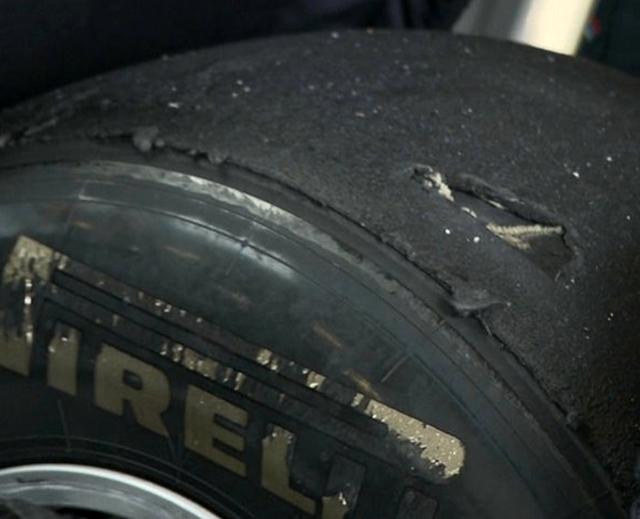 This tire was the front-left of Seb Vettel's Red Bull.  All he did was run over a curb and it ripped a big chunk off the surface, revealing the canvas backing underneath.  Before you say something like "this must be an isolated case," one of the Virgin drivers had the same problem... on the back-right, and he didn't run over anything.  They're saying that these things shed rubber like a longhaired cat sheds fur in the summertime.  Something to watch for, that.

Speaking of Virgin, they and HRT seem to be in serious jeopardy of not qualifying for the race due to the return of the 107% rule.  Virgin was setting times fourteen seconds off the pace of the leaders.  HRT didn't get a car on track until there was around 1m45s left in the 90 minute second practice session.  They were too busy putting the car together in the garage and getting it into running shape to even hope to get a timed lap in.  They weren't even thinking about getting the second car into Practice 2, and everybody in the garage, from team principal Colin Kolles to the guy who sweeps up, looked exhausted.  According to SPEED's pit-lane reporter, the mechanics had been working on the car around the clock since Tuesday, and by the looks on the faces of the team members, he wasn't exaggerating.  I suspect that we'll be looking at a 20-car race on Sunday, maybe 22.  We almost certainly won't be seeing HRT.

Presumably the mediums and hards will last longer than the softs. So what is the advantage of the softs? I assume they are faster on the track, right?

But will they be enough faster to compensate for an increased number of pit stops?

2 The softer the tire the faster it is, but the less durable.  Cars were running both the soft and the hard compounds today in practice, and at no time did I see the performance jump you'd expect from putting on the soft shoes.

Now it could be that, let's say Toro Rosso, put on the soft tires AND filled the gas tank to the brim, trying to figure out the wear rate of that combination.  Soft tire + full tank = slower than I expected.  Or it could be that it's just not that much faster than the hards.  When Bridgestone was in charge, we knew what the tires would do because we'd already seen every combination of variables you could think of.  With the Pirellis, we're flying blind.

It looks like everybody will be making three stops... at least, right now it does.  There's every chance in the world that someone will discover how to make these fragile things last 40 laps or something... that's the way F1 works.  We won't find that out until the race.

4 The tire factor is going to make the first few races very interesting. I wouldn't be surprised if we see a few pit-lane errors as drivers decide their tires are done and come in to the pits with no warning or knowledge that their teammate is already in the box. Hopefully the tires have enough life in them that the teams can come up with strategies that will keep the drivers nicely separated, but that is harder than it used to be with no refueling.

it was nice to see Slappy up in the times and leading the session for a while. I'm not going to be rooting for him to win another championship, but it was painful to see a seven times WDC that far back in the pack last year.