F1 on TV: United States 2014 After a couple of weeks, the F1 Circus has made its way from Sochi on the Black Sea to Austin deep in the heart of Texas.  Along the way, however, two of the teams have gotten lost... more on that later... but for now, we've got the United States Grand Prix!  Let's take a look at the track map. 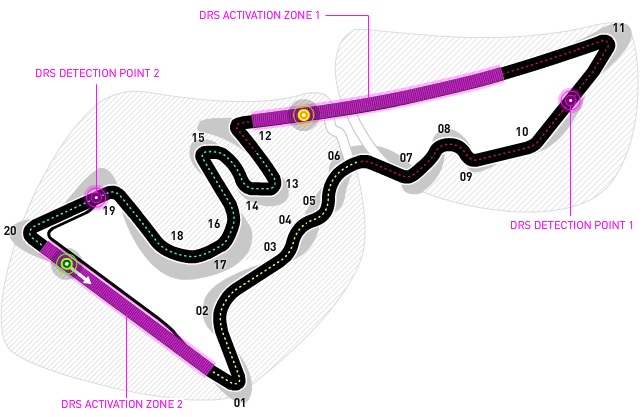 The Circuit of the Americas has proven to be something of a mixed bag in the two previous races.  The drivers universally love the track, but the races themselves have been a bit less than special.  The circuit itself, much like the English language, has merrily stalked other tracks down back alleys and mugged them for the best bits.  The Turn 03 thru 06 Complex is highly similar to the "Esses" at Japan, for example.  The big arching turn of 16-18, unfortunately known as "Diabolica", is reminiscent of Turkey's Quad-8.  Turn 11 is almost-not-quite similar to Montreal's hairpin.  But then you get the parts that are All-American!  The uphill Turn 01, amusingly known as "Phil Hill", with its steep climb to a blind apex leading to a dropaway to the quick Turn 02, is like nothing else on the calendar.  The long back straight actually has a blind crest roughly where the DRS zone begins, and of course it isn't entirely straight.  The most difficult turn on the track is 19, a slippery, tight right-angled bend after the high speed Diabolica.  It's not easy to get whoa'd up to make the turn without killing a tire or going for a gallop out on the Pecos.  It's a enjoyable circuit, no doubt!  We've just not had good racing on it yet, but I know that's not universal.  A few weeks ago, the FIA World Endurance Championship held a race at CotA, a six hour affair marred by heavy rains, but it was still great.  There can be good racing here.  We just haven't seen it yet in F1.

That's right, not only do we get all three practices, but P3 and Quals are going to be shown on the Mother Network itself, NBC!  This is undoubtedly because of the huge upswing in viewers/ratings, up 93% from last year, up 39% from Speed's final year in 2012, and the best ratings for F1 in the US since 2002.  Viewership is averaging over 375000 people per race, outstanding numbers considering F1's status in the US.

And in an interesting note, the Missing Man from the Legendary Announce Team, Bob Varsha, will be taking to the airwaves of Austin's "Fringe 105.3 FM" on Saturday and Sunday to provide live commentary during P3, Quals and the race itself.  Even better, it'll be streaming on Fringe FM Austin.  I may just check it out during P3. 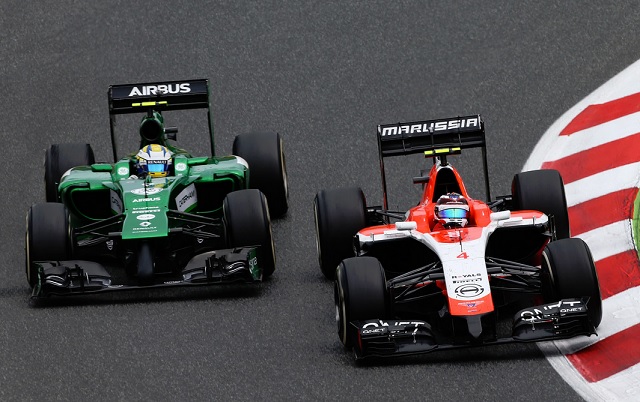 And yet, while the sport is celebrating unprecedented success in this country, two teams have gone under in the past two weeks.  It's no surprise that Caterham went down... I predicted that Japan would be their last race... but they've officially gone into Administration.  Essentially the last step before bankruptcy, the court Administrators have taken the team assets and are trying to sell it off piecemeal to pay back creditors.  If that fails, then bankruptcy happens.  What did come as a surprise is that Marussia has joined them in Administration.  Neither team will appear at the USGP, though it's not impossible that they might make it to Abu Dhabi.  Marussia in particular has reason to make that final race, as they are currently 9th in the Constructor's Championship, and only six points behind Lotus for 8th.  With double points on the table for that last tilt, there's a substantial amount of prize money available... rumored at thirty million dollars or more.  Except nobody knows if they're eligible for it anymore now that they've gone into receivership.  Oh, I'm sure the FIA does, and the team itself, but the rules are so opaque that they could be taken any way you want to take them.

So there'll be 18 cars on the grid, the smallest number since... um... the 2005 USGP, when six cars took the lights.  Quals should be pretty interesting is all I've gotta say!

It should go without saying that the F1Update! team will be all over this weekend... see ya then!

2 So whether Marussia is around much longer kind of depends on whether the people who run F1 want them around, as much as anything else.  Or are they done as a team regardless?

4 Steven, the name is pronounced "MA" as in the nickname for one's mother, and "russia" as in the country.

I have no idea how Bianchi's medical bills are being paid, and I can't seem to find anything.  Let me do some digging!

Ben, if someone wants to purchase Marussia out of Admin, they can take over the team.  Along those same lines, if a sponsor comes along to pump some cash in, the team can continue on.  They've said that they intend to be on the grid for the last race of the season.

Caterham, however, is pretty much dead.

5 Okay, some info on medical bills.  The teams cover the basic stuff, like sprains and the like, or even "minor" broken bones.

It's when you move into the bigger injuries, like Felipe Massa or Bianchi's, that things becomes a little more vague.  Teams, drivers, circuits and promoters all have different forms of insurance to cover injuries, loss of earnings, catastrophic damages, that sort of thing.  Lloyds of London, of course, is a big insurer of drivers, it appears.

The drivers' policies are often negotiated with the backing of the Grand Prix Drivers Association (GPDA).

It's possible that Bianchi's bills are being covered from three or four different sources... and that doesn't even include the possible support from Ferrari.  Bianchi has ties to the team from their young drivers program, and may even have formal paperwork with them.

None of this is 100% sure, but from various people I've asked and research I've done seems to indicate this.