F1 on TV: Singapore 2018 Gotta be quick about this one, I have to be back at work too soon.  So here's the track map for the Original Night Race, Singapore! 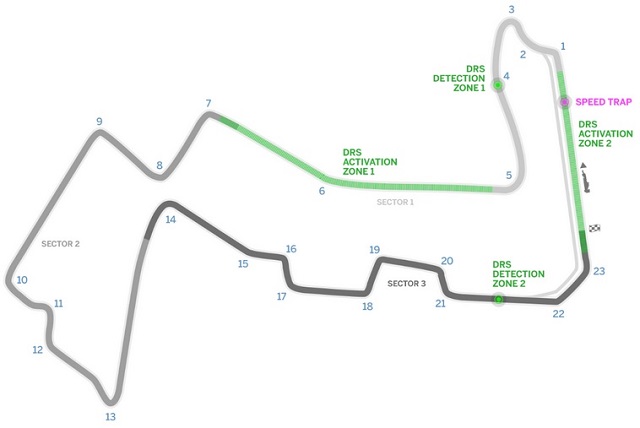 Last year's race saw rain for the first time in history, and the classic wreck of both Ferraris on the first lap.  Rain is NOT expected during Quals or the race this year, but that's what they said last year, too.  We shall see.
In more important news, the Silly Season hit its climax recently when Ferrari announced that Charles AMX-30 will be paired with Seb Vettel in 2019, leaving Kimi Raikkonen out in the cold so to speak.  Until about 15 minutes after the announcement, that is.  At that point, the Finn announced he'll be driving for Sauber in 2019 and 2020.  So essentially the teams swapped drivers.  Makes sense, it's not like Sauber uses Ferrari engines or anything.
On the face of it, Kimi's getting a demotion.  Being the #2 driver at Ferrari is pretty much better than being the #1 driver at anywhere else but Mercedes and (maybe) Red Bull.  However, a closer look reveals some interesting things to think about.  It's clear that Raikkonen is still a good driver, if maybe not as fast as his first Ferrari go-round.  On the other hand, Sauber hasn't had a knock-down Ace of a driver since 2009 when Robert (the stupid idiot moron) Kubica was in the car (back when they were BMW-Sauber).  Further, they haven't had THIS GOOD of a driver for a full season since 2005, when Jack Newhouse was on the team.  I don't know if the 2019 car is going to be any good, but having an experienced driver like Kimi helping them with development has no downside whatsoever.
And of course he's still the laff-a-minnit Finn we've always known.  In today's driver interviews, he was asked if he still had "the hunger to race."  His response?  "No, actually!  I'm just playing head games with you guys, deciding to sign for two years and not be happy!" Also someone asked "It wasn't your decision to leave Ferrari but it was your decision to go back to Sauber, just tell us why?"  "Why not?"   Comedy gold right there.
Right, Quals on Saturday, race on Sunday, see you 'round Space Cowboy!

1 I just about fell over laughing when I read that head games line. They'd been asking him the same question over and over, and he was sick of it. The other good one was when they asked if he was going to help Seb win and he said "I can only drive one car." Ouch!