F1 on TV: Russia 2016 This time around the F1 Circus finds itself in Sochi, Russia, home of the 2014 Winter Olympics... and of course the Sochi Autodrom.  It's among, around and through the leftover buildings and so-called glory of those Olympics that Our Favorite Form of Motorsports will be racing.  Let's take a look at the track map, shall we? 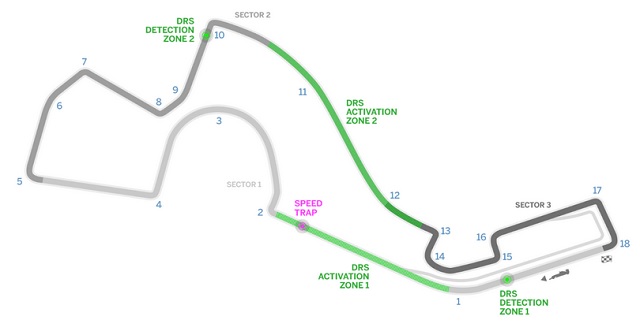 Nope, no change from 2014 or 2015.  That's unfortunate, because this race has not given us great events in the past.  The first race was run under the shadow of Jules Bianchi's accident, when nobody in particular really wanted to be there.  2015 saw wrecks a-plenty, a dull race, and a track worker nearly run over by Seb Vettel.  Now, one could say that the circuit has yet to get "a fair shake," as it were.  It's still awfully new, the events of the past two years have overshadowed the track, so on and so forth.  One less charitable could say that, because the circuit sucks Siberian Snow Cones, the events of the past occurred.  Go ahead, guess which view I tend towards, I dare you.

Look... it's really quite simple: there are 10 90-degree turns.  If you add in Turns 7 and 8, it becomes an even dozen.  Think those do anything to the flow of the track?  Or do you believe that stopping and starting and stopping and starting make for exciting racing?  Of course it's a Hermann Tilke layout.  I mean, sure, I suppose he did the best he could given the limitations of having to race through the Olympic Park, but... well.  They don't listen to my advice over at the FIA... they don't even reply, except for that one time with the restraining order... so no use in complaining.

The good kulaks of the Legendary Announce Team will be doing their usual coverage at the usual times... but let's check 'em out to make sure we're all on the same page, shall we?
Friday
Practice 2: 6a - 730a live on NBCSN
Saturday
Quals: 7a - 830a live on CNBC
Sunday
2016 Grand Prix of Russia: 6a - 930a live on CNBC

Note the long running time for the race on Sunday... I'm assuming that includes both pre-race buildup and "F1 Extra", the post-race coverage.  All times Pond Central, add an hour for those of you in Virginia, take two hours away for y'all in San Francisco, and but one if you're a relative of mine in Albuquerque, NM.

Actually, anybody in Albuquerque should take one hour off Pond Central time.  Just... y'know what?  Never mind.  Whatever.  Do what you wanna do.  It's yer thang.

We'll be along sometime after the race with the usual F1Update!, except maybe this time with energy and passion.  Or not.  We'll see.

1 That's... an awful lot of right-angle turns in what's supposed to be a speed race. I don't drive but I can only assume the drivers would find this track annoying at best.