F1 on TV!: Great Britain 2012 This is something I haven't felt in a while when it comes to F1: a little bit of excitement.  Because The Circus brings itself home... the teams return to Silverstone!  Here's the track map for the 2012 Grand Prix of Great Britain: 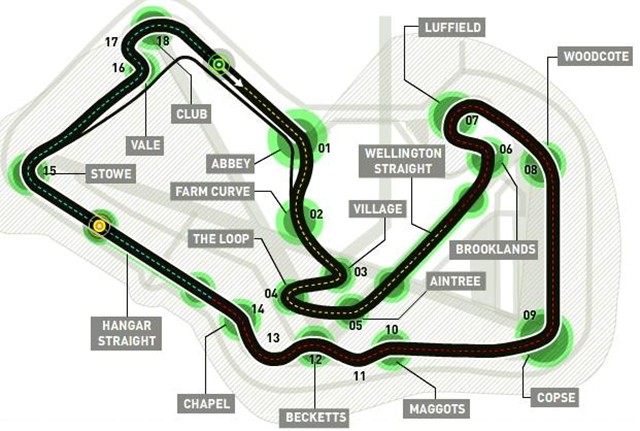 It's not the classic Silverstone.  Heck, it's not even the Silverstone of 2009.  The track used to go, for all intents and purposes, from Abbey to Brooklands.  The circuit was modified to host a round of the MotoGP championship, and to update the pit lane.  Said pit lane used to be between Woodcote (previously Turn 1

and Copse (which used to be Turn 1) and was about as old as any in F1.  Oddly, the new pit lane is the shorter route from Turn 15 to the start/finish line, even with the speed limit in the pits... in theory.  In practice, the FIA will bring down the wrath of god on anybody who tries that trick.

The new "Arena" section created some new passing opportunities, even moreso with the return of KERS, but overall the circuit is somewhat bipolar.  It's one of the fastest on the calendar with the highest average turn speed in F1, but there's a huge need for downforce here, too, thanks to the various near-hairpins.  The high-speed sweepers require great grip as well, so while Silverstone doesn't have the overall highest top speed, it's ridiculously quick.  Which makes it fun to watch AND drive!

I've said this every year, but Silverstone is the home of my favorite Turn... or, more correctly, sequence of turns.  The Maggots-Becketts-Chapel complex, when done correctly, shows off the incredible maneuverability of a modern F1 car as it whips to and fro.  It's a big reason why I'd rather watch a race here than anywhere else on the calendar (though Spa is close).

The weather forecast is for a standard British Summer day... in other words, windy and rainy.  It doesn't help that the circuit is actually built on the site of a WWII RAF air base, where high winds were actually a benefit.  As such, it's somewhat elevated above the surrounding terrain, having in effect its own microclimate.  This means that it's quite common for rain to fall during a race, adding to the fun.

So, all in all, it'll be a good racing weekend... I hope.  Of course, the Good Men of the Legendary Announce Team will be bringing us all the coverage we've come to expect, even during the FOX-based race.  Let's look at the schedule:
FRIDAY
P1: 4a-530a streaming
P2: 8a-940a live on SPEED
SATURDAY
P3: 4a-5a streaming
Quals: 7a-830a plausibly live on SPEED
SUNDAY
Pre-race: 1030a-11a tapedelay on SPEED
Grand Prix of Great Britain: 11a-1p tapedelay on FOX
Post-race: 1p-130p tapedelay on SPEED
REPLAY: 10p-1a on SPEED

Of course, all times are Pond Central.  Add one hour for the East coast, subtract two for the West, and subtract five for all those F1 fans amongst the Laysan Albatrosses on Midway Atoll.  We'll see you on Friday for coverage of P2!