F1 on TV: Britain 2009 Once again, F1 returns to the green lands of Albion and the legendary "birthplace" of Formula One, Silverstone Circuit (the site of the first official Formula One World Championship race, in 1950).  Once a RAF bomber base, hosting No 17 Operational Training Unit flying the Vickers Wellington, it now becomes the busiest airport in England on race day (thanks to the atrocious traffic jams on the limited access roads to the track, helicopter transportation is common).

Let's take a look at the track map for this legendary circuit: 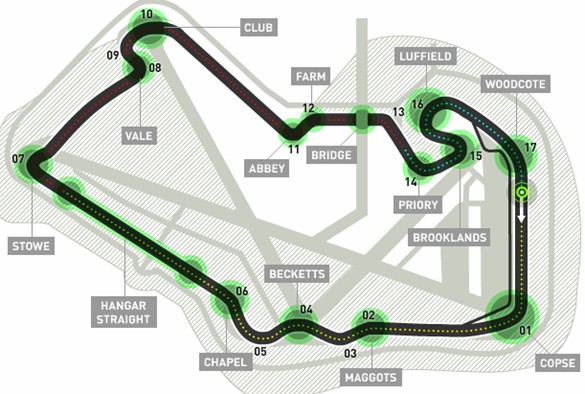 There is no better track to point out the incredible manueverabilty of a F1 car than Silverstone.  My favorite complex of turns in Formula 1 located here, 2 thru 6: Maggots, Becketts, Chapel.  Seeing a car zip through this left/right/left/right/left complex is awe-inspiring.  In fact, because most of Silverstone is high-speed corners it's the second-fastest circuit on the F1 calendar, behind only Monza which is nothing but straightaways with an odd turn thrown in here and there.

The setup for this jewel of a track isn't, however, low downforce and balls-to-the-wall.  Those fast turns require more traction than you'd expect, and as a result you'd want to look more towards a medium downforce setup.  At Monza, you could practically take the wings off and still be able to race... try that at Silverstone and you'd wind up in the grass immediately.

It's a tragedy that this is (theoretically) the final F1 race at Silverstone.  Beginning next year, the British Grand Prix moves to Donington Park, which is a nice circuit but it's no Silverstone.  So enjoy it while you can... and the good folks at SPEED will bring us their usual yeoman coverage, beginning with Friday's Second Practice, running from 8a to 940a.

Quals comes to us on Saturday, from 7a to 830a.  Will we see Britian's Button 'n' Brawn on pole?  Will Red Bull show who's boss?  Or will Toyota snap out of its funk?  My money's on Button, with Vettel #2.

The race on Sunday, however, will once again be on FOX, from 2pm to 4pm.  Again, that's Central Pond Time, so subtract two hours for, oh let's say San Francisco or Portland.

There'll be a replay on SPEED next Tuesday from 12n to 2p... so if you miss it on Sunday, there's your chance to see the last F1 race at Silverstone!

1 Ya gotta love a track which has a turn named "Maggots".

2 Alas, it was not named for the soft, legless larva of a fly or other dipterous insect that often eats decomposing matter, but for a nearby moor.

You can read up on the curve names at the Silverstone official website.

3 Thanks for the outstanding preview and the viewing info.  Although I really prefer to watch the races live, I won't complain as long as we get the Legendary Announce Team.  :-)

4 I miss the Silverstone layout of my youth, ultra-fast, and I can picture each turn and straight perfectly due to far too much time spend playing Revs.

I got to qualifying last year, and spend a bit of time at Farm, before moving to the top of a hill behind a stand coming into Abbey. You can get impressively close to the track at Farm if you want. Scarily close in fact, don't be fooled by the sharpness of the turn, the cars actually go through there at about 500 mph. Well at least it seems like it when they're heading right for you before zipping round.

You're entirely right about the comparison with Donington, it is nice enough, but it just isn't legendary. It is however supposed to be easier to get to (I may even test this out next year, if it happens).

My Jensen Button cap is genuinely in the post at the moment, which sums up what I'm hoping for this year

Looking at the satellite view of the track, I can see what you mean about it being faster once upon a time.

Turns 8 and 11 used to be a lot smoother. I bet they used to scream through that section of the track. Looks like you used to be able to floor it coming out of 5 and keep it that way until you got to turn 13, which is like half the track.

6 Yep, in that configuration it was second only to Monza in terms of being the fastest F1 circuit. And my recollections start after they put the chicane in at Woodcote (which is now either the wiggle in the pit lane entrance, or following a similar shape)

7 Wikipedia has a nice collection of trackmaps here.  It sure looks like the wiggle at Woodcote is now the wiggle in the pits, Flotsky... the 1975 to 1986 layout.

8 I just read that FOTA gave up on trying to reach a workable agreement with the FIA, and all of the FOTA teams that were 'conditional' are now withdrawing from Formula One for 2010 and launching their own series.  No word yet on the series name or any other kind of plan.  Given what happened with Champ Car/CART/IRL this can't be a good thing, but on the other hand I almost have to cheer for anything that might do away with the Mosely/Ecclestone/FIA mess we've had for the last several years.

9 David, like anything else in F1, I took that story with a grain of salt.  I still do; too many times in the past Darth Ecclestone and the Emperor Mosely have played brinkmanship games with the teams, sometimes for the most tiny of reasons and excuses... and one side or the other has always backed down, often after the "deadlines."

Until I read or hear something concrete from the FOTA bunch, like a race schedule or something along those lines, or from the FIA, like adding new teams to replace the FOTA guys, I can't believe that the breakaway is occurring.