F1 on TV: Germany 2014 Look, I'll be honest.  I'm not entirely excited about doing this post, so instead of half-arsing it, I'm going to make it really brief.  Here's the trackmap: 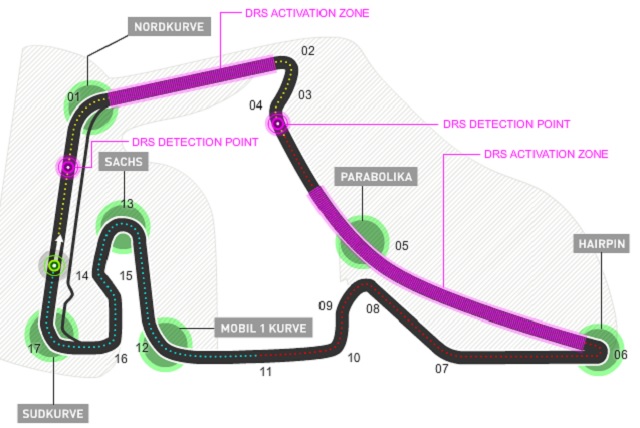 It's Hockenheim, the neutered version of the real circuit that used to have a huge blast into the trees.  It used to start at where Turn 2 is now, ran to the right side of your screen and about another foot besides, then looped back to where Turn 6 is now.  To say it was fast would be an understatement... and thus it had to go.  Well, that and it would mean that about half the circuit would be out of sight of cameras and fans alike.

Instead, we'll see the Silver Arrows dominating everybody else through the gentle sweep of the Parabolika, with the Legendary Announce Team doing their thing.  Here's the TV times:

I definitely won't be doing coverage for Practice 2, as I'll be in Milwaukee for a business meeting, then coming back to the store until 9pm or so.  I won't get home until maybe 10p or so... no way I'm gonna watch practice.  Quals and the race, though, yep.  See ya here then.