F1 on SPEED!: Korea 2012 Another week, another race!  This time, the trade winds blow the Ship of F1 to Korea, land of kimchee, bulgogi, M*A*S*H*, taekwondo, and the Korea International Circuit, home to the 2012 Grand Prix of Korea!  Let us take a look at the track map: 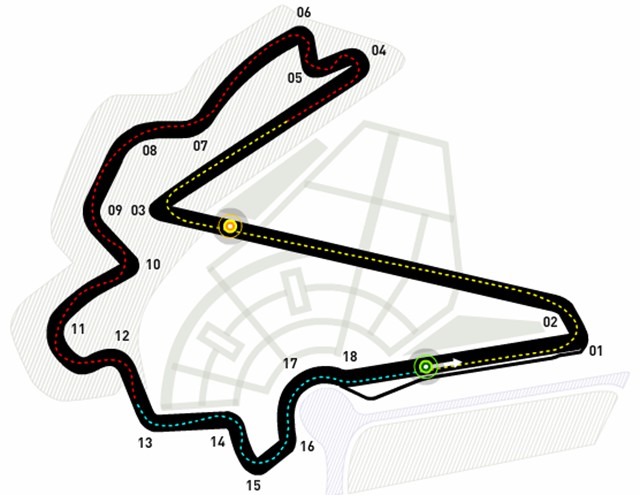 So, yeah, there it is.  Pretend I have something favorable to say about it, okay?  It's a challenge for the teams to get right, how about that?  Sound good?  The track goes through three long straights before switching to a spilled-spaghetti-style circuit with nary a straight line in sight.  There's only two real overtaking locations out there, at Turns 1/2 and Turn 3.  After that, you're on your own on any attempt and don't come crying to us when you find yourself sitting on a pile of carbon fiber instead of a car.

There was a lot of screaming about the pit-lane being unsafe at the first race, and they did a little bit of cosmetic work for 2011.  However, it still requires a car entering the pits to slow down... on the racing line... in a 150mph corner.  But wait, the pit lane gets even better!  The exit spits cars out on the outside of Turn 1, right where a skidding car coming down the front straight could run right into it.  Of course, it would never happen, right?  Oh wait...

The fact is, we don't really know how this track runs yet.  In 2010, we had the deluge.  In 2011, it was mostly dry, and apparently the weather in Korea this time of year can cough up anything at any time.  We shall see... for it's a track built about two inches above the water table, on reclaimed swampland.  The moisture from a drizzle will never go away, let alone anything heavier.

Fortunately, the Legendary Announce Team will do their usual sterling job helping us to understand what's going on!  Let's take a look at SPEED's schedule for race weekend, shall we?

F1U! will liveblog P1 for sure, maybe P3, perhaps Quals.  The miserable day I had Sunday after staying up late to watch the Japanese GP basically tells me that I'm too old for that sh*t anymore.  But be right here!  You know you want to!

UPDATE: This just in... playing at the F1 Rocks! festival in Korea will be PSY.  Yep, F1 goes Gangnam Style.  You know what that means...
...what it means is that Formula One Management has put in a copyright claim and had it taken down.  Feh.

1 Video has been nuked.