F1 on SPEED!: Japan 2012 When the F1 Circus rolled into Suzuka International Race Circuit last year, Seb Vettel clinched his second driver's championship.  What a difference a year makes, eh?  This year, he's 29 points behind HWMNBN and 16 points ahead of Kimi Raikkonen... ain't gonna be no coronation here!  While the fanatical Japanese fans miss out, it's great for all of us.  I suspect that only Italians at Monza  are more crazy about F1 than the Japanese at Suzuka.  And why not?  It's a fantastic circuit!  Let's take a look at the track map: 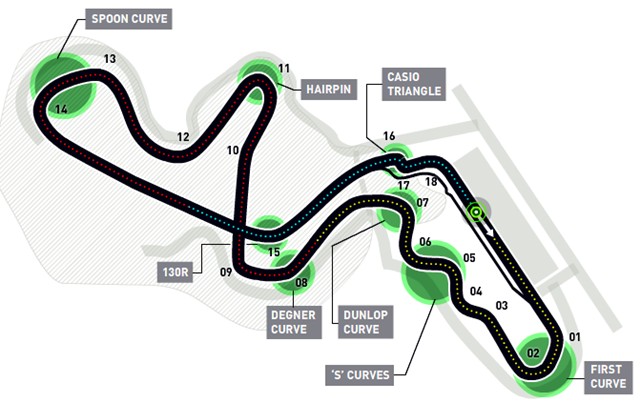 F1's only figure-eight circuit; fortunately, there's a bridge involved.  Really, if I didn't have such love for Silverstone and Spa, Suzuka would probably be my favorite circuit.  It's untouched by Tilke's talons, staying more-or-less the same since it opened in 1962.  The only changes made were the addition of the Casio Triangle, 130R being modified, and Degner being turned into two separate and distinct turns.  Other than that?  May as well be Showa 37 all over again!

Really, there's little to dislike about Suzuka.  There's no "mickey-mouse" turns here, they all exist for reasons other than to slow the track down.  And what turns!  The S-Curves are a rhythm section that if you get even the slightest bit wrong, will wreck your lap, yet are relatively quick.  The original Degner must have been a monster at speed; instead, 8 and 9 are still crazy tough.  Turn 12 is taken at nearly 180mph, leading into the unending, off-camber, narrowing-radius Spoon.  130R is even faster than 12, taken right around 190mph and might be more of a test of a driver's courage than Eau Rouge these days... and only the bravest or most foolhardy attempt to pass here.  The Casio Triangle chicane is the most likely passing place, and often enough ends up with carbon fiber shards flying.  It's a truly great track.  There's even some altitude change with a gentle increase from the S-Curves until 130R, when it drops back down to the Triangle.

One thing we learned last year is that the new surface is tough on tires.  The option tires lasted only 8-10 of the 53 lap race.  As we're aware, though, Pirelli has toughened the tires up this season, but it's not going to make that much of a difference.  I'd expect two or three stops during the race... unless it rains.  That's the big elephant in the pit lane, of course... we've had heavy rains here before, sometimes heavy enough to postpone entire sessions.  2010 was the last time we saw the Great Suzuka Boat Races down the pitlane, but it's always possible.  Obviously it's still early, but there's a chance of rain on race day.

Fortunately, the good ronin of SPEED's Legendary Announce Team will be bringing us all the coverage.  As I'm posting this early, I haven't found the streaming schedule for P1 and P3, but here's what I DO have:

Of course, F1U! will be all over the coverage as well; once we find out when streaming takes place, we'll probably try and liveblog.  See ya here!

1 I love this track in Forza 2/3/4...and I always hit Golden Triangle too fast in non-F1 cars.  I think this is another race I'm gonna have to find a way to watch.