F1 on SPEED!: Italy 2012 There are four classic tracks remaining in Formula 1.  The ridiculously confined street circuit, Monaco.  The birthplace of the sport, Silverstone.  The longest, hilliest circuit, Spa.  And then there is the fastest track, the immortal Monza, the home of the Grand Prix of Italy.  Let's take a look at the track map: 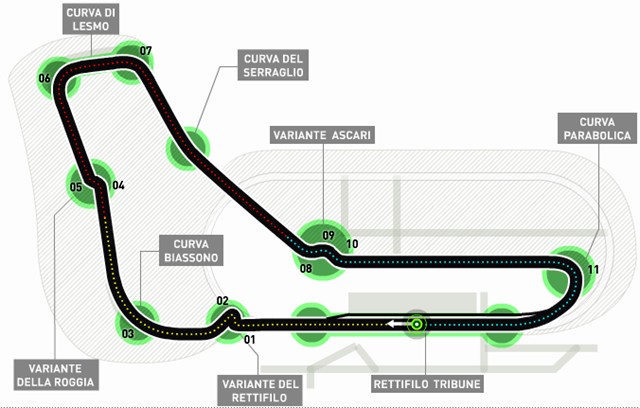 It's changed since those early days, shortened and slowed by the removal of some parts of the circuit, the addition of some chicanes, all in the name of safety.  Having said that, this is still the track that's the hardest on engines, with a full 80% of the lap spent at full throttle.  If a team could legally run a car without wings, this is where it would happen.

It used to be that the rear wings on F1 cars at Monza were more suggestions than actual downforce-creating devices.  Now with the introduction of DRS, teams actually carry a little bit of wing in comparison to, say, 2009 or 2010.  As it is, though, there's still remarkably little downforce used at Monza, all in the quest for straightline speed.

Which of course means that when you DO need to turn, it takes a lot of talent to keep the car on the circuit.  Parabolica is a particularly evil location; you break hard to enter, then accelerate all the way through a decreasing radius turn.  This is made all the worse when you realize you're doing this in a car that, at the best of times, is trying to cause you grievous personal harm as it runs along the ragged edge of traction.  Taking Parabolica without the usual amount of downforce must be... exciting.

Of course, F1 Update! will be all over it like a cheap suit on rice.  See ya then!