F1 on SPEED!: India 2012 SPEED's death march trudges on.  Reports are coming out now that the Legendary Announce Team may not even finish out this season, and that SPEED isn't going to make a big deal out of the GP of Austin.  While I understand their logic ("Hey, we're outta here in a few months, what does it matter?"), it's a slap in the face of all of their fans.  Potentially.  But hey, enough of that... let's talk about the second ever Grand Prix of India!  Let's take a look at the track map: 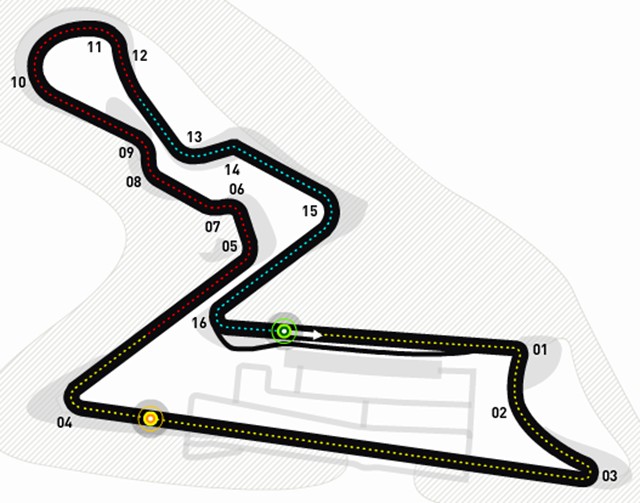 Proof that Hermann Tilke can design an interesting race track when given some terrain to work with, the Buddh International Circuit in Greater Noida, Uttar Pradesh, India is... well, actually, it's a lot like Korea and Abu Dhabi, but with one major difference.  Altitude change.  There's about 45 feet in height difference from the start/finish line to Turn 3 alone.  Sure, it's no Spa-Francopants, but very little is.  Last year, the circuit was very dusty, meaning that one got off the racing line at serious risk of flaming death.  With luck, that will have been dealt with this time around.

Turns 3 and 15 are blind, with 15 having a drop-off at the end of it.  The long run from Turn 3 to 4 goes downhill to around the halfway point, where it then begins to climb up again.  The track's big party piece, though, is the Turn 10-11-12 complex.  If you remember Turkey's Quad-8, it's kinda like that, except this one is banked, uphill, and faster.  It also has two distinct lines through it, or at least it would have if it hadn't've been so dusty last year.

It's a low-end of medium downforce circuit that isn't particularly hard on tires.  Some of the curbs ARE hard on suspensions, however, as Felipe Massa learned last year.  In fact, the rumblers of Turn 8 have officially been named "Massa's Curbs".  We've not gotten a reaction from the Brazilian yet, though one probably can imagine that it's not going to be particularly positive.  Brakes aren't abused much here, but the engine does get a lot of full-power running.

At least for this race the Legendary Announce Team will get to do their stuff in the professional manner we've become accustomed to.  Unlike SPEED's website, which has apparently decided to make finding out any information about the program times as difficult as possible; take everything below with a grain of salt.
THURSDAY
P1: 1130p - 1am streaming
FRIDAY
P2: 330a - 500a live
SATURDAY
P3: 1230a - 130a streaming
Quals: 330a - 500a not quite live
SUNDAY
2012 Grand Prix of India: 400a - 630a live

Consult your local guide.  I don't think I'll be liveblogging P1.  See you here on Friday!