F1 on SPEED!: Hungary 2012 I'm sure there are mixed feelings in the hallways of SPEED! right now.  On the one hand, their flagship series, Formula 1, has finally returned to their control after four races in the claws of the FOX mothership.  On the other hand, their midseason debut race is... the Grand Prix of Hungary.  Yee-eee-shhhhh!  Still, it's theirs and nobody can take that away from them.  Let's take a look at the track map: 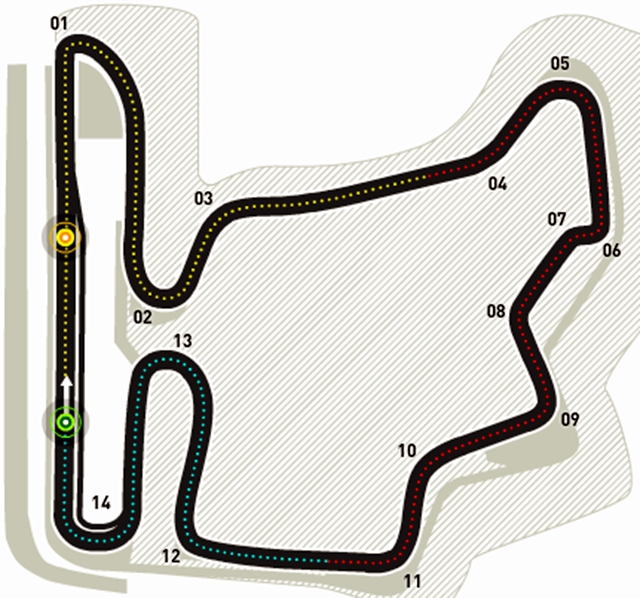 Yee-eee-shhhh!  Okay, look, it's no secret that the Hungaroring is my least favorite circuit on the calendar.  I like it even less than the bland and repetitive Tilkedromes.  To give it the credit it's due, the track is supposed to be outstanding for those in attendance.  It's built into a natural bowl, so I gather you can see most of the track from where-ever you sit.  So it's got that going for it.  Which is nice.

Of course, that same natural bowl traps what humidity there is, and it's the height of summer when the F1 Circus sets up the tents, so the heat generally reaches what the weather nabobs call "god forsaken".  Oh, and it's usually quite dusty, so the track never really rubbers in.  In other words, it's a bloody hellhole to race on.  Some drivers claim to like the place, but the majority despise the place.

Unless it rains.  Then all bets are off and Jenson Button wins.  See, it's only rained twice during the race, in 2006 and 2011, and Button has won both of them.  Let's see if it's a good time to bet on ol' JB... (rapidly checks Budapest weather forecast)... nope, sunny and hot.

Of course, F1 Update! will be all over the weekend like a cheap suit on rice.  See you then!

2 Turn 1.  To be fair, with the new tires and KERS, there's probably more chances than there ever was before, but for the most part it'll take someone gutsy to pass anywhere other than Turn 1.

3 So the passing opportunity is to use your brakes late after the stretch. Is that it?

5 We've had some gutsy passes this year, though... Raikkonen's move last week, etc.

I think I'm starting to get what makes a track "flow". You put in a lot of corners like the 12-13-14 complex, it's just "go fast go slow go fast go slow" and staying near the racing line is imperative. But string some shallower curves together and you get the opportunity for multiple racing lines and even a little scissor passing...

But if I can get that much, why can't Tilke?

6 Is there a regulation about the width of the track? If you had shallow turns and the track was twice as wide as it is now, seems like you could get some pretty exciting racing going.

7 Well, THAT was an interesting search!  Steven, there are regulations regarding the width of a track; you can find the relevant FIA document here.  Article 7.3 says the minimum width for a permanent circuit (such as what's going up in Austin) is 12m.  The minimum width of the starting grid thru the exit of Turn 1 is 15m.

Existing tracks looking for accreditation can be okay'd if they don't fit the regulations as long as there have been international races run on it in the past... for example, Laguna Seca (I refuse to call it by its current name) probably wouldn't pass the specs, except that it's been around forever and it works.

8 So there is no maximum width, then? that was what I was wondering about. I bet a wider track, especially with a series of left-right-left-right turns, would permit a lot more passing.

9 Well, Valencia is probably the widest circuit on the calendar... and it blows goats.  Allegedly.  NTTAWWT.

I'm not saying you're wrong, but it seems like even perfectly wide tracks are getting harder and harder to pass on because of tire clag buildup.  If you get off the racing line, you end up with no grip as you careen towards the walls.  *shrug* I think you need to have a better track designer more than anything else.