F1 on SPEED!: China 2008 One year ago, Lewis Hamilton could have clinched the Drivers Championship as a rookie... and instead drove his car into a graveltrap the size of a postage stamp.

THIS year, Lewis Hamilton can clinch the Drivers Championship in his second year.  Let's take a look at the track map, shall we? 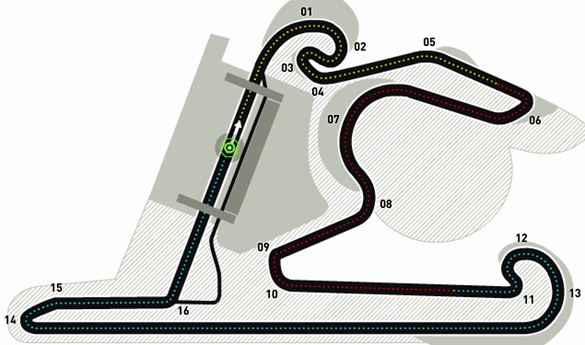 Allegedly designed to mimic the Chinese character "shang", meaning "ascend", it's the prototypical Hermann Tilke circuit: twisty and impossible to pass on.  It seems telling that the only lasting memories I have of the Shanghai International Circuit are uniformly negative: Hamilton in 2007, and in 2005 the double-whammy of Slappy Schumacher running over the Minardi of Robert Doorknob on the way to the grid and Juan Pablo Montoya's race being ended by a drain cover.

I'm not fond of this circuit, as you can tell.  It's dull.  The only signifigance to the race at all is it's location on the calendar: someone can win a championship here.  It's a medium downforce track, not particularly hard or easy on brakes, the medium tire compound is favored, a little over half the lap is run at full throttle... in other words, an average track.  The only little bit of flavor on the track is the turn they call "Indianapolis", which if memory serves is Turn 13.  It actually has a little bit of banking, making it now the only banked turn in F1.

Essentially, Shanghai is like the old joke about Chinese food: in an hour, you want more.

The good burghers at SPEED will be bringing us live coverage of everything from Shanghai, beginning (as usual) with coverage of Friday's Practice 2 from 1am to 240am.  Quals are on Saturday at the same time, 1am to 240am.  The Grand Prix of China is on Sunday, from 130am to 4am, with a replay from 130pm to 4pm.  (all times central)

Of course, F1U! will be here as well... will we have a champion?  Or will we have to go to Brazil to find the answers?  See you then!

2 Actually, Shanghai, like most Hermann Tilke-designed new tracks, has no chicanes at all.

Chicanes are added to slow a track down.  As an example, Monza has the Variantes Ascari and della Roggia, neither of which existed back in the time of really high speed F1.  Shanghai, being a new circuit, has the slow-downs already built into it... other than the two straightways, both of which are followed by sharp turns, there just isn't enough space to get to really high speeds on the track.

So, older circuits have chicanes, newer ones don't.  I'm sure there are exceptions, but my sleepy-befuddled brain can't think of one right off the bat.

3 I'd describe a chicane as something "done" to an existing circuit. Take turn one at Monza... the track still goes straight there (now they call it run-off and filled it full of foam barriers...) and they added that goofy right-left flick to slow the cars down. It's like giving the Mona Lisa a black-eye.

I tried to find this course on Google Earth, but their photos were old enough so that what they showed was the construction.

I think, anyway. Is this it?

6 Well, Googlemaps seems to indicate that it is, but I'll be darned if I can see it.  No, wait... yep, that's it.  The lower-right portion of the picture shows the run from Turn 5, all of Turn 6, and the run to Turn 7.

It's hard to tell, though.

Regarding Monza, you're absolutely right.  Before the Variantes were inflicted upon the circuit, it ran very much like a NASCAR oval track.  You did slow down for the few curves, but it wasn't much and it wasn't for very long.

Actually, the OLD Monza was even more balls-to-the-wall.  Hmmm... there's a post there, I think...

7 So victory would be decided by qualification, pit stops, and mistakes?