F1 on SPEED: ITALY 2008! Just to get it out of the way, McLaren officially filed their protest regarding the 25sec penalty levied against Lewis Hamilton at Spa last week.  Nominally, Felipe Massa is still the winner, and will as such until the protest is heard "at a time forthcoming."

So with that spectre hanging over our heads, let's get our focus out of the backrooms of the FIA and on the track, where it belongs.

And what a track it is.  The track where speed is king, the circuit where speed was born, one of the legendary racetracks in all the world, La Pista Magica: 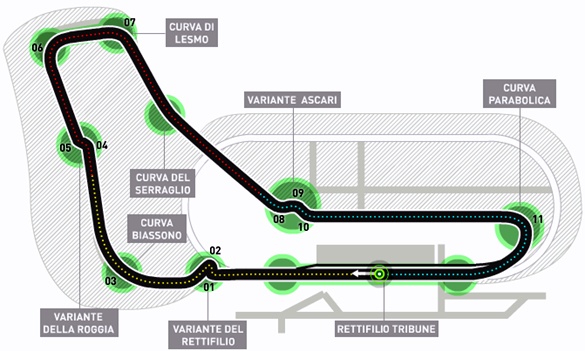 A casual follower of the sport would look at Monza and say "why is this legendary?"  And in comparison to tricky technical circuits invented by Hermann Tilke, they'd be right.  It's not a particularly challenging-looking track... only 11 turns, 7 of them in three chicanes?  That's nothing!  But turns are not what Monza is about.

Monza is about nothing but flat-out, engine-killing speed.  77% of a lap at this circuit is spent with the gas pedal jammed through the floorboards, the highest percentage in F1.  Drivers hit 210mph just before turns 1, 4, 8 and 11... and turn 11, Parabolica, is perhaps the fastest curve in F1... 178mph if you're doing it right.  Strangely, it's followed by one of the slowest, Variante del Rettifilio.  From 210mph to 45mph in less than 100 yards.

If you could only have four circuits in F1, Monza would have to be one of them (I'd say Spa, Monaco and Silverstone for the other three).

Of course, our friends at SPEED will bring us their usual coverage of the race weekend, starting from 7a to 840a Friday morning with live coverage of 2nd Practice.  The track has been around for so long, however, teams barely need the practice.  Still, they'll be out there driving the tires off.

On Saturday, from 7a to 830a, we'll have plausibly live coverage of Quals.  With a high-speed track like Monza, passing is a little tricky, so a good position on the grid is crucial, perhaps moreso than most places.

Then Sunday brings the tifosi out to cheer on Team Ferrari, who's factory is just down the road.  The coverage begins at 630a, and goes until 9am.  See how the FIA stewards will bend McLaren over this time!  Who knows who'll be leading the Driver's Championship afterwards?  We'll know afterwards!

Of course, F1 UPDATE! will be here all weekend as well!